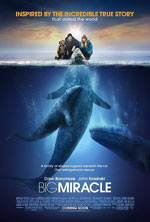 Inspired by the true story that captured the hearts of people across the world, the rescue adventure Big Miracle tells the amazing tale of a small town news reporter (John Krasinski) and a Greenpeace volunteer (Drew Barrymore) who are joined by rival world superpowers to save a family of majestic gray whales trapped by rapidly forming ice in the Arctic Circle. Local newsman Adam Carlson (Krasinski) can't wait to escape the northern tip of Alaska for a bigger market. But just when the story of his career breaks, the world comes chasing it, too. With an oil tycoon, heads of state and hungry journalists descending upon the frigid outpost, the one who worries Adam the most is Rachel Kramer (Barrymore). Not only is she an outspoken environmentalist, she's also his ex-girlfriend. With time running out, Rachel and Adam must rally an unlikely coalition of Inuit natives, oil companies and Russian and American military to set aside their differences and free the whales. As the world's attention turns to the top of the globe, saving these endangered animals becomes a shared cause for nations entrenched against one another and leads to a momentary thaw in the Cold War. (from MovieWeb.com)

Inspired by a true story, Big Miracle is the tale of three gray whales that got trapped in an ice patch in Alaska. This all took place twenty-four years ago in 1988, and director Ken Kwapis (He's Just Not That Into You, License To Wed, TV's The Office) does his best to capture the time in which the story was originally set in. Instead of trying to modernize such a story, Big Miracle is given an historical spin which gives viewers a glimpse into the political climate of the late 80's. What's strange about a film like this one, however, is that it's quite possibly too whale-centric, as just about every action, thought, consideration, conversation and debate--across the world--is about these three stranded whales. 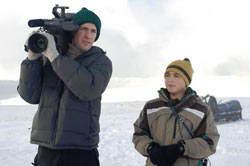 If you're at all into politics, Big Miracle is likely either to offend or commend your beliefs. Drew Barrymore embodies Rachel Kramer, an activist at Greenpeace who learns of the endangered whales and devotes her time, resources, and voice to sparking any kind of action to save these animals from freezing to death and drowning under the ice. However, Barrymore's character is hardly even remotely likeable as she takes every opportunity (and I do mean every one) to ruffle feathers and make her voice be heard. It's the kind of character that strips the romance from a "romantic comedy" and makes it difficult for the viewer to understand what the male lead in this story could ever see in his female counterpart. When the story opens and we learn that Adam Carlson, played by John Krasinski, is no longer in a relationship with Rachel, it becomes apparent as to why when we first meet her character on screen. Then Rachel spends nearly every succeeding minute in the film doing her best to be as abrasive as possible. Meanwhile, Krasinski channels his character Jim Halpert from The Office into Adam. There's barely a hint of difference between the way he plays these two characters, but it works well enough, regardless, for this story. Still, if Office fans are hoping to see Krasinski branch out a bit from his usual "Jim" performance, Big Miracle isn't it (and if they're hoping to see "Jim" as an aspiring Alaskan reporter, they'll get exactly that).

It's just unfortunate that a family film about the rescuing of three whales trapped under ice in Alaska should be a thinly veiled ultra pro-environment, anti-Reagan political film. As you watch the film, you realize the story could very well go in the direction of being more about politics than saving these creatures, and Big Miracle ends up landing somewhere in between the two. Some may feel there's a "good" balance here, but for me, personally, it marred the entertainment value greatly. It's one thing if Kwapis seeks to make the environmentalist heroine seem like the only sane and likeable character in the film, but she's so obnoxious that she makes nearly every scene she's in less enjoyable. Then there's the rescue effort that involves a colonel and someone from the Reagan administration that takes plenty of opportunities to make our president of that time look bad, while taking some pot shots at the forthcoming Bush administration. This obviously won't offend most, but I'd rather not choose to see a family film like this at all just to discover that there's some kind of political agenda behind it all. At the same time, as the movie unfolds, you see millions of dollars and immeasurable efforts being made to rescue three whales when there, quite honestly, are greater issues in the world at the same time that could such resources. Of course, the politics of media and what story is spiking the news ratings most also pushes the rescue efforts forward, but while we all want to see these animals rescued, you have to wonder if the prices paid and the sacrifices made are worth it all. 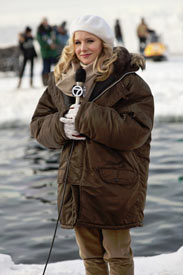 With all of that said, is there anything redeemable about Big Miracle? While I wasn't a fan at all of the political material of the story, many of the peripheral characters and plot elements make Big Miracle an interesting story. Krasinski is still fun to watch, even if the role isn't particularly challenging for him, and Kristen Bell serves well as a good distraction for him as a reporter he idolizes. Kwapis does a good job coloring the background with enjoyable characters, too. The local eskimos get involved in the story as they have to deal with the sudden flooding of outsiders coming to report on the whales or help out with the rescue. A local boy who has befriended Adam represents the young eskimo culture while his grandparents are often shown trying to teach him the ways of their heritage. Lastly, Ted Danson plays some kind of quasi-villain as an oil tycoon more interested in publicity and money than actually saving the gray whales, and a pair of guys from Minnesota who pitch in the use of their own homemade de-icers are a hilarious addition. Once the tension begins to build during the rescue process, Big Miracle really seems to find its footing. And if you're not familiar with the real story behind the film's inspiration, than you're likely to be more anxious to see how it all will be resolved as it unfolds.

The content for Big Miracle is pretty mild, with the only concern being some language. Roughly ten uses of "h*ll" and about 4 uses of "d*mn" make up the most of the profanity, with a little blasphemy is also in the mix (in the form of "Oh G-d" and "Oh my G-d"). Otherwise, just some tender-looking flesh on the end of the nose of one of the whales is about the extent of anything graphic or "violent." Overall, it's a pretty tame film for the family--if the political elements aren't too offensive for the adults or too boring for the kids.

Big Miracle is one of the better aquatic animal movies you can see these days (it's handled more realistically than cartoony like some family movies tend to do); it's definitely being better than last year's Dolphin Tale. A good cast and entertaining story keep the movie's watchability up, but those looking for just a sweet little film with no other agenda than to show us a good animal rescue story will be greatly disappointed.

Blood/Gore: The whale Bam-Bam has some of the flesh on its nose looking cut up and tender from hitting it against the ice

Violence: Unless you consider chain saws being used to cut ice or a large ship being used to ram/break up ice there isn't much violence; Some guys carry Rachel out of a meeting kicking and screaming after she was being disruptive; Colonel Scott throws some stuff around his office in anger Disclaimer: All reviews are based solely on the opinions of the reviewer. Most reviews are rated on how the reviewer enjoyed the film overall, not exclusively on content. However, if the content really affects the reviewer's opinion and experience of the film, it will definitely affect the reviewer's overall rating.

Love & The Outcome You Got This - EP [Provident]