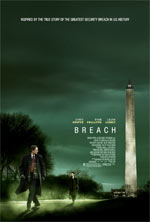 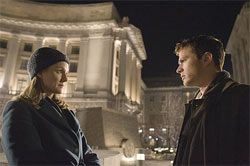 Based on the novel "The Eleventh Hour" by Adam Mazer and Bill Rotko and inspired by true events, Breach is a dramatic thriller set inside the halls of the FBI - the gatekeeper of the nation's most sensitive and potentially volatile secrets. The story follows the investigation and arrest of the agent Robert Hanssen, who created the most damaging leak of classified information in U.S. history.

In 2001, the FBI caught the most damaging mole inside the organization that this country has ever sustained. Breach is a drama that tells the story of young FBI agent Eric O'Neill who was assigned to catch suspected FBI agent Robert Hanssen in the act of leaking top secret information to the Soviets and help bring him to justice. Dramatic actor Chris Cooper steps into the shoes of Hanssen in this dramatized true story, delivering a strong and convincing performance as a family man with dark secrets.

Breach probably takes plenty of artistic license in trying to create a story worth telling on a big screen. The story is slow-moving, presented in a paced, mysterious fashion, using character development to carry the picture forward. With a film like this, then, you need the best acting to make it work. The first thing Breach has going for it, is the casting of Cooper as Hanssen. He seems like your no-nonsense, God-fearing family man, initially fooling O'Neill who buys every bit of this side of Hanssen. But when O'Neill's boss Kate Burroughs, sternly and wonderfully played by the versatile Laura Linney, reveals the truth to O'Neill, the creepy secret life of Cooper's Hanssen begins to unfold.

The weakest chain in what strings Breach together is the casting and resultant performance of Ryan Phillippe as Hanssen's aide and agent-in-training Eric O'Neill. Phillippe is a stark contrast from Linney and Cooper who draw so much emotion and reality from their performances. Phillippe is dry at best, often carrying a blank expression through most of the film. And when it comes time for him to actually show some anger or emotion, it feels not only forced, but as if the recipient of this inflection will soon burst out laughing at him and ask for another take. Even Colin Farrell offered a stronger performance in his C.I.A. vehicle The Recruit when he was up against the intensity of Al Pacino. But what Breach needed for a more powerful end result is a believable and captivating actor in O'Neill's place, which it sadly does not have. 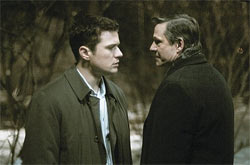 Other than acting, Breach doesn't have much to stand on besides the tense moments director Billy Ray can create using basic facts about the real story -- like O'Neill trying to get information away from Hanssen in a short amount of time and not leaving traces that he'd been there. Little thriller moments like that that come rather frequently in spy / espionage movies are what keep the film interesting. But in the end, it's the human element and Cooper's eerie demeanor that work best for this sort of film.

There's a strong spiritual element from beginning to end with Breach, but it's questionable due to the way it's used. Robert Hanssen displayed a strong faith in the Catholic beliefs, attending church almost everyday, and prayer and the subject of God was frequently brought up when he and O'Neill would talk. Eric's character apparently had a background in the faith as well, but Phillippe delivers it implausibly, to the point where it's hard to believe that Hanssen didn't see through his lies about it. Instead, it merely seems that O'Neill only ever exercises any kind of faith to appease Hanssen, whether or not that is really the case. In the end, Breach doesn't seem like a PSA against Catholicism or the belief in God, but just that evil can lurk in the most unlikely places. The film also seems to hint that Hanssen may have been tormented inside, which could partly be why he found himself in the confession booth so often.

Content is rather mild for this genre, but undoubtedly earns the rating of PG-13. One "f" word is shouted by Phillipe's O'Neill, and a handful of "s" words and other colorful words are uttered. There's talk of Hanssen having fooled around with other women, but none of that is seen, while O'Neill does discover a tape Hanssen was mailing to a friend of himself and his wife in bed together (we briefly see Robert on top of his wife in some amateur footage of them together and some movement, but there's no nudity). Finally, some gunshots fired are the extent of the violence, while a flashback shows two dead bodies on the ground with a little bit of blood on the ground underneath them.

Overall, Breach is a good espionage film for those who like good acting and can forgive Phillippe's presence. While not the most vulgar thriller you'll see this year, it's still too much for younger viewers and the sexual material alone is proof of that.

Sex/Nudity: A few comments about Robert messing around with other women are made between Eric and Kate; We see Bonnie in her nightgown while praying; Kate makes a comment about Robert liking "rough sex" with his wife; Eric opens Robert's mail that he asked Eric to take for him, and finds a video cassette. Eric watches it and finds that it's a tape of Robert and his wife Bonnie in bed having sex. We see this in a closeup view on the TV, so it looks grainy without a lot of detail, but we hear the sounds of them and see a little movement; Juliana finds the tape and watches it and we hear the same sounds (but don't see the footage) as she asks Eric about Robert making "porno" tapes of Bonnie; Robert shows Eric a scene from Entrapment on his laptop that shows Catherine Zeta Jones in bed as she pulls a sheet over herself to cover up any nudity. He talks about how attractive she is to Eric.

Alcohol/Drugs: Robert and Eric discuss the latter's favorite drink to see if Robert could tell if he's lying; Juliana and Eric have drinks at the table for with their meals; Robert appears very drunk in a scene where he picks up Eric and drives off drunk behind the wheel.

Violence: We see a flashback of a man shooting two KGB officers in the back of the head (we don't see the impact, just the gunshots); Robert fires a gun at another man several times to try to get him to tell the truth, but no one is hurt. Disclaimer: All reviews are based solely on the opinions of the reviewer. Most reviews are rated on how the reviewer enjoyed the film overall, not exclusively on content. However, if the content really affects the reviewer's opinion and experience of the film, it will definitely affect the reviewer's overall rating.