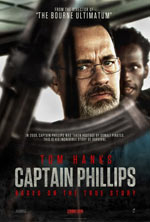 The true story of Captain Richard Phillips and the 2009 hijacking by Somali pirates of the US-flagged MV Maersk Alabama, the first American cargo ship to be hijacked in two hundred years. (from MovieWeb.com) 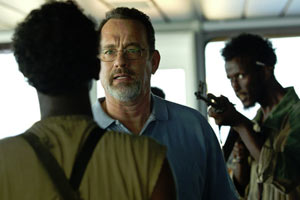 If you watch a lot of movies, you'll end up seeing all kinds, including big budget types and indie films. And watching a lot of motion pictures can shape what you view as good, quality entertainment and what you find to just be really poorly constructed attempts at presenting a story or message. Director Paul Greengrass, who's most known for directing the two Matt Damon-helmed Jason Bourne sequels, The Bourne Supremacy and The Bourne Ultimatum, has a very distinct documentary-style way of directing that's unmistakable. It's something that brought realism and grit to the Bourne sequels and has earned Greengrass notoriety as a filmmaker.

Paul Greengrass's latest venture, Captain Phillips, is based on the true story of a freight ship that was taken hostage by Somali pirates in 2009. Greengrass uses his trademark filmmaking techniques to lend a tense, pulse-pounding realism to the story that makes it altogether exciting and unsettling. And what's most unnerving about a film like this is that, while it has been adjusted for Hollywood entertainment, it's an event that has actually happened. And Greengrass refrains from giving characters "superhuman" or outrageous abilities; you won't find a Jason Bourne anywhere. These actors play real, tangible people. There's indeed some embellishment and liberties taken with the facts of the real events that unfolded involving the titular character (and some poking around the Internet reveals that there's quite a bit of controversy about what really went down in the true story), but what Greengrass has made here as a feature film is nothing short of fantastic. 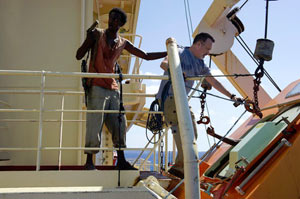 The shaky camera work was something that people really hated about The Bourne Supremacy and something that Greengrass toned down for Ultimatum. He uses it a lot here, but it does add to the feeling that what you're watching was documented by a crewmember of the ship, Alabama. Granted, Greengrass doesn't go as far as treating the film like it really is filmed by a documentary crew; that's not what this movie is. Instead, it's still told from the perspective of a onlooker, but Greengrass gets the audience right there in the action, even going so far as showing us the Somali pirate recruiting moment. He opens the film with Captain Rich Phillips saying goodbye to his wife before the trip in the modern, "comfortable" living conditions of the United States, and then the director takes us to the desperate, impoverished streets of Somalia. It shows you the contrast of living conditions, and it shows you the stark differences between the lifestyles of the people involved. Greengrass clearly has no political agenda behind the movie here, but he helps bring a rounded humanity to this film, so that when the finale unfolds, it leaves you with a punch that wouldn't be there if he hadn't presented these characters as what they are: real human beings. There's plenty left to ponder, too, about the choices characters make in the film.

What helps make Captain Phillips work so wonderfully is a perfectly assembled cast of actors. There isn't a weak person in the bunch, with powerhouse Tom Hanks leading the pack, and it makes the movie very believable. Even the actors who play the pirates are so perfectly cast, it's difficult not to believe that these guys are for real. They have the look and acting chops to make you believe that they mean business and have real motives and reason for taking the Alabama hostage. Hanks, who has a background in comedy and has successfully transitioned to a reliable dramatic actor in the past couple decades, plays the everyday man beautifully here, and in the final scene of the film, he gives a moving performance that begs to be earned an Oscar. 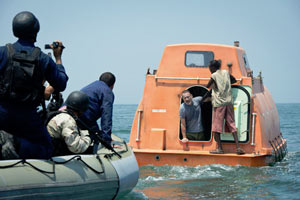 The content for Captain Phillips is intense but probably not quite what you'd expect from a modern PG-13 film (except for one brutal scene). The profanity is shockingly minimal, with just about 3 uses of the "S" word and a couple uses of blasphemy. Some of the language is translated in the subtitles, but it's quite infrequent. There's a lot of violence sprinkled throughout the film; most of the gunfire is idle, but there's some beating/hitting and roughing up of Captain Phillips, and a couple scenes involving the pirates are a bit bloody. Early in the film, two Somalians get in a fight where one hits the other in the head with a wrench, with bloody results. On the Alabama, a barefoot pirate steps on glass and we see his bloody foot several times, including him pulling out shards of glass. Another instance involves a pirate with a bloody hand from a cut. Finally (and this is sort of a spoiler), when a couple characters are shot, we see blood splattered all over several walls and on a survivor. We later see some more dried blood on a victim's face and body. This scene is quite emotional which adds to the graphic nature of it.

Overall, Captain Phillips is an impactful film with incredible acting and masterful direction by Paul Greengrass. Some may feel that the film drags at times, and I have to admit that some sequences do go on for a bit long (in particular, the whole lifeboat sequence probably could have been shortened a bit, but to Greengrass's credit, it adds to the building tension and hopelessness of the situation). Despite the debate on whether or not the real Captain Phillips was a hero, the film Captain Phillips is a great drama with brilliant acting and direction. It's easily one of the best movies of the year.

Sex/Nudity: None. Some guys are seen shirtless, but it's not sexual.

Alcohol/Drugs: The pirates eat a plant drug called khat throughout the film and when they run out start to go through some kind of withdrawal.

Blood/Gore: One of the pirates has a scar over his eye; Muse hits a fellow pirate in the head with a wrench and we briefly see lots of blood on his head as he lays unconscious; A pirate steps on some broken glass and we see his foot all bloodied with some glass sticking out of it. He then pulls out the shards. We later see his bloody foot several more times; We hear that a pirate has been cut and we briefly see his bloody hand; Phillips has some blood coming from his nose and his head after being hit multiple times; SPOILER: several men are shot and we see blood splatter through sniper scopes on impact and then splattered in graphic amounts on surrounding walls. A survivor has some blood of their own on their head. They also have blood of others splattered all over their shirt, body and arms.

Violence: Muse hits a fellow pirate in the head with a wrench and we briefly see lots of blood on his head as he lays unconscious; The pirates fire on the freighter several times, almost hitting some people on board; Pirates shoot locks and doors to get around the ship; The pirates point guns at people and threaten to shoot a hostage in the head, but don't; A pirate steps on broken glass while barefoot, lacerating his foot; The ship's crew overpower a pirate and we hear his hand was cut and see the wound and a knife; The crew take a pirate hostage while the pirates take Phillips hostage. They go to make an exchange and send the pirates away in a lifeboat but they force Phillips into the capsule; The pirates rough up Phillips some over the course of the rest of the movie, with the pirates shouting at him and each other; Phillips bandages up the pirate with the injured foot and the pirates freak out when they see he's using a knife from the First Aid box to cut the gauze; A man pushes another man into the water and then dives in, swimming and dodging bullets. The person is then caught, beaten and threatened at gunpoint; Several characters are executed by shots in the head while a survivor is tied up with some head injuries; A man is held down and cuffed. Disclaimer: All reviews are based solely on the opinions of the reviewer. Most reviews are rated on how the reviewer enjoyed the film overall, not exclusively on content. However, if the content really affects the reviewer's opinion and experience of the film, it will definitely affect the reviewer's overall rating.