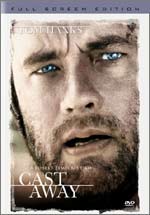 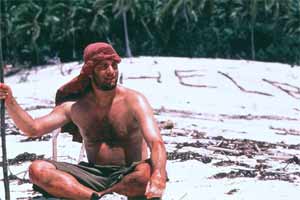 Chuck Noland (Tom Hanks) is a FedEx executive who's job is his life, along with his girlfriend Kelly (Helen Hunt) On Christmas Eve, he takes a FedEx plane on a job and the trip goes horribly wrong when it crashes in the Pacific Ocean. Chuck becomes the lone survivor of the wreck and finds himself, the next morning, alone on a deserted island with nothing but a few FedEx packages that have washed up on shore. Then it's up to Chuck to try to survive alone, leaving all the modern conveniences to try to fend for himself and keep his mind at the same time. Will he ever get back home?

Wow. I heard some critics say you will leave the theater in awe, and I found they were right. In fact, you will watch this film in awe. Tom Hanks delivers an amazingly phenomenal acting performance, creating an interesting story and an interesting well-rounded character who often has little to no dialog for a good hour of the film. It's funny, it's visually exciting, it's touching, and it's very sad. I left the theater realizing how much we take for granted each day. We take for granted our most basic necessities-- from our shoes to flashlights and toilet paper. Another thing taken for granted is human companionship. We're so used to being surrounded by people day in and day out that we'd all have a rude awakening if we spent a few years on a deserted island alone.

Content of the film basically fell mainly under that violence/blood categories. Language is kept to a minimum with 2 "s" words and 1 "G-D**n." There's no sexual material and the only even slight nudity is that Chuck wheres a self-made loin cloth at times and you see most of his thigh and parts of his butt, but nothing ever explicit. 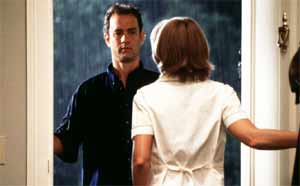 Some bloody intances occur. While Chuck is trying to escape the island on a raft, he falls off and cuts his leg really badly on some coral. It's relatively bloody, and the next day he wakes up and the wound is pretty bloody/gory, but it's seen in a dark setting. While trying to make fire, he cuts his hand pretty badly on a stick and his hand is pretty bloody. He gets a smear of blood on a volleyball (by accident) and later uses it make a face on it. Later we see he has a pretty infected tooth. When he tries to remove it, a tiny bit of blood comes out of his mouth (his attempt to remove may be unsettling to people - like me - who hate any kind of teeth problems). Also, when a dead body washes up on shore, we see the partially decomposed face under the water and a little bit when he finds it. It's wuite gross in appearance. And finally, we see a small trickle of blood on his hand which he uses to repaint the face on the volleyball.

I really liked this movie. Although it's not a film to watch over and over (yet I would like to see it again), it's a great story with great acting and I was really impressed. It isn't too often you see a movie this good. Another warning to some-- if you have a fear of flying or have had any bad experiences before, you may not want to see this film. The plane crash sequence is really intense and realistic.

In summary, I was really impressed by this movie. It was mainly PG-13 due to the blood and disturbing material (the dead body, the plane crash), but had very little if any of anything else really offensive in it. Due to its great story and amazing acting, I have no choice but to warrant the movie at least a 3.5 out of 4, but hold back the half a point for that before-mentioned content. With a little more polishing it could have probably been PG and would have probably snagged our 4 star rating. On that note,

Sex/Nudity: We see parts of Chuck's bare butt - mainly the side or his thighs, because of the homemade loin cloth he has to wear on the island.

Alcohol/Drugs: Some people drink wine or champagne in a couple scenes.

Blood/Gore: While the plane is losing control, a man hits his head inside the plane, leaving his head and shirt bloody. The water turns red from scrapes on the bottoms of Chuck's feet from walking on the rocks. A body from the plane crash washes up on shore and Chuck finds it. We briefly see that it has started to decompose and turn white from being in the water too long. We see its super pale skin a couple times before Chuck finishes burying it. When Chuck falls out of his raft after being hit by a wave, he slices his leg badly on the coral. We see the water turn red as he walks back to shore. Later, after the bleeding has stopped (the next morning), Chuck uncovers the wound and although the setting is dark, the wound pretty gory. While trying to start a fire, Churck nearly impales his hand with a stick, making it very bloody. Out of frustration, he grabs and throws the volleyball, leaving a bloody handprint on it (which he eventually uses to make a face on it) While examining his mouth, we see Chuck's sore tooth has become really infected. As Chuck tries to remove his infected tooth with an ice skate, we see a small amount of blood fly from his mouth along with the tooth (his attempting to remove it may be disturbing to watch for some). A trickle of blood runs down the top of Chuck's hand so he can use it to fix Wilson's face on the volleyball.