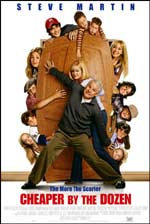 Cheaper By The Dozen

The Bakers live in a small Illinois town where Tom coaches the local college football team. The family's day-to-day life is marked by equal parts love and chaos - pet-frog-landing-in-the-breakfast eggs type of chaos. When Tom is offered his dream job, coaching a squad at a large university, he and Kate uproot the family, much to the displeasure of all 12 children. At the same time, Kate learns that her memoirs are about to be published. Her agent whisks her away to New York to promote the book, leaving Tom home alone to handle the increasingly unhappy and hectic household, as well as his demanding new job. With all heck breaking loose at home, Kate on the road, and Tom's job on the line, the Baker family ultimately chooses not to have it all, but to love what they do have.

A lot of family films get panned these days for rehashing classic story lines and moments or key plot elements we've seen reused more times in Hollywood. Cheaper By The Dozen is a remake of a 1950 film by the same name, but has little to nothing to do with the original. Instead, this remake focuses on the classic story of the neglect children feel when their parents get too busy, mixed with the comedic elements of one man (in this case Steve Martin) trying to juggle the responsibility of all of the children on his own. While viewers seem to be split between hating it and thoroughly enjoying it, I have to admit I'm among those who thoroughly enjoyed it.

While certain plot elements might feel a little forced at first -- for example, one of the children feels like an ugly duckling and is often mistreated; or the common kids-know-better-than-the-parents setup -- director Shawn Levy (Just Married / Big Fat Liar) and crew are able to make it a fun and emotional ride. When mayhem breaks loose and moods begin turning sour, the film loses much of the lighthearted charm it starts out with. However, when the movie begins to tug at your heartstrings, you're liable to let yourself be 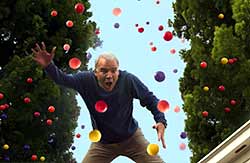 pulled in. While a much longer movie would be necessary to really get us appropriately acquainted with this family, Levy does a fine job painting an adequate picture of the family of fourteen.

The acting was good, with a more subdued Steve Martin helming the family and the ever talented, charming, and downright funny Bonnie Hunt turning in another great performance. The rising star Hilary Duff, famous for her involvement in Disney outtings, fit well as the bratty and shallow fashion-minded sixteen-year-old. Ashton Kutcher turned in what was probably the weakest performance. But his character pretty much required him to be a loser and a jerk and Kutcher played it well despite giving more of a cartoony over-the-top performance.

In the way of content, Levy keeps the film almost spotless. 1 minor swear word and another bleeped out during the film's closing outtakes round out the profanity while the only instance of blood is a minor scrape on a little girl's forehead. The only really unnecessary content is the fact that the oldest child in the Baker family has moved out and in with her boyfriend. While Tom and Kate stick to their convictions about her sleeping with her boyfriend in the house being wrong, it's never really made certain whether or not premarital relations were against their beliefs entirely. But it was nice to see Martin's character vehemently opposed to them staying together in the house. It's something Hollywood doesn't scold all too often. Finally, the strong family bond through the 14 family members was a delight to see. Although it does unravel at one point, it never breaks and only makes them stronger.

Despite having a few typical, seen-that-before, or frustrating moments, I really enjoyed watching Cheaper By The Dozen. The family was fun to watch and when things got serious, I found myself relating to and feeling sorry for the characters. It may seem too predictable of a film for some, but I thought its execution was well done. If you're looking for something new, you may want to look elsewhere, but if you're looking for a good clean family film this frigid Winter, I recommend checking out Cheaper By The Dozen.

Sex/Nudity: It is mentioned that her Nora's parents wouldn't let her sleep with her boyfriend, so she moved out with him. We see the two briefly passionately kiss. Later, it is implied that Nora and Hank either sleep together or fool around when she sneaks him into her parents' house and we see them wake up the following morning together.

Alcohol/Drugs: In an outtake, Bonnie Hunt makes a joke about Hilary Duff being drunk after she trips over herself.

Blood/Gore: One of the children have a small bloody mark on their forehead from where their sibling had hit them with a dart. One of the children throws up but we don't see the vomit. However, when another child slips on the vomit, we see a little bit on them and the floor before they vomit as well.

Violence: All comically-related violence. Some characters slip and fall on vomit/food/etc on the floor. A man falls off a ladder; is hit by a chandelier. A dog bites a man's pants and drags him around; etc. Disclaimer: All reviews are based solely on the opinions of the reviewer. Most reviews are rated on how the reviewer enjoyed the film overall, not exclusively on content. However, if the content really affects the reviewer's opinion and experience of the film, it will definitely affect the reviewer's overall rating.