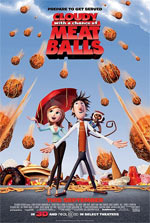 Cloudy With A Chance Of Meatballs

When hard times hit Swallow Falls, its townspeople can only afford to eat sardines. Flint Lockwood, a failed inventor, thinks he has the answer to the town's crisis. He builds a machine that converts water into food, and becomes a local hero when tasty treats fall from the sky like rain. But when the machine spins out of control and threatens to bury the whole world under giant mounds of food, Flint finds he may have bitten off more than he can chew. (from Fandango.com)

"Random" humor is an acquired taste. While I more often than not appreciate a good random and intentionally silly shot at humor, there are some who not only don't understand it or appreciate it, but in turn are almost offended by the very attempt at random and silly humor. One of my favorite animated movies of all-time was Disney's The Emperor's New Groove, released in 2000. Entirely random, while done in a classic hand-drawn animated style, the Disney feature felt more like a Warner Bros. Looney Tunes cartoon than something released by the famous family entertainment studio. Being a Sony Pictures animated flick (and based on a childrens book), Cloudy With A Chance Of Meatballs doesn't need to feel like a Disney film in any way, opting for more of the DreamWorks formula than anything. The end result is a gloriously random and awfully funny animated adventure.

Cloudy With A Chance Of Meatballs bears one of those unconventional titles that sums up the movie well despite at the same time threatening to just being a completely forgettable animated B-movie. Thankfully, Cloudy... is anything but, and feels like a quality venture from beginning to end. Sony's previous animated features, which started with 2006's Open Season, are decent outings, but lack a bit of the longetivity that the Disney (including Pixar) and DreamWorks efforts often offer. The voice cast of Cloudy... is also especially modest, which actually allows for the characters to not be overshadowed by the star power. Instead, sharp writing and unique, stylized animation allow for the film to succeed in the areas that count most.

SNL talent Bill Hader's voicing of Flint Lockwood is a solid effort and Anna Faris (of whom I'm not very fond of) does a fantastic job bringing enough spunk, charm, and irresistible nerdiness to her role of Weather News Network intern Sam Sparks. Flint and Sam have a great chemistry as well, and the film takes plenty of time to let their relationship develop naturally. The rest of the voice cast does a swell job as well, including James Caan as Flint's impossible to please father, Bruce Campbell as the town's twisted mayor, and the famous Mr. T as policeman Earl Devereaux. The story is pretty swift moving and original from start to finish, with very few moments that can be predicted. And just when you think you might know where the story's headed, there are a few surprises tossed in to keep it fun and fresh.

When it comes to content, the film earns its PG rating by being just a bit more abrasive than most animated family features. The town's mayor uses the phrase "H*ll hole," while Flint mutters a "cr*p" later on in the film. Aside from that, a couple of the gags can be a bit violent, with the most obvious one also being one of the film's funniest moments. When it comes to kids wanting to imitate something they see, it'll for sure be a moment where Sam explains what a snowball fight is to Flint, which inspires him to go on a rampage, smashing random people in the face with snowballs of ice cream in rough and violent ways. Most of his victims sit up and smile, but it's the kind of thing that wouldn't be smiled upon in a real life situation (especially by the parents of said kids who might imitate this action). Also, there's A LOT of food in this movie, and while it does eventually cast a shadow upon the idea that gorging yourself on any kind of food you want isn't healthy for you, the movie does make junk food and large quantities of food look like a blast. Definitely don't see this one on an empty stomach!

The film's greatest strength -- its randomness and originality -- may also be its biggest weakness. The film's finale is not only a series of some of the most random (albeit food-related) series of events, but it may be so unexpected for this story that it just feels maybe too preposterous (and for a movie like this one, that's saying a lot)? If anything, the ending takes a few too many cues from sci-fi disaster films (like Wars Of The Worlds or Independence Day), but it's all executed in a fairly unique way. It's the kind of premise that allows for the absurdity of it all to only seem expected and natural to the story, so in the end, you can't help but feel like it still works as a whole. I do have a feeling, however, that with repeat viewings, I'll be able to appreciate such an outcome, but upon first viewing, I was surprised by the sci-fi-ish direction they decided to take it.

Cloudy With A Chance Of Meatballs is an entertaining outing that thrives on originality and creativity to put together a truly enjoyable animated feature experience. Some viewers will have trouble getting past just how ridiculous and silly most of it really is, but there's something endearing about these characters... and some kind of guilty pleasure in seeing it rain down free food from the sky. If you're looking for a light comedy with lots of laughs and an exercising of the imagination, Cloudy With A Chance Of Meatballs serves up just the right forecast for fun. 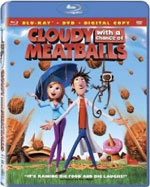 As you can imagine, the film looks gorgeous in Blu-ray. Cloudy With A Chance Of Meatballs is an exceptionally colorful film, and it feels made for this kind of home viewing format. For those who don't own a Blu-ray player but think they may take the plunge in the near future, the Blu-ray is packaged with a regular DVD as well, which features a full and widescreen version in addition to a downloadable copy of the film. It's a great bang-for-your-buck if you want don't want to double-dip in the future. If you have a Blu-ray player, this is the ideal package to grab. The digital copy is the only downer, however. While most other releases with a digital copy offer a Windows Media and iTunes friendly download, this digital copy is only workable with a Playstation 3 or PSP. If you have a PS3, you won't really need the downloadable copy unless you absolutely want to store this on the player (which just uses up hard drive space). Otherwise, it's really only a bonus if you're a PSP user as well.

The Cloudy With A Chance Of Meatballs Special Features include some pretty fun little additions. For starters, there's a "Splat-Mode" to enable when viewing the film. Basically, it's a pop-up feature that allows you to literally hurl a slice of pie, egg, meatball, or cream pie at the screen at the mere push of a button. While in the Splat-Mode, you can also squeegee the screen clean at a click, or turn it off entirely. I can't imagine it being something you'd want to keep on for the duration of the movie (and I'm sure it would get old quickly for anyone watching it while someone is playing with the feature). "Flint's Food Fight Game" is a pretty fun little game in the same vein as the classic arcade game Galaga, where you are a little ship firing forks at food spiraling around a giant meatball.

In addition to the games, there are several behind-the-scenes featurettes. The first, besides a feature commentary by the directors (and the voice of Flint, Bill Hader), is "A Recipe for Success: The Making of Cloudy With A Chance Of Meatballs." It's the perfect glance into what went into making the movie, including interviews with the voice actors, directors, producers, and animators. Details from colorization and set design to even planning out how the food might fall and land in a given scene are covered in this revealing featurette. The next featurette is "Key Ingredients: The Voices of Cloudy With A Chance Of Meatballs." Personally, when it comes to animated films I've enjoyed like this one, I'm often interested in learning more about the voice acting and even getting to see some footage from the recording sessions with the actors. "Key Ingredients" is a satisfying look into this, as Anna Faris, Hader, Andy Samberg, James Caan, Bruce Campbell, and even Mr. T and Al Roker all get to talk about their roles. It's definitely the highlight of the special features.

To round out the features, Two alternate/extended scenes are included, the best of which is the completed footage of a food fight between Flint and the Mayor. Two animated storyboard "Early Development" scenes are also included with audio to give a rough idea of some initial scene concepts. Another cool feature breaks down the lighting and visual effects of the film, giving art concepts versus final art scenes, and we see the layers of lighting used in several examples get peeled away to show how the scene was constructed. Miranda Cosgrove's "Raining Sunshine" video is also included. Surprisingly, it's the only feature that seems to not be in HD, and looks rather terrible compared to the rest of the HD features (the behind-the-scenes video doesn't look any better either). It's a rather corny video, but it's something younger viewers will probably enjoy most. Lastly, the "Make It Rain Food" spot is a brief commerical for feedingamerica.org urging viewers to join the the fight against hunger.

In the end, Sony does a great job wrapping up Cloudy With A Chance Of Meatballs for fans of the film to take home and enjoy time and time again. It's a fun animated film for the whole family and a great addition to your home video collection.

Sex/Nudity: We see the David sculpture and Venos Di Milo made entirely out of jello (but it's difficult to see any explicit detail); An overweight man rips his clothes off down to a diaper on more than one occasion

Violence: All comedic violence, but some is pretty edgy. One scene has Flint violently hitting people in the face and head with ice cream snowballs (causing them to just fall right over or get knocked off their feet); We see Brent running with a huge pair of scissors and he exclaims, "I probably shouldn't be running with these!!"; Large pieces of food come falling out of the sky at different parts in the movie and crash onto things or hit people, etc; Flint has some inventions that go haywire and explode or run away; Large roasted chickens swallow a person, but we find out they're okay; Some food come alive and start chasing an aircraft, while later other food start tearing up the wing. Steve then attacks and eats them; Other random comedic violence Disclaimer: All reviews are based solely on the opinions of the reviewer. Most reviews are rated on how the reviewer enjoyed the film overall, not exclusively on content. However, if the content really affects the reviewer's opinion and experience of the film, it will definitely affect the reviewer's overall rating.