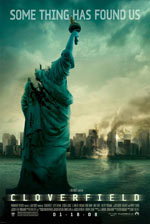 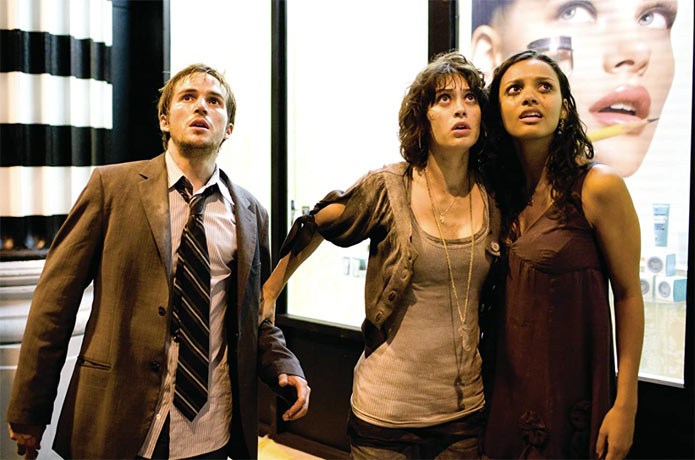 Five young New Yorkers throw their friend a going-away party the night that a monster the size of a skyscraper descends upon the city. Told from the point of view of their video camera, the film is a document of their attempt to survive the most surreal, horrifying event of their lives. (from MovieWeb.com)

Last year, while waiting for Transformers to begin, audiences were befuddled by an ambiguous trailer that was filmed completely by hand-held camera and seemed to allude to some kind of thing attacking New York City, with merely a date sprawled across the screen at its finish - 1-18-08. Audiences and movie geeks wondered what that meant - if the movie was called 1-18-08, if the "Bad Robot" production company title meant the movie was about a giant robot... the speculations seemed endless. Hype continued to build over this film that was getting more press for its producer J.J. Abrams than its director or any of its cast. All we knew was the guy who brought people the show Lost was about to bring something else entirely new to the big screen.

As a reviewer who has no interest in films like The Blair Witch or most graphic horror or terror flicks, Cloverfield is an especially unique experience. The film begins without credits, merely a few introductory splash screens as if we're watching a government classified tape, and then things jump right to the central character, Rob Hawkins, as he wakes up on April 27th (nice!) in his girlfriend's dad's apartment that overlooks the middle of NYC. From the beginning, we get glimpses into the lives of these thinly drawn characters, establishing a relationship between Rob and a longtime friend and love interest, Beth McIntyre, and the former's brother and closest friends. Before the sappy events of April 27th continue for too long, we find that Rob's brother and girlfriend are using the recorder to capture a surprise going away party for Rob... consequently taping over his time with Beth. What follows, inevitably, is an overlong sequence at Rob's party that is an attempt to flesh out the characters a bit before throwing them to the wolves (entirely a figure of speech). But before we're about to reach for a proverbial remote to fast forward this amusing New York edition of Beverly Hills 90210, the monster strikes and it's sheer pandemonium for the remainder of the film. 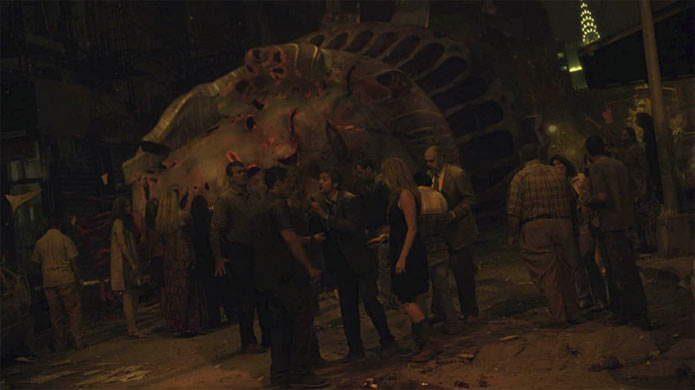 First of all, I need to address the MPAA's rating of the film. Considering the preview and any clip online featured a bevy of "Oh my G-d's" and related variations, I was pretty surprised language wasn't on the rating for this one. So, imagine this viewer's surprise to find the "s" word used nearly 50 times before the film's end, while variations of the Lord's name collectively approached close to a hundred uses. Granted, in a realistic disaster situation language like that would be expected and much, much worse (the language from our audience before and after the film was much, much worse), but the very least the ratings board could have done was tag this one appropriately. In addition to the "for violence, terror and disturbing images" rating, a mention of sensuality or something would also be appropriate given a brief shot of a girl's bare back laying in bed the morning after sleeping with the lead character, and then blatant references to this encounter as "sexual intercourse" made later on. It all was unnecessary for the film and to be honest, it was also rather unexpected.

Now the "violence, terror and disturbing images" were all earned quite well. At times, the film indeed pushed the rating envelope (with all content considered across the board, this was a hard PG-13 if not a light R), with graphic images of gory creature bites, characters flung into the air, blood splattering, and the worst probably being that of a gory hole/wound in a dead military man's body. The first-person viewpoint definitely makes the creepy and horrific moments more terrifying or unsettling, but it also makes certain moments - particularly action sequences - more difficult to focus on. It's a dramatically shaky-camera film that will make anything from Bourne Supremacy or Ultimatum seem smooth as silk. And with the right mixture of creepy or grotesque visuals with a shaky camera view, you're liable to end up with a nauseous stomach more than once if you're susceptible to motion sickness.

While the film uses the hand-held camera to pretty amazing results, you won't get the full effect that a sweeping, blockbuster monster film could bring. This isn't a Day After Tomorrow or Independence Day here. This is a completely new take on a monster or disaster film - one that brings things close to home, and for all those who enjoy a documentary or YouTube videos. It has an extremely amateurish feel in how the camera is handled, which gives it a bit more realism along the way. You really don't feel like you're watching a movie. It's the kind of movie that may have an even greater impact on your TV screen at home and not so much a big screen in a crowded theater. But if you're worried about whether or not the grand monster is shown, have no fear. We're given quick and partial glimpses for most of the film before more pay-off shots closer to the end. It's not a monster you've seen before, and it sure as heck isn't Godzilla. And - potential SPOILER here - this guy drops smaller spider-like creatures from its body that are freaky, creepy, and nothing you'd want to mess with.

If you're concerned about the lower budget this film was given, it's obvious they saved money on a smaller cast of unknowns (which gives it a much more realistic feel), and pumped their funds into the special effects - which are nearly fantastic for a non-blockbuster flick. The monster looks pretty intense and detailed and the devastated New York City visuals are nearly as impressive as the desolate ones in I Am Legend. It all adds up to be a pretty impressive effort.

With the passable acting, thinly written characters (but they really seemed like they did their best considering the limiting concept), and all the adult content included - that and not everyone's going to be able to sit through the shaky, hand-held camera work - Cloverfield is riddled with drawbacks and problems from beginning to end. It's not quite your typical Hollywood film, which may explain its faithless release in January instead of the summer, but Cloverfield remains entertaining and unique as a monster movie. Never does the flick ever feel predictable or overdone. Director Matt Reeves, Abrams, and all involved did a pretty bang-up job loading Cloverfield with surprises. There are times the audience will literally feel they're being taken for a ride.

To sum-up, Cloverfield isn't your usual Hollywood disaster or monster movie. Serving as more of a documentary of what could happen in the lives of a group of young twenty-somethings should a monster attack a big city, Cloverfield is unique but an acquired taste. The entire film is presented as a hand-held recording, which brings with it limitations but excitement as well. Sadly, some near constant over-the-top language (within the PG-13 rating restrictions, of course) and adult situations, as well as some extremely violent and disturbing moments make it impossible to recommend a film like this. It's definitely a ride you'll want to proceed to with caution.

Sex/Nudity: The film opens in a bedroom where we see Beth lying in bed, showing her bare back and most of one of her legs and thigh. Rob then turns the camera on himself and we see he's only in his boxers; Later, at a party, Lily tells Hud and Jason that Beth and Rob had slept together, so we then see Hud telling various people at the party that Rob and Beth "had sex together," and "had sexual intercourse" several times; When Beth leaves, she tells Rob to have a good night, to which Rob calls out to Beth's date to have a good night (meaning Beth would sleep with her date)

Blood/Gore: We see bloody cuts and marks on people throughout the film; A man that runs up to the camera has blood on his head; We see a character with blood on his face while another has blood on his sleeve and another has a gory bite mark on their shoulder and across the back with lots of blood. We see that character dabbing the wound with napkins (and they have blood on their hand); In a medical area we see quick glimpses of people being treated and a military body is carried past the camera on a stretcher who is dead with a large gory hole/wound in the chest/stomach region; Soon we see a character's face look pretty ill as they begin tearing blood and they're carried off to a place behind a curtain where suddenly a huge splatter of blood sprays on the translucent curtain; We see a character with what looks like a small metallic pole impaling their shoulder (their shirt is bloody); A fallen pilot has blood on their head and face; A man has bloody marks and cuts on his head and face

Violence: (POSSIBLE SPOILER ALERT!) We se a big explosion which sends the statue of liberty's head into the streets with people screaming and running; we see buildings damaged, collapsing, or on fire; a bridge collapses, killing a great deal of people; a series of creatures attack some people, biting one severely; a person apparently explodes, with blood splattering onto a curtain; Military vehicles and men attack the monster; we see an aircraft crash; a person is bitten, brought into the air and dropped; there are several explosions, etc... Disclaimer: All reviews are based solely on the opinions of the reviewer. Most reviews are rated on how the reviewer enjoyed the film overall, not exclusively on content. However, if the content really affects the reviewer's opinion and experience of the film, it will definitely affect the reviewer's overall rating.