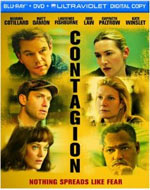 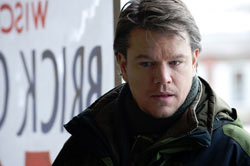 Contagion follows the rapid progress of a lethal airborne virus that kills within days. As the fast-moving epidemic grows, the worldwide medical community races to find a cure and control the panic that spreads faster than the virus itself. At the same time, ordinary people struggle to survive in a society coming apart... (from MovieWeb.com)

The last time I had seen anything from director Steven Soderbergh, it was when he had completed his Ocean's trilogy several years ago. Since then, the director has laid low a bit, helming mostly indie films, as well as another Matt Damon-starrer, The Informant!. But the director returns in a big way with another ensemble production, and his first IMAX film, Contagion. While the Ocean's films were on a grand scale when it came to the cast, comedy, and story, Contagion is entirely different territory. Basing the story around a global reaction to a sudden viral outbreak that quickly, and brutally takes lives, Soderbergh delivers a talented and versatile cast with an intense drama that calls for convincing acting. 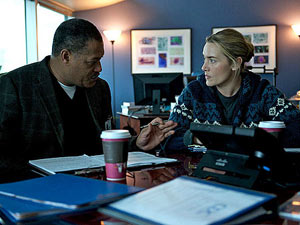 While trailers made Contagion out to be more of an exciting thriller, the truth about the film is that it is a drama first and foremost. The film, sort of like the director's Academy Award-winning Traffic, uses multiple characters and storylines to tell its story. Contagion is certainly further-reaching, however, as it takes the viewer from Chicago to Japan and beyond. The story ends up being just as much about the corruption of pharmaceutical companies and large corporations as it is about the human reaction to such a terrifying event. With such a big cast, it's tough to pinpoint a lead character for Contagion, as the story tends to jump around quite a bit. Matt Damon feels underused as Mitch Emhoff, while Gwyneth Paltrow plays his wife Beth and doesn't make it past the first few minutes of the film (which even the film's trailers reveal). Kate Winslet is good but also somewhat underused, while most of the screen time seems to go to Laurence Fishburne who plays Dr. Ellis Cheever, a higher-up at a pharmaceutical company. Jude Law fills the shoes of a blogger who represents the voice of the Internet community, and provides his own kind of "viral" influence. Soderbergh weaves an intricate plot of lies, deception, and even panic, and it's interesting to see the different viewpoints and how difficult it is to find the truth through the mayhem. By the time the film's hour-and-forty-six minute running time is up, some plot elements will feel sorely unresolved, which will surely frustrate more than just a few viewers. While he does explain how this virus originated--and in a rather ironic way--he doesn't, unfortunately, explain what will become of all of the film's main characters. Given the under-two-hour running time, it does feel as if Soderbergh could have continued the film a little longer to finish tying up any loose ends. 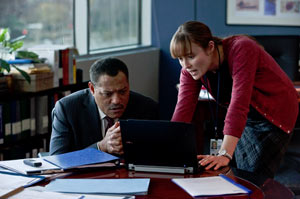 Contagion surely isn't a film for everyone; just the concept of a global virus that quickly ravages the general population, decimating families and cities is a pretty unnerving idea. Sadly, it's a realistic possibility, and that makes the film a creepy and intense venture right out of the gate. It's an emotional journey which almost doesn't work at times because we're not given all that much time with a lot of the characters. For example, we can feel for Damon's now-single father, Mitch, as he has to try his best to protect his teenage daughter from ending up like his wife, Beth, but we don't quite spend enough time with him to really get too deeply invested in his life. What Soderbergh does do well, however, is play up the fear and paranoia. Mitch witnesses his neighbor's house being robbed in the middle of the night, with only gunshots being heard before a pair of masked characters run out. A call to the police ends up being fruitless as the force (what's left of them, at least) have their hands full with widespread riots and looting. It's unnerving to even think about such a situation, and that's something that Contagion has going for it.

With that said, the content for the film is intense at times, but ultimately not nearly as bad as one might expect from a film with a high body count and emotional tensions. We see quite a few deaths in the first half of Contagion, all with the victims' frozen with eyes wide open and varying amounts of foaming or dried discharge around their mouths. It's the kind of sight that could haunt the more sensitive movie watchers. There is one unnecessarily graphic scene that involves an autopsy when a person's scalp is cut back and flopped over their face (complete with the sound of a buzz saw in the background). There's also one "F" word from a miscellaneous bystander in a drug store telling a woman to "bleep-off." It felt rather out of place and included just for the sake of including one under the PG-13 banner. There is some other profanity in the film, including some blasphemy, but it's surprisingly not as much as you might expect from such a dramatic story.

Aside from some semi-unresolved character stories, the biggest problem I had with the film was how several characters who worked in such organizations as the Center for Disease Control (CDC) didn't seem to find it important to wear any kind of masks or hazmat suits to keep them from catching the disease. So when they inevitably did catch it, it makes you wonder how they could have been so careless, especially given their occupation. In the end, you have to wonder if their lack of viral protection was most likely because it would otherwise cover-up the actors' faces, making it impossible to see the stars in the film (in fact, in most cases, it's the main stars who are seen most with nothing obstructing our view of their faces). Also, the film's score was pretty good for the movie, but may actually have been a little too "cool" for a drama about a virus. At times, its electronic styling sounds more like it was lifted from a sci-fi film like Tron: Legacy than anything else. It was a little distracting, but at least one can say it was not because it was a terrible score, just possibly mismatched for the mood.

In the end, Contagion is a good drama, but perhaps it isn't as realized as well as it could have been. The acting is top-notch and Steven Soderbergh's directing is skillful, but the fact that parts of the plot feel unresolved make the film seem a bit incomplete. By the time the credits roll, you may get the distinct feeling that the filmmakers just weren't all that confident as to what the best way to end the film may be. You certainly could catch worse than Contagion, but you'll most likely get the feeling that it ultimately could have been a whole lot more. 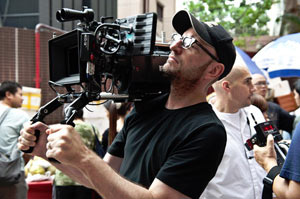 Contagion arrives on DVD, single-disc Blu-Ray and a Blu-Ray/DVD/UltraViolet Digital Copy combo pack (as well as digital movie providers) from Warner Bros. In HD, the film looks fantastic with Soderbergh's unique stylized filmmaking and its crisp presentation. While a movie like this--a drama that doesn't rely really heavily on visuals--probably doesn't beg to be seen in HD, but Warner has done a great job giving this film a solid presentation.

The Reality of Contagion (11:29) addresses the harsh reality of such a possible pandemic where something like this could eventually happen in the real world. The cast and crew talk about the film, what it was like to work on the set, and working with experts to make the film as realistic as possible. The featurette ends with thoughts on how information and panic can spread just as fast and as dangerously as the virus itself (like misinformation on the Internet and such).

The Contagion Detectives (4:57) is a featurette dedicated to the real scientists who inspired the ones seen in the feature film; it spotlights these people and their professions as medical heroes. Kate Winslet and Jude Law are among the cast who share the most about their respective roles in the film.

Contagion: How A Virus Changes the World (2:01) is a dizzying, hyperactive cartoon that illustrates--quite candidly--how a virus spreads. It's meant to be lighthearted and entertaining (and probably geared mostly toward viewers with ADD), but a little nonsensical to include here. (And sadly, it horribly dates itself by likening a virus to "Bieber Fever, but worse," but then makes a nice and appropriate dig at how pop artists in the music world often unite to record songs to raise support in the wake of disaster.)

The special features for Contagion are quite thin, so if you loved the movie and look forward to going behind the scenes extensively, this isn't the release for that. Oddly enough, while the film's writer, producer and most of the chief cast can be heard talking in the special features, there's a distinct absence of director Steven Soderbergh pitching in his two cents.

Sex/Nudity: Beth answers her cell and the man on the other end playfully says his name is Jon and that the two of them had just had sex in a hotel (but she's married to someone else); Alan makes a remark about pharmaceuticals getting a "hard-on" (meaning they'd love the opportunity to capitalize on selling a vaccine); Two teens are about to kiss, but the girl's Dad pulls the boy away; We see part of a woman's bare thigh as she injects a vaccine into her leg.

Alcohol/Drugs: A doctor asks a patient and her husband if she has done drugs; We see various flashbacks of Beth in a casino drinking; There are some other various shots of people having drinks, but nothing significant

Blood/Gore: We see the discolored legs of a virus victim lying on her bathroom floor with some foam in her mouth; We see some quick shots of butchers at a meat market in China; We see a dead little boy with his eyes open in bed with some dried discharge around his discolored lips; We see a dead woman on a bus with her eyes open and dried discharge around her discolored lips; The grossest part in the film shows Beth lying eyes-wide-open on an autopsy table and we hear a saw as they cut her scalp and peel it back on top of her face. The docs then examine her brain (which we don't see) and the scene ends there; We briefly see a butcher with a dead pig and he wipes a little bit of blood on his apron