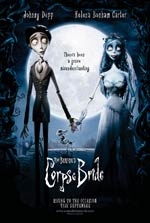 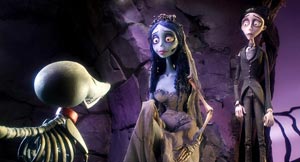 Corpse Bride carries on in the dark, romantic tradition of Tim Burton's classic films Edward Scissorhands and The Nightmare Before Christmas. Set in a 19th century European village, this stop-motion, animated feature follows the story of Victor (Johnny Depp), a young man who is whisked away to the underworld and wed to a mysterious Corpse Bride (Helena Bonham-Carter), while his real bride, Victoria (Emily Watson), waits bereft in the land of the living. Though life in the Land of the Dead proves to be a lot more colorful than his strict Victorian upbringing, Victor learns that there is nothing in this world, or the next, that can keep him away from his one true love. It's a tale of optimism, romance and a very lively afterlife, told in classic Tim Burton style. (from MovieWeb.com)

Tim Burton has made a name for himself in delivering some of the more bizarre and often dark films to family audiences. Adding to his recent string of quality films like Big Fish and Charlie And The Chocolate Factory, Burton revisits the art of stop-motion animation with Corpse Bride. Teaming up once again with Johnny Depp (who was also in Burton's Charlie... and Edward Scissor Hands), Burton delivers a delightful story with amazing, how'd-they-do-that visuals to make for a charming story. But the thing that may hurt Corpse Bride quite substantially is just how unbelievably dark it really is.

I have to admit that I still haven't seen Burton's previous animated film The Nightmare Before Christmas, so I can't quite compare this to his earlier effort, however, I'm familiar with this style of animation and it's always intriguing to behold. Corpse Bride isn't any different. But its morbidity is where it suffers some. The film doesn't have a bright scene in the mix and while that's basically typical Burton, it really drags this film down in mood. However, it can be said in defense quite easily that this is hardly the film for a bright sequence, but it just seems heavy-handed for a family film. 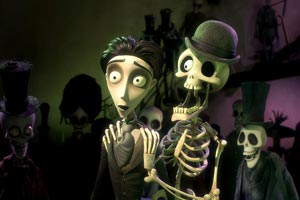 That aside, it's important to note just how clever this film's technique and story really is. Depp is perfect as the bewildered lead, while Burton's staple actress Helena Bonham Carter does an incredible job breathing life into the title character.

Because of the morbid nature of the film, the content feels like a tour through a haunted house with a hearty helping of skeletons, severed heads, and dead spirits. This includes a talking severed head that shows insects crawling from its neck and a dead man who literally splits in half several times, revealing all of his organs inside. The Corpse Bride herself loses her skeletal limbs several times, along with her eye often popping out to reveal a maggot (which is wonderfully portrayed to look and sound just like classic horror film actor Peter Laurie). The humor of the film and charm of many of the characters helps ease some of the more intensely dismal scenes, but this is more than likely a film you'll want to keep the little ones home from - especially those who are sensitive to skeletons and corpses. Also, the film wasn't really as funny as it might think it is. With animated films in this style like Chicken Run, or the CGI Pixar films of the genre, the bar has been raised so considerably that films that seem to dazzle more than entertain just don't seem as memorable. But could the film's gloomy atmosphere rob itself of further potential for humor? It's possible.

The spiritual nature of the film is mostly that of a fairy tale than that of either Christian or occultic. Christopher Lee plays the somewhat creepy town minister who often, surprisingly, provides comic relief. There's also a skeleton who the Corpse Bride goes to see to help her return from the dead by way of a magical potion, but this isn't the kind of film that dwells on the mystical aspect of the story so much. The redeeming qualities of the film and its story is its theme of love. Its resolution is positive also in a good versus evil element.

Tim Burton's Corpse Bride isn't particularly the fluffy cotton candy that similar films like Chicken Run were, but it's an enjoyable story, albeit too dark. Leave the little ones home for this one and feel free to enjoy this well-crafted animated film.

Alcohol/Drugs: The dead drink in a bar. We see characters drinking during the film.

Blood/Gore: The Corpse Bride herself has part of her cheek missing which reveals bone beneath. One each of her arms and legs is completely skeletal while the others are covered with flesh. She has a hole in her dress on her side, which exposes part of her ribs. Her skeletal limbs come off a couple times, for which she just reattaches, and her eye pops out occasionally; We see various skeletons and walking dead that show varying degrees of gross qualities. One skeleton has a sword sticking from it, another splits in half a couple times, revealing its organs inside, another is merely a severed head and we see insects crawling from its neck; A dead man's head falls off onto the ground; We see a dead cook with creepy looking eyes, with one dangling by its nerve

Violence: Mostly comical violence, but all of the characters in the Land of the Dead are skeletons or walking corpses. Some are partially decomposed; We see a skeleton with a sword through its chest; a character dies by coughing, falling off a wagon and being run over by a carriage. We then see that person dead in the Land of the Dead; A character tries killing another with a knife and later dies by accidentally drinking a goblet of poison Disclaimer: All reviews are based solely on the opinions of the reviewer. Most reviews are rated on how the reviewer enjoyed the film overall, not exclusively on content. However, if the content really affects the reviewer's opinion and experience of the film, it will definitely affect the reviewer's overall rating.