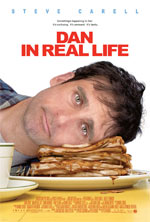 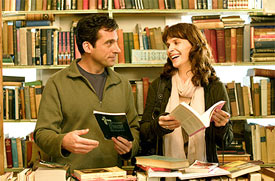 Advice columnist Dan Burns is an expert on relationships, but somehow struggles to succeed as a brother, a son and a single parent in this heartfelt comedy from director Peter Hedges. (from MovieWeb.com)

It's always exciting to see the versatility of an actor known for doing primarily comedy. Movies like The Majestic and The Truman Show were Jim Carrey's first real chances to burst out of the comedic box, although none of his dramatic roles have proven to be very popular. Dan In Real Life is a step in a different direction for budding comedic actor Steve Carell. Carell has shot to stardom after appearing in a small role in Anchorman, then starring in The 40 Year-Old Virgin, and now leading the successful TV series, The Office. To see him downplay his goofier side for the more dramatic and ultimately realistic Dan Burns in Dan In Real Life, is a genuine treat.

Although Carell, like Carrey, has a face for comedy, life happens and Carell knows how to channel true emotions into a tangible, relatable performance. Dan Burns is a widower and father of three young girls all going through different stages in their lives. As a successful advice columnist, Burns is better at giving advice than taking it. When he whisks the family off for a family trip to Rhode Island, he gets a whole lot more than he bargained for. With all of his family around him growing and having seemingly "complete" family structures, Dan feels like the odd-man-out. Some unpopular disciplining of his daughters leaves him feeling even more isolated and a trip into town one morning finds him meeting a foreign woman named Marie. Their introduction at a book store leads to a chat over tea where Dan and Marie share intimate conversation, but before they could finish their discussions, she runs off to meet up with a previous engagement. When Dan returns back to the family cabin and shares of his exciting encounter, he's horrified to discover Marie is really his brother Mitch's new girlfriend and it becomes near torture for him to see them together. 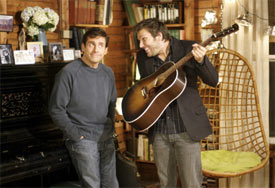 Dan In Real Life works wonderfully as a more subtle romantic comedy, choosing an autumn setting and a minimalistic folk/acoustic soundtrack to give off a distinct indie film feel. Carell is given moments to shine in the funny and in the serious, but he plays much more of a tortured soul here. There's a frustrating tone to watching him have to endure his family fawning all over Marie and his brother's ability to win the heart of a woman like her. Steve is very believable as a widower with a trio of young daughters struggling to make it as a writer and a single parent at the same time. A lot of the way the characters act and react are rather plausible - from the quirkiness of his family - who often are concerned for his well-being while allowing him to still experience plenty of solitary and short-end-of-the-stick moments - to his parental duties. It's the realism and the humor found in real life situations that make the film more moving than your usual romantic outing. The heart takes a harder hit to see Dan struggle with feelings and situations many of us have experienced - even if not quite so directly.

The content for Dan In Real Life is remarkably tame. All of the film's language - which isn't much at all - happens in one pivotal scene, which is still limited to one "S.O.B," a pair of "h*ll's," and a pair of "Oh my G-d's." The only other content to be concerned about, however, is some mild innuendo here and there. There is also one moment of brief partial nudity that I was surprised was not made part of the MPAA's rating of the movie (which is PG-13 solely for "some innuendo"). Dan hides in Marie's shower when one of his daughters walks in the room, and the water is turned on with him secretly standing in the tub (to only Marie's knowledge). The daughter encourages Marie to take a shower despite her presence, and Marie proceeds to disrobe and climb in the shower with Dan. In the process, we see what Dan sees - a partial view of Marie's bare back and a brief glimpse of the back/side of her breast in the reflection of a mirror. Aside from this, there are no instances of sexuality or implied sexuality, and no real explicit nudity.

Dan In Real Life is not a film for everyone. Its slower, subdued and often more serious nature will make it tougher for teens (and younger) to relate to or find enjoyment in. While there are plenty of funny moments, it's not a laugh fest by any means, so don't go to Dan In Real Life expecting The 40 Year-Old Virgin Steve Carell or even Evan Almighty Steve. There may be a moment or two when viewers might think of Carell's Michael Scott from The Office, but Dan Burns is a much more down-to-earth man who is merely a victim of circumstance, himself, and real life. Dan In Real Life was one of the better acting vehicles I've seen in 2007 and one of the most emotional ones (keep a tissue on hand). It's a joy to see a film about family and life's ups and downs that has a smart blend of emotion, comedy, creative license... and a touch of real life.

Sex/Nudity: Dan finds a g-string panty in the laundry and finds out it's his middle teenage daughter Cara's, who he then sees wearing sweatpants that say "You Wish" across the rear; We see Mitch and Marie doing stretches out on the lawn that look a little sensual, making Dan uncomfortable; While in her bathroom talking to her, Dan hides in Marie's shower when his daughter Jane walks in to talk to Marie. They turn on the shower while he's fully clothed in there and Jane, not knowing her dad is in there, encourages Marie to disrobe and take a shower although she's there. Dan can see the partial reflection of Marie undressing as she pulls her top off and we see her bare back with a partial back/side view of one of her breasts very briefly. She then gets in the shower, covering her chest as she faces Dan, who embarrassingly just stares at her face. He then takes a washcloth and puts it over his eyes so he can't see her. We then see him crawl out the window minutes later; Some of Dan's family want to address how he's been acting strangely over the weekend, and his cousin comments that Dan is "all backed up" and needs to show himself a bit of "self-love" (a reference to masturbation) to help himself out (Dan obviously dismisses this). After a blind date, Dan's cousin asks him if he was unplugged at all (nothing happened on the date); When Dan confronts Cara about her dating at a young age, she tells him that her boyfriend plans to "wait in regards to sex" and Dan asks her if that's supposed to make him feel better; Ruth wears a sexy dress and dances a little seductively in a bar

Alcohol/Drugs: Some characters drink casually in a bar

Violence: Mostly comedic; A man is hit in the face with a football, A man punches another in the face, a car backs into another by accident Disclaimer: All reviews are based solely on the opinions of the reviewer. Most reviews are rated on how the reviewer enjoyed the film overall, not exclusively on content. However, if the content really affects the reviewer's opinion and experience of the film, it will definitely affect the reviewer's overall rating.