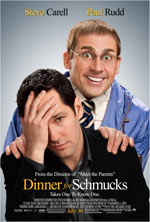 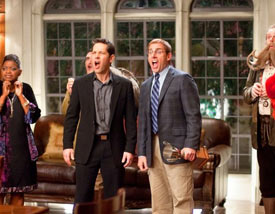 Dinner for Schmucks tells the story of Tim (Paul Rudd), a guy on the verge of having it all. The only thing standing between him and total career success is finding the perfect guest to bring to his boss' annual Dinner for Extraordinary People, an event where the winner of the evening brings the most eccentric character as his guest. Enter Barry (Steve Carell), a guy with a passion for dressing mice up in tiny outfits to recreate great works of art. From Jay Roach, director of Meet the Parents comes an unforgettable feast about two unlikely friends and one very memorable dinner. (from MovieWeb.com)

It's been several years since director Jay Roach -- the guy responsible for both the Austin Powers and Meet The Parents trilogies -- has made a feature film and 2010 sees his return to the big screen with the third Meet The Parents film and an entirely new subject matter in Dinner For Schmucks. Roach's latest comedic vehicle is nearly as crass and crude as all of his previous projects, mixing genuine laughs with crossed-the-line sexual humor. It tries for a childish approach to seem innocent but it is clearly used for shock value and cheap laughs. It's unfortunate, too, because thanks to the comedic chops of Steve Carell, Dinner For Schmucks still has some truly funny moments. 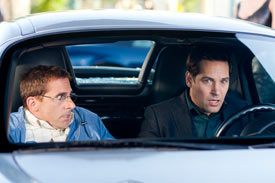 Like with the Meet The Parents series, Roach will unload the comedy (and attempts at comedy) and lay on the silly stuff real thick as a build up to an effort at substance and heart before the story's end. Dinner For Schmucks does this too, trying to redeem its mean spirited nature of picking on outlandish characters for the amusement of others. But Roach makes sure that the film's lead, Tim - played by Paul Rudd, doesn't quite feel right about the idea. It wouldn't be too easy to relate to the film's central character if he was a completely heartless jerk, and that is what makes Rudd's character easier to support as his world comes crashing down after meeting Barry. But the scene stealer is Steve Carell with his completely well-intentioned buffoonery. Carell is no stranger to such a role, really - as he plays Michael Scott on TV's The Office, but Barry is in a league of his own, and Carell's reddish brown hair, glasses, and (appropriately) mousey teeth help separate him from his television counterpart. Barry is completely clueless and exaggeratedly dense, which is his greatest fault and handicap, but it makes his character endearing at the same time. Still, Roach takes this innocence that Barry has and uses it to reveal an immaturity and inexperience that leads to some awkward sexual humor.

Tim's girlfriend Julie works in an art gallery and one of her artist clients is an eccentric animal lover named Kieran, who openly talks about sex... and helping a zebra give birth by reaching into the animal and pulling the baby out. The latter is just one of the examples of the film's outrageous humor, but the former peaks when Barry and Tim stumble on Kieran completely naked except for a small piece of fur covering his crotch and butt crack, while he's with two naked women who are painted like animals and have what looks like small patches of whipped cream over their nipples and crotch area. They paw at each other like it's some national geographic special and he even invites Tim and Barry to join him (but obviously they don't). It's moments like those that push the rating system more than a little bit. When it comes to language, there's one obvious "F" word (said by Ron Livingston at the dinner), while Rudd also teases his girlfriend's mispronunciation of things and says "fooked" in place of another "F" word. There are also a handful of other colorful words and phrases, and literally about 30 uses of "G-d" (mostly "Oh my G-d"). Sexual encounters are talked about and even described a little bit - especially involving a girl who's completely obsessed with Tim who he had a drunk one night stand with years earlier which comes up in conversation, and the subject of a man who's having an affair with another man's wife comes up several times. Lastly, there's a little comedic violence, but also an instance where a man's finger is accidentally sliced off and we see it fly through the air. We then see it with a small pool of blood on the ground and then watch it get carried off by a bird. It's played for laughs, but still kind of gross. 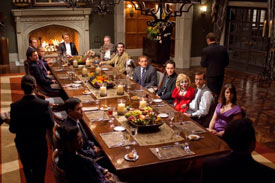 Aside from the content, other problems with the film stem mostly from the movie being about twenty minutes too long. Most comedies don't extend past an hour and a half and Dinner For Schmucks reaches almost two hours in length. Because of this, several sequences seem to drag on just a bit and you start to wonder if a movie called Dinner For Schmucks would ever actually get to any kind of supposed dinner at all. The dinner isn't until the film's finale and it's almost laborious getting to it (and the trailers primarily showed scenes from it). Also, while Steve Carell seems to be at his comic best here, Paul Rudd almost doesn't cut it as the film's straight man. While he certainly isn't bad in Dinner For Schmucks, I'm just not sure he's leading man material. And although he's more of a Bud Abbott kind of character here to Carell's Lou Costello goofy companion, Rudd may just be slightly too dry to carry the film as the central character. Lastly, some may be offended by the fact that Barry recreated the Last Supper in a mouse diorama. While he seemed to mean no disrespect, it's used as a gag in the movie, and recycled for a later gag when Julie finds the mouse dressed as Jesus in Tim's pocket while they're fooling around.

It's unfortunate that Dinner For Schmucks favors the crude and crass over straight-up screwball laughs or physical humor. Carell really is at the top of his game as a witless doofus and he's a joy to watch here. He's responsible for some real genuine laughs during the movie. However, for every clean gag or innocent laugh there seem to be twice as many sexual references and jokes. It's way too much and because of it, I wouldn't recommend this one. Adult humor abounds in Dinner For Schmucks and it's one that moviegoers are better off passing by this Summer. You're much better off seeing Carell's other leading film, although animated, Despicable Me. Ironically, it's actually considerably less despicable. (Note: To those who do see the movie, there is a little, tiny, almost insignificant additional scene after the credits, so for anyone interested, you may want to wait them out).

Alcohol/Drugs: We see some drinking at parties, but nothing significant; Barry misinterprets Kieran's message about horses and grass as being something about drugs, including heroin (played for laughs as it has absolutely nothing to do with it)

Blood/Gore: A swordsman accidentally slices off a man's finger and we see it go flying through the air and land across the room. We then see a closeup of the finger on the ground and see some blood around it. We briefly see the man who lost the finger holding a bloody napkin on his hand, and then we see a bird fetch the finger and fly away; The mice in Barry's dioramas are dead. And although they're dead, they never seem gross or gory (if anything, they don't look real). But one is made to look like Vincent Van Goh and has a bandage around its head with a missing ear.

Violence: All comedic violence. Tim hits Barry with his car by accident, but Barry gets up and is just fine; Tim throws his back out and Barry climbs on top of him to try to crack it back into place; A woman throws bottles of wine at Barry and one crashes a glass shelf and another shatters on a door; A crazy woman smashes up a car with a metal post and then drives the sharp end of it through a car roof; A man waves a sword around at a party and accidentally cuts off a man's finger. Some other characters fence with him. A vase is then thrown through a window Disclaimer: All reviews are based solely on the opinions of the reviewer. Most reviews are rated on how the reviewer enjoyed the film overall, not exclusively on content. However, if the content really affects the reviewer's opinion and experience of the film, it will definitely affect the reviewer's overall rating.