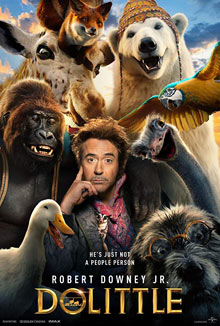 A recluse physician who is known for being able to talk to animals is pulled out of self-exile to go on a journey to find a legendary herb that might help save England's dying queen. 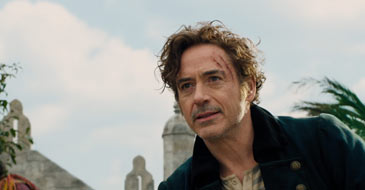 As a veteran movie watcher, I tend to be able to find merit in films that even the majority of movie-goers might not. (In other words, it might not be a great movie, but for one reason or another, I still thought it was watchable.) However, I had this capability massively tested when I optimistically, albeit cautiously, sat down to watch Universal's much-delayed and critically maligned Dolittle. 2008's Iron Man made me a fan of Robert Downey, Jr. (when, previously, 1998's U.S. Marshals hadn't helped much), and I have enjoyed greatly watching him in the MCU films, as well as his turn as Sherlock Holmes. Although the previews for this film, especially with the heavily CG-animated animals, made me less than excited for seeing Downey as Dolittle, his presence alone made me interested in it (as well as the ongoing challenge to be able to find new theatrical fare I can take my easily-scared 9-year-old son to). Sadly, no one could have saved this sinking ship.

A little digging online on the history of this iteration of Dolittle (or The Voyage of Doctor Dolitte, as it was once titled) will reveal that the movie has sustained some significant production issues. For starters, it was had begun production in early 2018, originally slated for a spring 2019 release, but was delayed for reshoots in order to mold it into more of a sillier, "family-friendly" film. Now, I'm all for family-friendly, but I suppose everyone's definition of what that means is different. Studios like Pixar and DreamWorks have continued to prove, time and time again, that it's possible to make really strong animated films for audiences of all ages to enjoy -- be it Toy Story or How to Train Your Dragon, for example. The story, the music, the acting, the characters -- none of it has to be dumbed down to make the material work for a wider audience. Unfortunately, the stuffy marionettes behind Dolittle have clearly learned nothing. Everything about this film is puzzling. It's easy to wonder what about it would even interest Downey to sign on, but chances are it was a much different movie on paper originally.

In most cases like these, one can credit at least the film's star for turning in a memorable performance. Here, however, it may be that he's memorable more so in a bad way than a good one. Downey's performance is over-the-top in many ways -- from his embarrassing appearance at times, to his exaggerated reactions and even the way he speaks. A lot of this can describe his Sherlock Holmes performance, but for those movies it largely worked. Plus, the material was just a lot funnier. Nearly every single joke falls flat here -- from the animal gags to Downey's performance -- making it a chore to watch. (I never walk out on movies, but I seriously felt like I was just wasting my time watching something I wasn't enjoying, and I talked myself into staying merely to see if it might get any better, and so I could write this review.) Downey's British accent in the Sherlock films mostly works, but here it seems like a strange mix of British and Irish, and worse yet, he almost always sounds overdubbed (which was really distracting). The plot is silly and doesn't really make much sense, and there really isn't one aspect of the film that stands out as warranting a watch--even if you're a rabid fan of any of the cast. Even the bleak subplot of Dolittle's wife having died before the start of the film, and him (and his wife's father) having to deal with the grief from the loss doesn't give any real weight or depth to the story... and it really should have. I can't say Downey doesn't try, either. 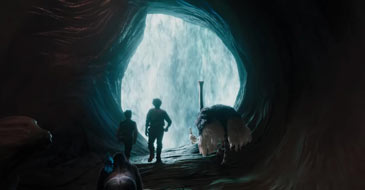 Another detractor is the unrelenting reliance on CG characters and environments for making this movie come together. I don't think a single real animal makes it on screen, and it feels like most of the setting the human characters are in--save for maybe the occasional room--are all green screen backdrops. For some bizarre reason, Dolittle is at times even seen holding things that are entirely computer generated -- even bagpipes (as if REAL or PROP bagpipes couldn't have been obtained for filming?!). It all accumulates to a film that just feels fake, haphazardly fabricated, and soulless.

The content is still pretty mild for PG, with most of the humor being slapstick and silly. The themes of Dolittle losing his wife, and mourning the loss, as well as the villain slowly poisoning the Queen, are a little on the darker, heavier side, but the goofier tone of the film aims to alleviate that. There are some mild uses of God's name as exclamations, but at times it was hard to tell if it was "gosh" or "God" due to all of the commotion in the film. There also may be one incomplete or muffled use of the "S" word, and what sounded like one use of "d*mn." Otherwise, unfunny fart jokes are about the worst of the inappropriate comedy, and for violence, a dragon roasts a couple characters off screen. Lastly, the only real bloody content is when we see some scrapes on Dolitte's forehead and hand after his encounter with a tiger.

Dolittle is a casualty of Hollywood trying to fix something that may not have needed so much meddling with. While I have no real desire to ever see this film again, I'd be curious to see what director Stephen Gaghan's original vision for the film was, before it was dumbed down in the name of expanding its audience. However, we may never know, leaving Downey and all those who contributed to this mess with the blemish otherwise known as Dolittle on their respective filmographies.

Sex/Nudity: There might be some subtle jokes, but nothing significant.

Blood/Gore: Dolittle performs an operation on a squirrel that was shot, but it's not graphic; Later in the film, Dolittle has a couple bloody scrapes on his forehead and some scrapes on his hands.

Violence: Mostly slapstick violence, but we learn that the Queen is sick and is being poisoned slowly by the villain; We see a squirrel that's been shot lying on the ground; A boy rushes the squirrel to Dolittle and asks him to perform surgery on it. We then see the animal prepped for surgery; a lion threatens to kill and eat Dolittle, and manages to scrape him a couple times; A ship is bombarded with cannon fire and sunk; A man threatens to kill another man with a sword; A dragon attacks some people, threatening to kill them. At one point, she spits on a man and ignites him, but the camera cuts away so we don't see him catching on fire; Dolittle pulls the armor and bagpipes from dead people the dragon has previously eaten out of its butt; A man falls into a chasm, presumably to his death, but we find out in a mid-credits scene that he's alive. He's then attacked by a swarm of bats. Disclaimer: All reviews are based solely on the opinions of the reviewer. Most reviews are rated on how the reviewer enjoyed the film overall, not exclusively on content. However, if the content really affects the reviewer's opinion and experience of the film, it will definitely affect the reviewer's overall rating.