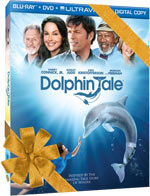 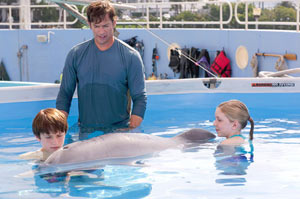 Alcon Entertainments Dolphin Tale is inspired by the amazing true story of a brave dolphin called Winter and the compassionate people who banded together to save her life.

Swimming free, a young dolphin is caught in a crab trap, severely damaging her tail. She is rescued and transported to the Clearwater Marine Hospital, where she is named Winter. But her fight for survival has just begun.

Losing her tail may cost Winter her life. It will take the expertise of a dedicated marine biologist, the ingenuity of a brilliant prosthetics doctor, and the unwavering devotion of a young boy to bring about a groundbreaking miraclea miracle that might not only save Winter but could also help thousands of people around the world. (from MovieWeb.com)

Films based on true events often interest me enough to research just how true it is to those "true events" the film is based on. Dolphin Tale, a family film inspired by a real-life dolphin who had been rescued only to have its tail lost and became the inspiration for thousands across the country. The solution for her missing tail ended up being the addition of a custom-made prosthetic tail for Winter, which allowed her to be able to swim without ruining her spine (which may result in death). The film version takes a wealth of liberties in telling the story, the greatest of which introduces a young boy into the story who was present when the dolphin was found. No such child was part of the real event, but clearly it makes for an interesting story, and with a pretty solid cast and crew in front of and behind the lens, Dolphin Tale turns out to be a worthwhile family film, for fans of the titular acquatic mammal especially. 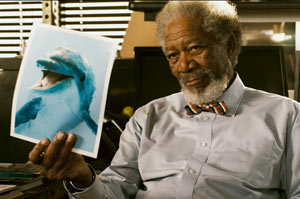 In Dolphin Tale, a boy named Sawyer, who's nursing the emotional wounds of his father having abandoned his family and is about to lose his best friend as well when his cousin goes off to war over seas, helps find this dolphin and turns out to be the key to helping the animal recover from its traumatic injuries. The Clearwater Marine Aquarium in Clearwater, Florida take Winter back to their facility and Sawyer ends up helping out the team there as they try to nurse Winter back to health. He first meets a sunny young girl named Hazel (played by Cozi Zuehlsdorff), who is quick to welcome him in, but her dad, Clay (played by Harry Connick Jr.) is more reluctant until he witnesses Winter's attachment to Sawyer. From this point on, the story becomes all about Winter's recovery and a series of dramatic events that one after the other pose some serious roadblocks in the restoration of Winter's health. In fact, the frequent dramatic plot points just tend to be a bit much; whether it's trouble with school, the animal rejecting the prosthetics, a hurricane threatening the town, financial destitution threatening the acquarium, or just the whole weighty topic of missing or injured limbs and prosthetics (including a scene of war survivors in a hospital all wearing varying degrees of different prosthetics), there may be too much drama for the film's own good. The relationship between Sawyer and Winter is sweet and endearing to watch, but it seems like those moments are much more infrequent than the dramatic ones.

The cast for Dolphin Tale help save it from being worse than it could have been. First off, the real-life Winter plays herself in many of the scenes involving the film's central dolphin. That alone brings a lot of validity to the film's grand venture. Nathan Gamble (Who played Jim Gordon's young son in The Dark Knight) is good enough as Sawyer to offer a pretty wide range of emotions and carry the film almost entirely on his own. There are times where it's noticeable that a stronger actor could have helped the film even more (like Joel Courtney, or really any of the kids in Super 8), but Gamble is sufficient enough. It doesn't hurt that acting talent like Ashley Judd, as his mom Lorraine, or Morgan Freeman, as Dr. Cameron McCarthy (which, by the way, this is at least the third film Judd and Freeman have starred in together), support Gamble in Dolphin Tale. Not much about the film ever really raises it above feeling like a pretty good B-movie, but in a time where really good family movies aren't quite a dime-a-dozen, Dolphin Tale is a decent find. 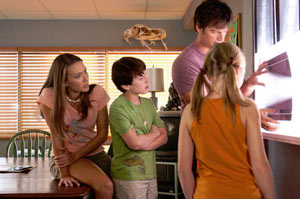 The special effects in Dolphin Tale aren't too bad for a lower budget family film like this one. The opening sequence shows some clearly animated dolphins swimming in the ocean that were probably also included just for the 3D presentation of the movie. Also, some of the effects present a minor problem for the film: unevenness. In the opening scene, we see a digital version of Winter blowing a ring of bubbles out her air hole and then swim through it, as well as some of the digital dolphin motions and expressions aren't entirely realistic. It makes one wonder right out of the gate what kind of movie they're about to watch. Later, a real-life pelican's eyes are clearly enlarged for a comical moment where it appears afraid and it just does not fit in with the rest of the film that otherwise takes events pretty seriously. I could understand if this was a comedy or something more goofy, but that just isn't the case with Dolphin Tale.

The content of Dolphin Tale isn't too bad either. The greatest concern may be the thematic elements of war injuries and prosthetics, as well as losing a parent (whether by death or one of them leaving), as well as being accepted in school. Sawyer is clearly having a tough time coping with some serious issues and this keeps the movie from being entirely warm and fuzzy. In the same way, this year's Soul Surfer also dealt with the topic of prosthetics but was considerably more harrowing as it dealt with a human losing a limb and not an animal. There is, however, a very, very strong family theme throughout the movie (the motto "Family is Forever" is said a couple of times), and it's refreshing to see that Sawyer's family is pretty tightly knit, even through adversity. They could have made the tensions between Lorraine and Sawyer be persistent--and dramatically overbearing--but they don't drag it out, and before long, the two are on common ground with supporting Winter. There isn't really any spiritual element to the film, however, Connick's Clay tells a bizarre story about a native Hutash tribe that believe dolphins were once human beings that were turned into dolphins. It's fleeting, but even one of the Blu-Ray bonus features puts Connick's story to animation (really, really awful animation). Another scene shows a child briefly "praying" to her deceased mother for help with Winter, which precedes the turning point for the animal. They're minor thematic moments, but I could understand some parents not being particularly keen on them. Thankfully, not a lot of weight is placed on either moment. There is no profanity spoken at all in the film, which is a nice change from most films these days, but there is one scene where a song plays over a scene and the lyrics include one "d*mn" and one "G-d forsaken," which is unusual considering how there was clearly effort made to keep the dialog clean.

Dolphin Tale isn't one of the best films of 2011, but as family entertainment, you could always do a whole lot worse. Fans of dolphins will especially want to check it out (although the obvious CG work used at times for the animal in place of showing a real one doesn't help), and those looking for something not entirely mindless for the family to tune into should do okay here. Just be warned that Dolphin Tale isn't completely bubbly fun, so you can expect some weighty plot elements along with this one. 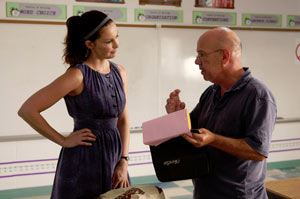 The Hutash Rainbow Bridge (2:26) - The story that Dr. Clay tells during the film is shown here on its own set to CG animation. The animation is absolutely horrendous as it looks no better than something you may have seen in a Nintento 64 video game many years ago. I'm not sure why this story needed to be highlighted outside of the movie, and why they even bothered with such terrible animation. You're best to just skip over it.

At Home With Winter (13:22) is a thorough behind-the-scenes look at filming on location with Winter the dolphin at the real Clearwater Marine Hospital. It's amazing to see how much work went into the film--to even go as far as the production team even having to build a new permanent addition to the Hospital to film Winter in a larger tank. It's a great featurette.

Spotlight on a Scene (7:17) focuses on the opening sequence and how they filmed the water and underwater opening without the dolphins and added them in afterwards digitally. It then compares the real-life Winter with the digital baby version of her in the opening scene.

Winter's Inspiration (18:08) is a mini documentary about the true story of Winter. Members of the real Clearwater Marine Hospital talk about the rescue of Winter and we get to see some of the real rescue footage that they filmed during the 2005 rescue. Here they talk about how the dolphin's tail came off on its own (and we see some gross photos of this process). We also hear from the real-life prosthetics company that devoted so much time and service to this dolphin. The story then focuses on how the technology they invented for Winter has actually come to be used for a lot of humans as well, helping people who previously had no hope for a prosthetic solution at all. It really is an incredible story. The featurette ends with a focus on the characters that weren't part of Winter's real story and were created just for this movie.

Ormie and the Cookie Jar - Original Animated Short (3:59) - I have no idea why, but there's a short cartoon included here about a pig that tries to reach a cookie jar that's sitting on top of a refrigerator. It's cute but a little cheesy. I didn't see Dolphin Tale in the theaters, so it's probable that this cartoon had appeared at the beginning of the movie on the big screen.

Gag Reel (2:49) - This is a short collection of goof-ups on the set. Most are just lines being flubbed or cues being missed, but it's amusing enough to watch for anyone who enjoyed the film.

Deleted Scene: Winter Meets Panama (2:21) - The single deleted scene shows another dolphin, Panama, being introduced to Winter (pre-prothesis). In the scene, Panama seems to reject Winter at first, but quickly warms up to her. It's a decent deleted scene, but it was wise to edit it out to omit some brief additional melodrama.

Blood/Gore: We see some blood on Winter's tail and on her mouth while she's beached; Winter's tale is blotchy and looks a little bit bloody; The sight of the dolphin with a stump instead of a tail may be unsettling to younger viewers