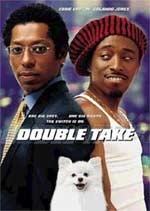 When a wealthy investment banker is thought to be the cause of a serious murder and ends up on the run, switching identities with another man appearing to be an off-the-wall con man. To his surprise, he finds that his replacement is even higher up on the wanted list than himself. It becomes an action comedy dealing with the mysterious situation leaving him not knowing who to go to and who to trust.

I had mixed feelings about this movie. Overall, I was a little disappointed in it's overall composure. Although I like Orlando Jones and Eddie Griffin seemed ok, the funny moments just didn't seem all that funny and the characters didn't seem all that believable. It had a feel, somewhat, of 1998's Rush Hour, but without the character chemistry, heart, and the abundant laughs. Also, it seemed more thrown together and haphazard, as well. The plot was often confusing but interesting. The movie never failed 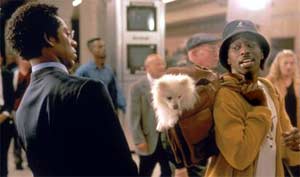 to entertain, but the quality of the entertaining was questionable. For a comedy, the laughs seemed few and far in between.

Content didn't help the movie along much with at least 40 "s" words as well as 23 "a" words and a barrage of other colorful phrases (with the black derogatory term "n*gger" being used a lot by the black stars to each other). Violence was frequent, with the worst being the villain accidentally shooting himself several times as he fell down a flight of stairs. Although played for laughs, the villain ends up shooting himself in the head off camera-- the whole scene wasn't bloody or gory at all, but the thought wasn't too easy. There is a lot of shooting and gunplay to keep the action flick fans happy, but another reason to keep the young ones out of the theater. Sex/nudity is mild, leaving it kept to a relative minimum with only a few comments and a business meeting at a lingerie show.

The movie needed to concentrate more on characters and witty dialog than making a plot that was unique, which ended up being more confusing, but still creative in a sense. It wasn't a total loss, but it's not one for the personal library. If you want a good action comedy team, wait for Rush Hour 2 this summer.

In summary, I didn't expect much after the bad reviews when I went into seeing it, so I didn't think it was too bad, but it could have/should have been better. It was PG-13 due to excessive language and violence which didn't help my opinion of it either. Due to all I've said, I have no choice but to warrant the movie a so-so rating of 2.5 out of 5. On that note,

Sex/Nudity: A few sexual comments; Daryl and his business associates go to a lingerie fashion show where various women modeling skimpy pieces are seen; Daryl has to wear Freddie's watch at one point which shows a topless cartoon woman's large breasts with only stars covering the nipples.

Alcohol/Drugs: Daryl and Freddy have some drinks from time to time as well as other characters, also the CIA mention drug operations and at one point we see people putting cocaine into a briefcase.

Violence: Several murders (most off screen, some on), a person is thrown from a train, lots of gun-shooting, a person is suprisingly shot in the head by another person off screen, and other assorted acts of violence. Disclaimer: All reviews are based solely on the opinions of the reviewer. Most reviews are rated on how the reviewer enjoyed the film overall, not exclusively on content. However, if the content really affects the reviewer's opinion and experience of the film, it will definitely affect the reviewer's overall rating.