- for crude humor and language.

For Dr. John Dolittle (Eddie Murphy), life couldn't be better. He has a healthy family life, a high-paying successful job about to make a several-million-dollar deal, and a great life! But unexpectedly, things take a turn for the worst!

After crashing his car into a garbage can & bumping his head, while trying not to hit a stray dog, Dolittle regains his childhood ability to speak with animals. Good? It proves not to be. The stray dog, Lucky (voice by Norm MacDonald), won't leave him alone & works his way into being part of the family, while the pet guinea pig, Rodney (voice by Chris Rock), won't stop talking! People start to think he's insane and Dolittle must try to keep his job, his family, & out of a mental institution, while trying to help sick animals in the process. Can he do it?

I must admit that this was the 2nd-funniest [modern] movie I've ever seen (2nd only to last year's Liar Liar)! Murphy does a great job, while so do the actors doing the voices for the animals. The absolute best aspect of the movie is Chris Rock's voice performance of the guinea pig. Granted, I'm biased having a guinea pig in the past & it's awesome to hear someone apply hilarious dialog to one, but Rock's delivery is great! 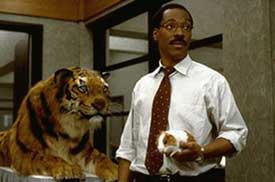 Complaints? Plenty. The language was fair... not as bad as it could be these days. But there were countless sexual references, so it seems. For some reason, Hollywood cannot make a clean comedy movie! Take notice that all comedies are PG-13. why? sexual references. Sure, there are PG comedies, but they are way too lame to even be watchable (these days), & there are R-rated comedies-- which means they're loaded with sex &/or bad language. Hollywood, please make some clean comedies?!

As far as the content goes... First of all, language. There are no "f" words or "S.O.B.'s," & only one possible "s" word (believe it or not!)... HOWEVER! they use "butt" often, the "a" word for that often, and they even use the slang term for the female "part" that starts with a "p"-- & is used as a double meaning with a tiger. The innuendo is quite high, not as high as most PG-13 comedies, but it's still present in unwanted quantities. Any blood or gore? None worth missing the movie for. (if that's the only thing that would bother you) There is a very quick glimpse of the surgery that Dolittle is performing, but it's not really bad.

The movie, overall, was good, funny, cute... & at times... perverse. So if you can stomach some innuendo & sexual references, than this is a good film. To be honest, I'd see it again... but maybe I just miss my guinea pig so much...

Sex/Nudity: There is a scene where Dolittle must give a patient a shot & we see part of her swollen rear end; at least 7 instances of innuendo, but I guarantee there's more... Dolittle & his wife have 2 encounters that were played up to leading to sex, but an animal always intervenes. No nudity or actions are present.

Alcohol/Drugs: Dolittle comments on taking drugs when he was in college; a monkey is an alcoholic

Blood/Gore: It's neither bloody nor gory, but we do see a woman whose face is quite swollen (an allergic reaction from eating shellfish); cottonballs in a man's nose are a little bloody; Dolittle performs surgery on an animal & there is a very brief shot of the surgery.