Dragons: Gift of the Night Fury 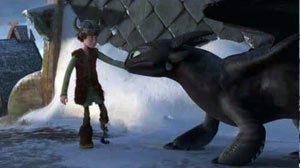 In Gift of the Night Fury, it's the Viking holiday Snoggletog in their village and suddenly all of the dragons take off without warning or explanation. Hiccup ends up investigating and uncovers a previously unknown ritual of the dragon species. It all amounts to a Snoggletog the vikings won't soon forget.

Last year, DreamWorks Animation surprised movie goers of all ages with their little gem called How to Train Your Dragon. A couple months later, the studio wrapped up their most successful franchise to date, another series originally based on a childrens book, Shrek. But DreamWorks isn't stupid; they see the potential of Dragons and are already primed to keep this franchise alive and kicking for a long time. Now, a year after the film's debut on DVD and Blu-Ray, DreamWorks has released a double-DVD set of two new animated shorts, complete with extras for the young fans.

I made the mistake of watching Book of Dragons first. Assuming both DVDs contained all-new stories, I figured Book was a new tale. In a way it is, but it mostly consists of stylized hand-drawn animation to give you, the viewer, a crash course in dragon types and classes. It's informative, entertaining, and cute, but the lack of a real story and the lack of the crisp CG animation of the feature film (which, granted, is at the beginning and end of the story, with a little sprinkled throughout - but are mostly recycled from the movie) really are a strike against the story. In the end, I felt a bit cheated. 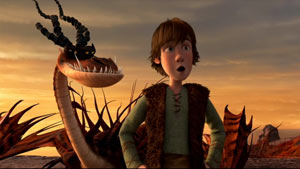 However, the Gift of the Night Fury story is the winner here. Maybe I appreciated it even more after the disappointing Book story, but this 22-minute tale (which is about the length of a half hour show without the commercials), is the series' equivalent of a "Christmas special." While the word "Christmas" is never used, the story centers around the Vikings' own snowy holiday celebration, humorously dubbed Snoggletog, that involves gift giving and holiday trees... much like Christmas. This mini adventure takes place after the events of the film and really feels like a natural continuation of the story. All of the star-studded voice cast return--from Gerard Butler to Jonah Hill and Craig Ferguson--making it feel even more so as a continuation of the original story.

Gift of the Night Fury is a cute one too. While it would have been nice for it to be an unashamed "Christmas" story (like the studio's Madagascar contributions), it's still festive enough to fit in with this holiday season's holiday story collection. It's definitely worth revisiting on an annual basis. And by the time the ending rolls around, it offers a touching finish.

My biggest beef with this set, however, is the double-DVD presentation. Book of Dragons has the look and feel of a bonus disc, yet it gets its own full case next to Gift of the Night Fury. It's ultimately not worth the additional shelf space dedicated to its 17-minute running time either. The Blu-Ray set has it right by including them together, which makes more sense, and that might diminish the feeling you've been gipped if it's not being touted as something significant on its own.

Nitpicking aside, fans of the original film and these characters won't want to miss this set. It may not seem like much, but it ought to help keep the stories fresh in fans' minds as the studio continues to ready the first feature sequel for its 2014 release. And for the young ones who just can't get enough of Dragons, a card with two codes to access the online game is included, as well as some deleted scenes for Gift of the Night Fury as well as a few other bonus features.

Violence: Just some mild violence in the Book of Dragons as they show some 2D animated cartoons that reveal the menacing nature of several of the various classes of dragons. In Gift of the Night Fury, there's just some mild slapstick style violence, but nothing especially rough or frightening.