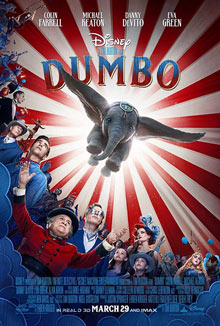 A young elephant, whose oversized ears enable him to fly, helps save a struggling circus, but when the circus plans a new venture, Dumbo and his friends discover dark secrets beneath its shiny veneer. (from IMDb) 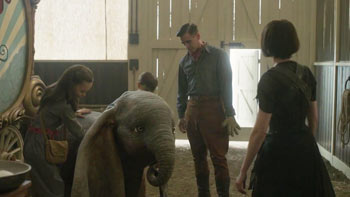 It's kind of a strange time in cinema right now for Disney. This year alone, the studio is releasing not one, but three live action version of classic Disney animated features. The first one out this year is Dumbo, a star-studded live action remake of their 1941 animated film. This remake comes nearly 80 years after its original, but it gives it a fresh and unique take on the family favorite circus film.

I remember watching the original Dumbo as a kid and liking it for the most part. But every time I've revisited it as an adult, it just feels like such a bizarre movie. (For example, there's even a crazy sequence where Dumbo accidentally gets drunk from drinking water that had champagne spilled into it and he hallucinates a psychedelic dancing elephant musical number.) The story is very slow-paced and told entirely through the perspective of the animals (and we hear their voices--like in most Disney animated films--but the human characters don't hear them). The story centered on circus animals being brought new baby animals (via storks) to their individual families, with a lone female elephant named Jumbo being brought a strangely large-eared baby elephant. Soon dubbed "Dumbo," the mother and baby are harassed and mocked for his freakish appearance, which leads to the two being separated once she causes an uproar under the big top. It has some sad, serious elements that make it anything but a light viewing, but there's a sweetness to it that has helped the movie endure over the decades since. With my most recent viewing (which was later the same night I saw this new film), I found that the movie actually felt long at just a meager 63 minutes, but then ended just after it was sort of picking up its pace. 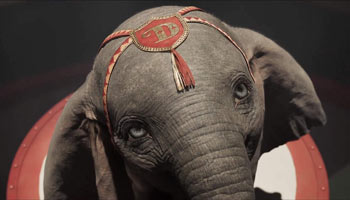 The live action film is very different. If anything, it feels like a more complete story. The focus is taken off the animals and is pointed at new human characters. Since no human characters stood out in the original movie, a lot of liberties were taken to introduce new ones, and to create a world for our titular elephant to dwell in. The original film also largely relied on a circus mouse being Dumbo's inspiration and support, which is a role that's given to the two children in this movie (although they make a nice little nod to that mouse here). When the film opens, a circus run by Max Medici (Danny DeVito) has been a bit down on its luck, and famed performer-turned-soldier Holt Farrier (Colin Farrell) returns from war to his find things very different than when he'd left. In the time he was gone, his wife passed away and he lost an arm in action (which we don't see), which leaves things in a pretty dismal state when he returns. Farrier is reluctantly put in charge of the elephants--including Jumbo--who then gives birth to "Jumbo Jr," who is largely met with repulsion to his gigantic ears. It's not until he makes his circus debut, though, that the real jeers and ridicule begin, causing the same kind of tent collapse from the original that leads to he and his mother being separated. But it's a plot point that then propels the rest of the story forward, giving Dumbo his own motivations and goal of being reunited with his mom.

Director Tim Burton has made a name for himself through the years for his macabre style and unique artistic style. He curbs the dark and twisted for this movie (you can see a good example of his more creepy and unusual work in the 2016's Miss Peregrine's Home for Peculiar Children). The misfit "freaks" in Medici's circus are more right up Burton's alley, however, as well as an eerie sequence in a "Nightmare Alley" at the "Dreamland" park later in the film. But, for the most part, Dumbo may be the most family friendly Burton project to date. Farrell is really excellent as Holt, while DeVito is absolutely delightful as Medici. He's a great mix of passionate, funny, whimsical and naive. Eva Green is a lot of fun as the elegant French dancer Collette, and Michael Keaton is clearly having the time of his life as the eccentric park owner, V. A. Vandevere. (He over acts in the part, but it's just so dang entertaining.) The only real kink in the cast, unfortunately, is Nico Parker and her performance as Millie Farrier. Her acting is so painfully wooden and robotic, she is far more lifeless than any piece of CG in the film. It's truly a wonder she ever made it past the audition phase. She has an extremely unnatural way of speaking, too, where she purses her lips after forcefully delivering every single line. And way too many scenes feature a dead-eyed performance where she doesn't seem to even try to emote in a given moment. (It's almost as if Burton directed her to NOT act.) Her presence does get more bearable as the film progresses and more characters take some of the spotlight, but early on, it's near excruciating to get through any scene she's made the focus of.

Thematically, the story does take a bit of an animal rights stance, which gets a little heavyhanded by the film's finale, but showing compassion and not holding animals in captivity it isn't necessarily a bad message to send our kids. It's also interesting to see Holt fall into a paralleled situation with Dumbo himself. Dumbo is an outsider due to his incredibly large ears, while Holt is discriminated against and looked down upon for missing an arm. As it turns out, the Farriers need Dumbo just as much as he needs them, and Burton makes good use of giving the underdogs of the story (the "freaks and geeks," if you will) a chance to shine. 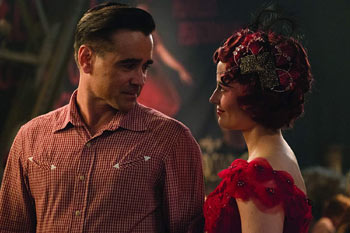 The content of the film is pretty good for a PG film. There's some of the bullying we'd expect in a Dumbo film, with a show stage hand whipping Jumbo and antagonizing Dumbo. He actually gets crushed when the big top collapses and we briefly see a sheet-covered body getting carried off on a stretcher (the man is also punched in the face a scene earlier by Holt, and his mouth has a hint of blood on it). The finale features a large park being destroyed in a fire and havoc breaking out as some characters try to escape the film's villains. There isn't much profanity, with one "Good G-d" from Holt, as well as about three uses of "h*ll." Finally, the aforementioned "Nightmare Alley" is spooky and creepy and will scare the younger ones, but it's not nearly as scary as some of the more intense scenes in Zootopia. Still, while I didn't take my 8-year-old son to see Dumbo, I think he would have found some of it scary for sure.

Overall, I was really impressed by this live action take on Dumbo. And, after revisiting the original, I feel like this movie not only improves on the story, but it gives it a different enough take to stand alone. Dumbo himself is also ridiculously adorable and lovable, and that just helps seal the deal. It's fun, entertaining, sometimes funny, sometimes sad, and altogether enjoyable. Ignore the mixed reviews it received and check out Dumbo.

Sex/Nudity: None, although it's slightly implied that Colette has some kind of relationship with V.A. At one point, it sounds like he's going to call her something vile, but before he utters anything insulting, she says "queen;" We see Max bathing from the top up in a bathtub, but there's no nudity below the waist.

Alcohol/Drugs: There is some drinking throughout the film. V. A. is seen holding a glass of liquor.

Blood/Gore: Holt punches a man in the face who was antagonizing Dumbo and Jumbo, giving him a little bit of blood to the side of his mouth; Holt lost his arm in the war. While we do not see anything gory, gross, or bloody, just the sight of him missing an arm (and the sleeve just dangling there, may unsettle some viewers.

Violence: Jumbo gets spooked at the circus and accidentally smashes the circus tent pole. It falls, crushing a man beneath it in the stands (We don't see this). We then see a body being carried out on a stretcher with a sheet over it; We briefly see a man's boots and some dialog is spoken that suggests he had them made from elephant skin. Later, he's instructed to get rid of an elephant and to "get himself a new pair of boots," suggesting he'd make them from the elephant's skin (he doesn't, however); During a show, is brought up to a fake wall with fires on it in order to put them out as a stunt. It then goes wrong when they reignite and he gets stuck at the top with no way down; A character tries to get on top of an elephant (to ride it) suspended in the air on a pedestal. However, the performer is horrified when they realize that the safety nets wouldn't be put out. They soon slip from the surface and hang off of the elephant but are narrowly rescued in the nick of time; Some evil men try capturing the Farrier kids, and chase them around a park; A fire breaks out in an amusement park and nearly kills several people. We see structures being engulfed in flames and falling down; We see an elephant chained up by the legs in captivity; Some characters narrowly escape being burned alive in a circus tent; A man pulls a knife from his boot and stabs into a tent to cut a hole in it; As part of an act, we see a man shooting bullets or pellets at balloons to pop them. Disclaimer: All reviews are based solely on the opinions of the reviewer. Most reviews are rated on how the reviewer enjoyed the film overall, not exclusively on content. However, if the content really affects the reviewer's opinion and experience of the film, it will definitely affect the reviewer's overall rating.