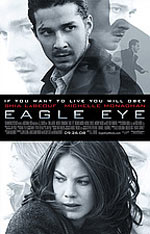 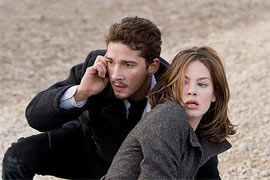 Eagle Eye is a race-against-time thriller starring Shia LaBeouf, Michelle Monaghan, Rosario Dawson, Anthony Mackie and Billy Bob Thornton. Jerry Shaw (LaBeouf) and Rachel Holloman (Monaghan) are two strangers thrown together by a mysterious phone call from a woman they have never met. Threatening their lives and family, she pushes Jerry and Rachel into a series of increasingly dangerous situations  using the technology of everyday life to track and control their every move. As the situation escalates, these two ordinary people become the country's most wanted fugitives, who must work together to discover what is really happening  and more importantly, why.

Technology can be a scary thing. And with the new action thriller Eagle Eye, anyone who's been even the slightest bit paranoid about "Big Brother" watching us will be tossed well over the edge. The idea behind Eagle Eye is not only intriguing, but promising. And the teasing trailers that didn't give away all too much were a nice way to spark interest and leave plenty of surprises within for the film's viewers. It was nice watching a movie that I had a basic knowledge of what it was about and not have seen most of it in the trailers already. But in the end, Eagle Eye falls in line with the kinds of runaway plots that made movies like The Island (or maybe even Firewall), as well as others, compromise their credibility for the sake of over-the-top action and thrills. 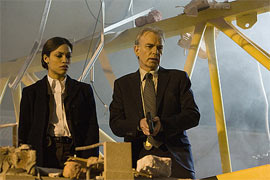 Eagle Eye is director D.J. Caruso's second outing, not only in PG-13-rated territory (his previous films included R-rated features like Taking Lives, Two For The Money, and The Salton Sea), but also with actor Shia LaBeouf in the lead. Last year, horror/thriller fans ate up the suspense of Caruso's Disturbia with LaBeouf playing a troublemaking teen on house arrest who believes his neighbor is a killer. For Eagle Eye, Caruso opts for more thrills than chills, and the end result is something oddly enough along the lines of I, Robot (which also starred LaBeouf) or even Wall-E in regards to theme, giving the film a sense of "Hasn't this already been done before?" but with an execution that's slick and in some ways still exhilarating. What doesn't work, most of all, is part of its execution. Whether it's a sloppily directed "Wait... what just happened?" car chase sequence (Please, Caruso... wide shots are okay. Really.), or some plot developments that don't quite add up -- or even a sort of Live Free Or Die Hard-esque tunnel chase, Eagle Eye never rises above that feeling that this not only could have been better, but you've seen better.

Those feelings really aren't due to any serious casting issues. If anything, Billy Bob Thornton has fallen victim to the classic FBI agent stereotype who not only doesn't believe our main character who really has been framed, but wise-cracks and makes those feeble threats at his own men just to prove how tough he is. Rosario Dawson is surprisingly convincing as Agent Perez and Michael Chiklis does well enough as Defense Secretary Callister despite not being given a whole lot to do. All the supporting characters aside, our main duo -- Jerry Shaw, played by Shia LaBeouf and Rachel Holloman, played by Michelle Monaghan -- are strong enough to carry the film, despite there not being a whole lot of chemistry between the two. However, there's an element to their mismatched teaming that feels more real than the idea that they're some kind of soulmates, and after the two are thrust seemingly randomly together, we learn deeper characteristics about both as the movie progresses. Caruso keeps the mood rather tense, and maybe even a little cryptic during the first half, with there being no real comic relief throughout the film to lighten the mood, as it takes itself seriously from beginning to end. This also may create some issues when the action gets a bit too fantastical for its own good. 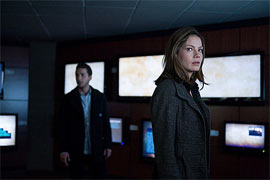 The content for Eagle Eye is a tricky one. Language is its biggest fault. Thornton tosses an "f" word to Dawson flippantly within the first quarter of the film, while "s" words and the occasional use of blasphemy permeate the rest of the flick. It's unfortunate, too, as it's clearly unnecessary, and even feels excessive in the chase sequence when Jerry and Rachel first meet. Beyond a meaningless conversation between a couple guys in the start of the film where Shaw encourages a friend to take his girl out for a fancy dinner to speed up their sexual activity, there isn't much else to complain about in the sexual content department, while the worst of the violence shows briefs glimpses of the slightly bloody, charred remains of a dead man, as well as a closeup of the victim's burned and bloody finger as it's being scanned for prints by police. In the end, it's language that viewers will most want to consider before viewing Eagle Eye.

Complaints aside, Eagle Eye is a very entertaining action thriller, but one that sacrifices originality at times, as well as believability to try to keep the audience interested. Some of the action sequences are impressive, but those expecting a bit more of a cerebral offering will find much of them worthy of eye rolls. It would have been considerably more enjoyable without all the language, but it could have also been a lot worse in all other content areas as well. So if you are still considering this one for a viewing, please check out the content breakdown below.

Sex/Nudity: During a poker game, Jerry tries to get his friend to up his wager (because he knows he's got a sure fire chance of winning), and asks his friend how long he's been with his girlfriend and if they're sexual yet. He then encourages him to take her out so he can soften her up for them to take it further (and makes a crude joke or two). When the friend loses, Jerry makes a crack about how he now doesn't have to buy herpes meds; Rachel makes a comment to a friend about how she wants to hear all about her "booty call" (we don't hear the story); A comment is made about the mysterious contents of a box being anything including someone's Viagra; We briefly see a partial view of Rachel in her bra, from behind, as she changes her shirt (it's not sensual)

Alcohol/Drugs: Rachel and her friends down glasses of beer with shots in them at a bar

Blood/Gore: Jerry has a couple bloody scrapes above his eye for most of the movie; We see the close-up of the burned and bloody finger of a man who was electrocuted. We then see brief glimpses of the whole body afterwards that looks pretty gross; A man who's hurt has blood soaking through his shirt near his belt, and has some blood on his hand and gun; A person is shot several times and we see the wounds on their shirt as well as a small pool of blood underneath them while they're lying on the ground

Violence: There is quite a bit of action violence. A group of people are destroyed by a missile (seen on a surveillance screen, not graphic; Jerry is apprehended by the FBI when he's set up and they knock him to the ground; A crane rips through a building, Jerry jumps out onto a train track and narrowly escapes; There's a long car chase that results in many car accidents, some cars being demolished (with people inside, obviously killing them), etc; A man is electrocuted when he tries to flee; Two people are forced to rob an armored car at gunpoint; There's a fight in an airport and a chase on foot, with some shots being fired, people being hit with things, etc; We see surveillance footage of a huge truck crashing into a car (we hear it killed the driver); A drone fires on some cars, there are some explosions, car accidents, etc; A mechanical arm knocks out a man; A person holds a gun on another person; A person is shot a couple times, and some other acts of violence. Disclaimer: All reviews are based solely on the opinions of the reviewer. Most reviews are rated on how the reviewer enjoyed the film overall, not exclusively on content. However, if the content really affects the reviewer's opinion and experience of the film, it will definitely affect the reviewer's overall rating.