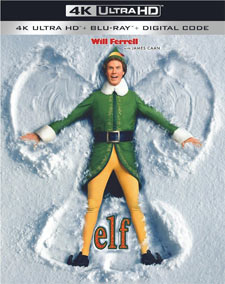 This hilarious Christmas film tells the tale of a young orphan child who mistakenly crawls into Santa's bag of gifts on Christmas Eve and is transported back to the North Pole and raised as an elf. Years later Buddy learns he is not really an elf and goes on a journey to New York City to find his true identity. (from Warner Bros. Home Entertainment) 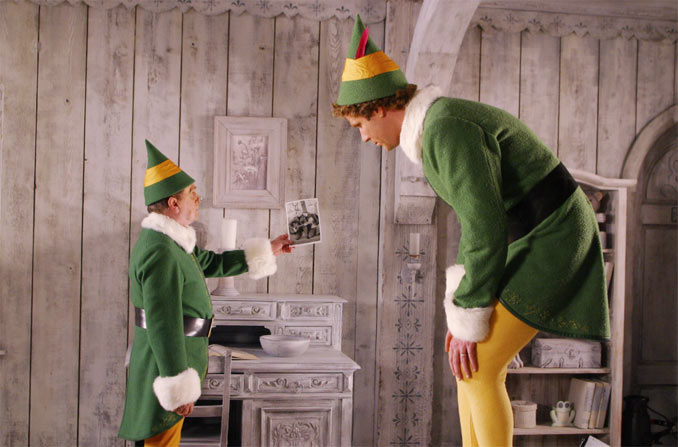 Elf is a Christmas comedy about a man raised by elves in the North Pole who sets out to find his real family in New York City. Buddy the elf is played by Will Ferrell of Saturday Night Live fame. Ferrell is an amazing character actor and it's nice to see him at his best here, stretching his acting wings. Elf is yet another family comedy that proves all you need is a good comedic actor and a good story without the vulgarities to make a hilarious film. Ferrell's antics as Buddy are so innocent and charming and often just downright funny. He embodies Buddy perfectly (I'd love to see outtakes from this), giving a childlike wonder to his personality that just helped make the scenario believable enough. The film's delivery is extremely lighthearted as well. A lot of the jokes border so much on the ridiculous that the more serious of watchers probably won't be able to enjoy. But the charm Ferrell exhibits in each moment of his screen time is worth the price of admission alone. Just expect one big, enjoyable cornball dish (covered in maple syrup). 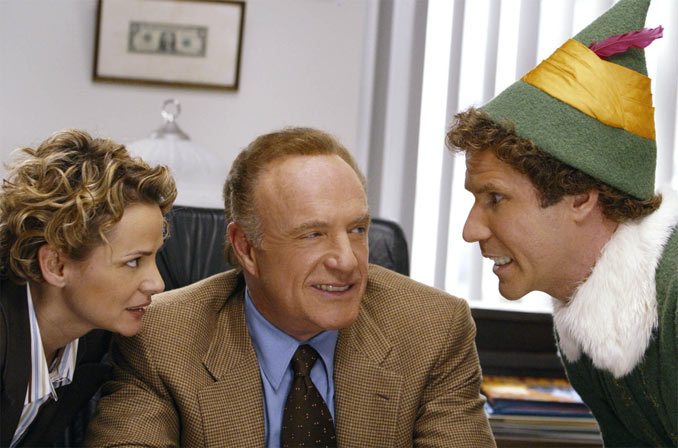 It's hard to find Christmas films these days that get the "true meaning of Christmas" right. While the act of giving and loving are big factors to defining the spirit of Christmas, most films like these miss out on the truth and wonder of the Savior's birth on Christmas day. Showing nuns twice in the film in a positive light is the extent of the spirituality of Elf, but the film serves as a benign piece of uplifting family holiday entertainment. The content is fairly clean with only a few awkward moments (and an incident where Buddy gets unknowingly drunk), and a couple cuss words, so it's nice to see a comedy as tame and smartly written as this one. My only beef with Elf was the sugar-overload of an ending where Ferrell's Buddy is given less of the comedic spotlight as they turn on an overly cheesy message aboutChristmas spirit. While it tiptoes across the fine line between being acceptable and overdone, when all is said and done, the film is just too lovable to let a few odd moments ruin the hilarity that precedes it. 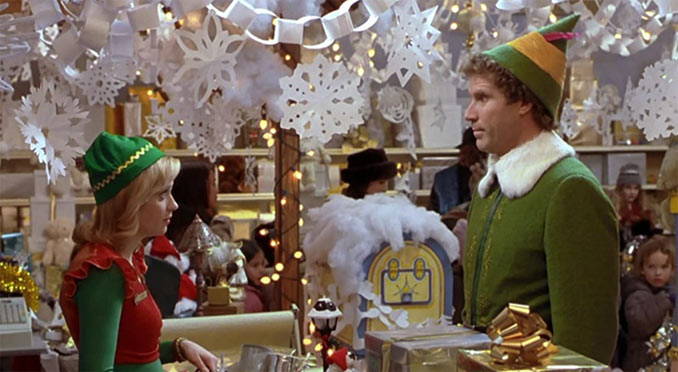 The supporting cast in Elf is near perfect. 23-year-old Zooey Deschanel played Ferrell's love interest, Jovie, who added a perfect cynicism to her part that helped contrast Buddy's naive, boyish enthusiasm. James Caan played off of Buddy very well as the straight man receiving the brunt of Buddy's hyperactive immaturity. Mary Steenburgen is also a great contrast to Caan's stoic character, playing a sweet ally to Buddy's seemingly delusional behavior. But the weakest member of the cast was the unimpressive and awkward Daniel Tay as Buddy's half-brother. I'm honestly not sure how he made it into this cast. He may look the part, but he seems very self-aware in several scenes and his acting feels forced.

Fans of Will Ferrell's work on Saturday Night Live are likely to find him hysterical in Elf. Those unfamiliar with him are liable to find his character either irresistible or intensely annoying. But Elf has got what it takes to be a memorable Christmas film you'll want to revisit each year.


Elf! When I reviewed this movie in 2003, I had no idea of the phenomenon that it would become. Elf has become quite the classic almost 20 years after its first release. Ferrell would go on to make pop culture comedy hits like Anchorman, Step Brothers, The Other Guys and Talladega Nights (among others). Director Jon Favreau would go on to make two successful Iron Man movies, as well as co-creating a hit Star Wars series in The Mandalorian. And Zooey Deschanel's star would continue to rise with her music career, starring in films like 500 Days of Summer and Yes Man, and being the star of her own hit show, New Girl. But Elf has cemented itself as the most popular modern go-to cinematic classic of the past couple decades. It's not a perfect movie, but it is a fun and delightful one. 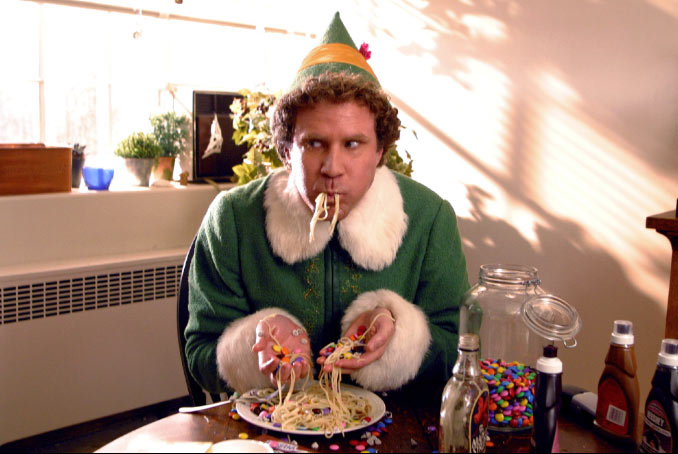 Because Elf released during the height of DVDs being the most popular choice for home viewing, it has never received the quality home entertainment release it deserves. Its eventual Blu-Ray release is by far one of the worst Blu-Ray transfers I've ever seen. It's more than obvious that the studio took its DVD transfer and slapped it on a Blu-Ray disc. It's only marginally better than the standard DVD quality. So, for 2022, 19 years after its release, Elf is finally, FINALLY getting a high quality transfer. I can say with great joy that Elf now has a beautiful, crisp UHD presentation we can enjoy!

This 4K combo pack comes packaged with a Blu-Ray disc, and I was instantly concerned when I noticed the art on the disc looked familiar. Sure enough, when I popped the disc into my player, I noticed that the Blu-Ray disc is NOT a copy of the new rescan of the film, but is in fact the aforementioned terrible Blu-Ray disc previously released. If you view the two resolution versions back-to-back, you'll notice that the Blu-Ray transfer is a little fuzzy in comparison, and you can really notice the dust and dirt specks that show up randomly on the screen from the original negative scan. I get that it was probably a cost issue to print brand new Blu-Ray discs with this new 4K rescan, but seriously... why include that crummy version with your 4K disc at all then??

If you don't have a 4K player, Warner Bros. also updated the digital transfer online to be this higher resolution rescan (Hallelujah!). Just a quick peek at the streaming quality reveals an immense upgrade from previous transfers. The contrast alone is substantially noticeable, and the previous, murky visuals are finally vibrant and clear. Even the tinsel and garland in the movie (like when Jovie is trying to get the citizens of New York to sing along) sparkles and pops from the screen. This scan is gorgeous. The color (while I do have it a little boosted in my TV settings) is so vibrant and rich. And this is a movie that needs that. The higher quality transfer also helps the movie not look 20 years old, either -- it revitalizes it for sure.

If you're a fan of Elf and have 4K viewing capabilities, toss out your DVD's and Blu-Ray's and pick up this new 4K release.

Sex/Nudity: We see Jovie in the shower from the shoulders up as she sings a song that Buddy hears from outside the store bathroom. Feeling compelled to sing along, Buddy begins singing along with her while in the bathroom and her unaware of his presence. When she discovers him there, she kicks him out; Walter tells Buddy to "lose the tights" (meaning to change into normal clothing), but Buddy mistakes his suggestion as a literal here-and-now instruction and drops his pants. We don't see anything, but Emily does as she walks in during this and screams.

Alcohol/Drugs: Buddy and a coworker get drunk; We see some guys in a bar with drinks

Blood/Gore: Buddy gets sick from running in a revolving door and throws up in a garbage can, but we don't see anything (just briefly and subtly hear it)

Violence: Cartoon-related violence including a raccoon attacking Buddy, a taxi hitting Buddy, a store Santa attacks Buddy, a small person attacks Buddy after he refers to him as an elf, a sleigh-chase scene through Central Park, etc. At the doctor's office, the doctor sticks Buddy's finger with a needle and he reacts in pain (played for laughs). Disclaimer: All reviews are based solely on the opinions of the reviewer. Most reviews are rated on how the reviewer enjoyed the film overall, not exclusively on content. However, if the content really affects the reviewer's opinion and experience of the film, it will definitely affect the reviewer's overall rating.