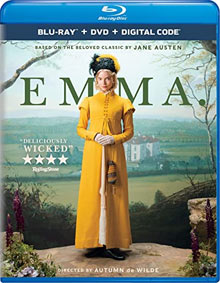 Jane Austen's beloved comedy about finding your equal and earning your happy ending, is reimagined in this. Handsome, clever, and rich, Emma Woodhouse is a restless queen bee without rivals in her sleepy little town. In this glittering satire of social class and the pain of growing up, Emma must adventure through misguided matches and romantic missteps to find the love that has been there all along. (from Focus Features) 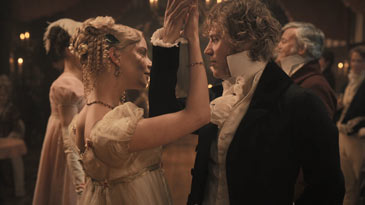 2020 brings moviegoers a new adaptation of the 1815 Jane Austen novel, Emma.. Starring Split's Anya Taylor-Joy as the title character, Emma. joins the likes of many other adaptations to give viewers another take on the Austen classic, bringing vibrant, lively visuals and a quirky sense of humor.

I can't say I've read anything by Jane Austen, nor do I think I've ever seen any other films based on her work before. However, the good buzz surrounding this PG-rated film--which released just before the 2020 pandemic closed theater doors around the world--indeed piqued my interest. I've only ever seen Anya Taylor-Joy in M. Night's Unbreakable sequels--Split and Glass--but the young actress has proven quite well that she's talented, and I was curious to see her take the lead in a period film like this one. 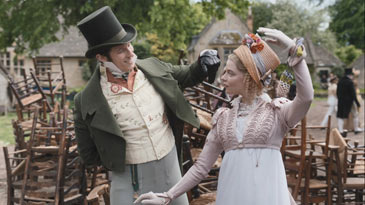 While I do enjoy an array of different genres in film, Emma. isn't really my cup of tea, I must admit. Like the recent Little Women, they are period films about romance and drama during the age of status in the post-colonial "Young Republic" era of the later 1700's / early 1800's. And both films are what some might call "slow burns" where it takes some time to really get into the story and invested in the characters. For me, I had a hard time deciphering what Emma. was trying to set up (without reading a synopsis beforehand), and which characters to follow (well, besides Emma), all the while struggling to keep track of who is who and who is talking about whom. But strong players and offbeat comedic moments save the day as the story reveals itself.

Perhaps the real star of Emma. actually isn't one of the cast at all. The cinematography, scenery, costumes and overall period aesthetic is breathtaking. Director Autumn de Wilde knows how to make each frame a feast for the eye. Whether it's the use of color and pattern coordination, or framing a shot beneath a gorgeous, blossoming weeping willow tree, Emma. is a visually captivating film, without relying on spectacle for spectacle's sake. To add to it, Isobel Waller-Bridge delivers a wonderfully whimsical film score that is very classical and elegant, while also playing to the comical and quirky moments.

If you read my critique of the 2019's Little Women, one of my beefs was that a couple of the male characters really lacked. Where it was supposed to make sense as to why several of the sisters might fawn over one of them, I found the character to be charmless and largely uninteresting. Here, the male characters are either comedic and surprising (like Mr. Elton), or all-around complex (Mr. Knightley), while others might be more unexpectedly devious. The performances for these characters are solid and believable. These actors felt as though they actually fit within the time period they were supposed to. I have to give props where it is due, especially, to the likes of Johnny Flynn and Callum Turner, and of course the always fantastic Bill Nighy. 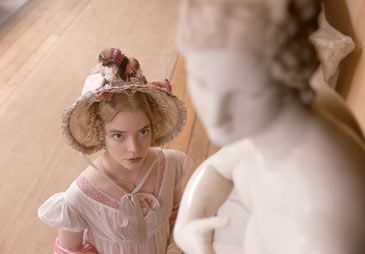 The content of the film is mostly PG, although there is some brief full-rear male nudity that is altogether surprising and unnecessary. We see a man's full bare backside (and butt) as his servant is helping him change his clothes. It's not sexual in nature, but it is rather jarring. Similarly, we briefly see the side of Emma's bare hip up to her waist when she pulls up her dress at one point (it's also not sexual). Otherwise, the only sensuality is in the form of a passionate romantic kiss at one point, and some flirtatious moments. There isn't much to speak of by way of violence, but a character briefly has a sudden nosebleed in one scene, and a man loses his temper and stomps the floor of a carriage while conversing with a woman (his outburst is also unexpected). Finally, the only language is a single "Good G-d" used as an exclamation.

Overall, if you're a fan of Jane Austen's work, any of the cast, or enjoy period films that take place in the early 1800's, Emma. is a good film to check out. But if you're not too intrigued by the romantic pursuits of the priveleged during this elegant time period, Emma. isn't really for you.


Emma. is available on Blu-Ray/DVD/Digital, DVD, and through the usual digital providers. This is a beautifully visual film and its Blu-Ray transfer is just about as good as any 4K transfer I've seen. It's crisp, vibrant, colorful, and a truly lovely film to look at.

Along with the feature film, the Blu-Ray disc and iTunes digital copy include the following extras:

Deleted Scenes (13:24) - There are 10 deleted scenes with a Play All option. "Miss Smith Waits for Tea" shows Emma getting tea for Harriet. "Mr. Elton and the Portrait" shows him getting ready to deliver the portrait of Harriet. He kisses the rolled up paper and rides off on his horse. "It's Dark in Here" is a humorous scene where Mr. Woodhouse asks to be surrounded by shades but then complains it's too dark to read. "I Never Dine with Anybody" shows Mr. Elton, Mr. Knightley and another man talking at a party about getting snowed in. "Gossip at the Haberdashery" features Churchhill talking to Emma in the store about Jane. "Let Us Pay a Call to Jane Fairfax" has Emma going to see Jane with Harriet. In "Freshen the Sponge, Bartholomew," Mr. Woodhouse orders his servants around. "Dressing Miss Woodhouse" parallels the previous scene where we see Mr. Knightley getting dressed. Here we see Emma in just a loose, translucent slip before her servant helps her get dressed. It's a little revealing, so I'm not surprised this got cut; it may have been done to maintain the PG rating. In "A Post for Dear Jane," Mr. Elton's wife tries to get rid of Jane. In "You Owe Me No Apologies," Jane apologizes to Emma for keeping her secret.

Gag Reel (10:53) - WARNING Even though this is a PG-rated movie, this blooper reel is UNCENSORED and definitely R-rated for language. None of the profanity is censored. As such, I counted at least 7 uses of the "F" word, 1 "h*ll," 2 "t*ts" and 1 "a**." It's otherwise a cute and amusing gag reel that proves the gang had fun on set, but I think that could have just as easily been conveyed with a handful of bleeps added in there in case families tried watching it together.

A Playful Tease (4:57) - This is the first of three little featurettes. This is more of a making-of featurette that focuses on the film's cast, which reveals that Anya (Emma) and Mia (Harriet) were already real-life friends from having previously worked on another project together.

The Autumn Gaze (4:46) - This one is about Autumn as a director -- her style, approach and attention to detail.

Creating a Colorful World (4:48) is about the film's style, use of color, and the wardrobe style.

Sex/Nudity: We see a man's full bare backside while changing; We see the side of Emmas hip/butt when she lifts up her dress; Mr. Elton slowly unties his cape in front of Emma while staring at her. The carriage hits a bump and lunges and he falls into her. She acts like he did it on purpose and scolds him, and then he confesses his love for her.

Alcohol/Drugs: People have glasses of wine and such at parties.

Blood/Gore: We see a drop of blood dripping from Emmas nose. She wipes it and we see a little left on her lip.

Violence: Mr. Elton unexpectedly yells and stomps his foot to stop the carriage he is riding in; Harriet is carried by a man who says she was supposedly attacked by gypsies. Disclaimer: All reviews are based solely on the opinions of the reviewer. Most reviews are rated on how the reviewer enjoyed the film overall, not exclusively on content. However, if the content really affects the reviewer's opinion and experience of the film, it will definitely affect the reviewer's overall rating.