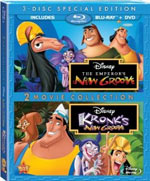 Kuzco is the "emperor of the world" and quite frankly the most heartless spoiled brat on Earth. When his advisers Yzma and Kronk are fed up with him, they devise a plan to kill him. Unfortunately for them, their plan backfires and instead of poisoning him to death, he's turned into a llama. Then begins a hilarious adventure for Kuzco as he and a local peasant, Pacha, struggle to get him back to the palace to return him to be a human while escaping Yzma and Kronk who pursue them.

In 2000, Disney released what can be arguably considered one of their most bizarre animated ventures still to this day. The Emperor's New Groove was more like a Looney Tunes outing than your typical Disney feature, enlisting random, silly humor and expressive hand-drawn animation to match. The story revolves around a spoiled teenage emperor named Kuzco who, on the eve of his eighteenth birthday, is retaliated against by his assistant, the evil Yzma, and becomes the target of a murder plot. However, Yzma's own assistant Kronk goofs up, mistakenly giving Kuzco a potion that would turn him into a llama instead of killing him. She then makes him dispose of a passed-out Kuzco, but his conscience makes him change his mind, and he accidentally loses the unconscious Kuzco in the hands of a local peasant named Pacha. Pacha had recently been told by Kuzco that his home would be demolished for the teen's own new play land, and it's quite the shock for both of them when a now vulnerable emperor finds himself in the care of an unlikely ally.

Does that sound crazy? You bet it is. Comedian David Spade voices Kuzco with a childlike sarcasm and selfishness that is a wonderful match for John Goodman's more naive and innocent Pacha. It's Spade's best pairing since his days with Chris Farley, and silliness indeed ensues from the situation. From raging rivers and a run-in with jaguars, to a vengeful squirrel and Pacha and Kuzco being forced to pose as a honeymooning couple to get into a no-llama restricted restaurant, it's hyper, it's zany, and it's a lot of fun.

Sadly, most contemporary Disney fans didn't quite appreciate The Emperor's New Groove and the film is probably considered one of the studio's biggest disappointments. After all, Atlantis: The Lost Empire followed in 2001 and then Lilo & Stitch and Treasure Planet in 2002, Brother Bear in 2003, and then Home on the Range in 2004, before switching to their first non-Pixar computer animated film in 2005 with Chicken Little (incidentally, also directed by Groove's Mark Dindal, but to less satisfying results). All this to say, Groove probably hadn't helped the case for hand-drawn feature films before CGI movies (like Pixar's, DreamWorks' and Fox's) took over the animated format. Still, if you love random humor (the Cloudy With a Chance of Meatballs movies are a great example), then you'll probably love The Emperor's New Groove.

The content isn't too bad, but you have to keep in mind that the plot involves a murder attempt. Yzma is frequently talking about poisoning and killing Kuzco. At one point, upon seeing him as a llama, she even exclaims "He's supposed to be DEAD!" She then embarks on a journey to try to finish what was started with the poisoning, and there's even a brief funeral scene when she assumes Kronk had taken him out to be killed (She then ends the ceremony with "Well, he's not getting any deader!" and starts branding the palace with her image). Later on, Kuzco dresses in drag to sneak in to the aforementioned llama-free restaurant, and when Kuzco passes out in the 'raging river of death' sequence, Pacha is forced to give him mouth-to-mouth, which Kuzco later complains is a "kiss." Also, there's frequent name-calling from Kuzco to Pacha, where he calls him "fat," "ugly" and "stupid," among other things. And we see the two punching and biting each other in one sequence when they're arguing. Basically, it may be edgier for younger viewers who you might not want to see imitate some of the behavior.

Now, in 2013, The Emperor's New Groove still remains my favorite non-Pixar animated Disney film of all-time. It's held up beautifully nearly thirteen years later, and it's still a delight after many revisits. It's one of Disney's most fun entries into their animated catalog.


For 2013, The Emperor's New Groove makes its Blu-Ray debut. It's vibrant, colorful, and absolutely crisp in picture. I just loved how it looks in HD. I originally picked up the 2001 DVD release when it came in a double-disc ultimate edition, and it was loaded with all kinds of extras -- so much so, that it had two discs and a map included inside to navigate the extras. On this set, the following extras are included... NONE. That's right, to my dismay, there are NO extras in this set! The only extra is the blu-ray version of the 2005 direct-to-DVD sequel Kronk's New Groove (full 2005 review here), but that's it. The packaging includes both movies on one blu-ray disc and then two DVDs - one for each film. I'm absolutely puzzled as to why not a single bonus feature is included here. This may officially be the more bare-bones Disney disc I have personally ever seen for an HD release (although the one for The Rocketeer was pretty thin too, but so was its DVD release--as opposed to Emperor's New Groove having had a wealth of extras).

After rewatching The Emperor's New Groove 2: Kronk's New Groove in 2013, eight years after its release, I have to admit it's about as disappointing as sequels come, but not nearly the train wreck that Atlantis 2 and Fox and the Hound 2 were. But, as it is, Kronk's New Groove is schizophrenic at best. While Atlantis: Milo's Return felt like three separate stories forced into one, Kronk's feels like two. They use the flashback method to tell two separate stories within one narrative that also uses a flashback. So, we literally have two flashbacks within a flashback that leads to the "present" of the story. It tries so hard to follow the exact formula that The Emperor's New Groove used, that it even opens with Kronk splashing about in a puddle of cheese fondue, like Kuzco pitifully sat sopping wet in alone in the jungle rain in the opening of the first film. And like Kuzco interrupted the first film to tell the story to get back to him, he interrupts this one a couple times just to be included. It reminds the viewer how much we actually miss him while the story involves everyone but the main character from the first movie. Cars 2 made the same mistake when it ended up being all about Mater the second time around. But, for Kronk's New Groove, the first half of the movie is really the best. Yzma returns, brilliantly having been turned back to a human with just a cat's tail remaining, but the wittiness does end there. Her grand plan this time? To swindle old people out of their money by selling them slime in a bottle as a "youth potion." It's stupid, and not nearly as fun as the first film, but it's kind of fun to see everyone back. The second half of the movie is a love story where Kronk meets Ms. Birdwell, a fellow Jr. Chipmunks counselor. She's basically a Mary Poppins type character, and their scenes together quickly get unbearable as they constantly call each other "Kronky Poo" and "Birdy Poo" (Birdy Poo. Yes. They went there). It's pretty painful. It all ends with a moral focus on being loyal to friends and doing the right thing, but it's tough to see how the journey getting to that resolution was worth it. (2.5 stars out of 5)

If you're a fan of the film and don't care about bonus features, this is the perfect set for you. But if you'd like more than just the two movies, you're out of luck. It's definitely the best picture presentation of the movie ever released, but the omission of bonus content is truly criminal!

Sex/Nudity: Pacha gives llama Kuzco mouth-to-mouth after he passes out in the river. When Kuzco awakens, he's horrified. It then cuts to Kuzco gargling and Pacha defensively saying "For the last time, it was not a kiss!"; Kuzco, as a llama, poses as Pacha's wife to get into a llama-free restaurant. When he walks into the kitchen at one point, a man checks out the disguised Kuzco from behind and turns to Pacha, giving him a thumbs up; Yzma, while threatening Kuzco and Pacha, starts to hike up her dress to reveal part of her leg. They act horrified at the idea, and when she reveals that it's a knife strapped to her leg, they act relieved.

Alcohol/Drugs: Kronk gets drinks for Kuzco, Yzma, and himself. Although we don't know what they are, they're most likely alcoholic (even though Kuzco is only 17).

Violence: A lot of slap-stick comedy: Kuzco and Pacha fist-fight with him punching Kuzco and Kuzco biting him back, etc; Yzma tries to kill Kuzco by poisoning him, but Kronk accidentally gives him extract of llama instead; Yzma smashes stone busts of Kuzco's head to get her frustrations out on him. She then imagines a way to kill him in which she turns him into a flea and boxes it up, mails it to herself and smashes it with a hammer; Jaguars chase Kuzco; Scorpions and bats attack Pacha and Kuzco; Yzma's men chase Kuzco and Pacha and are accidentally turned into animals. They then run after our heroes and fall through the face of a giant statue (perhaps to their deaths? we never see them again); and other cartoon violence. Disclaimer: All reviews are based solely on the opinions of the reviewer. Most reviews are rated on how the reviewer enjoyed the film overall, not exclusively on content. However, if the content really affects the reviewer's opinion and experience of the film, it will definitely affect the reviewer's overall rating.