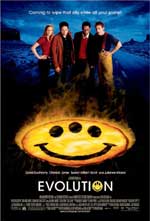 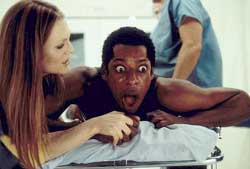 When a meteor hits the Earth, two scientists from a community college, Ira Kane (David Duchovny) and Harry Block (Orlando Jones) discover what appears to be life growing from the meteor. But not just any kind of life form... it's life that is growing and "evolving" at an alarming rate. It isn't long before this life spreads across town and begins causing turmoil. It's then up to Ira and Harry to learn more about this new life and to figure out how to stop it from taking over.

Those of you who have seen the previews for 2001's Evolution, directed by Ivan Reitman, may remember how they push the fact that it's by the same director as 1984's smash hit, Ghostbusters. Now, while I was a child of the 80s and found Ghostbusters to be one of my favorite movies (and still is), I also realize that this director filmed 1998's ridiculous Six Days, Seven Nights. But hey... everyone has their off days right? Or, in this case, off movies?

To be blunt, Evolution ain't no Ghostbusters. The chemistry between the main characters is pathetic in comparison to that of the 1984 film. But are there any similarities? Heck yeah! First off, you have a few scientists that are basically failures who find their niche in an odd form of science (ghost-busting and in this case... a super-fast evolving alien species). The legal problems the characters face are similar, and the overall feel of the idea has some similarities (as well as, minorly, the ending). But what hurts Evolution is that it does not take itself seriously in anyway. Although that's basically okay, it just tends to make certain aspects of the film out to seem stupid more than anything else. Ghostbusters was a comedy done in a "it could happen" fashion. Evolution focused more on the comedy aspect and compared to Ghostbusters, as they have chosen to do, doesn't come anywhere near it in originality, humor, and character development.

With that said, I was disappointed with this film cause I either expected it to be funnier, or to take itself a little more seriously to have a more intriguing plot. The characters are likable (except I didn't care for Sean William Scott's stupid character). Orlando Jones and David Duchovny are certainly an interesting team, and they work well together. Julianne Moore's character was good, and was also an interesting addition to the mix, but her down-right clumsy nature didn't seem to fit in the film when used. The things that saved this movie from utter ruin was certainly some of the likable characters as well as the incredible and exciting special effects. Evolution has more of a Men in Black feel, just goofier, and much more light-hearted. 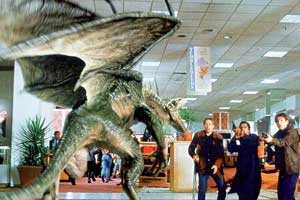 Content was surprisingly disappointing & unnecessary. There's a considerable amount of sexually-related dialog or innuendo. Nudity is limited to Ira mooning a soldier (we see his bare butt). Language, besides the pesky innuendo includes a few "s" words and several other colorful ones. Blood/Gore is low, with a few minor acts of sci-fi violence, and the extent of the blood/gore including a creature spitting out a sac that opens to release another.

Overall, I thought the movie was OK. I was disappointed it wasn't more like Ghostbusters and I feel it could have been a whole lot better. With that and the irritating sexual innuendo taken into consideration, I grant this film 2 stars. Please read all the content details carefully. The verbal content alone makes it unsuitable for young kids (although they most likely won't get any of it), and the creatures may be to frightening for some of the other young ones.

Sex/Nudity: After the General angers him, Ira moons him and presses his bare butt up against their car's windshield. Ira harasses his ex-wife about having one of his shirts, so she stands up and starts removing the shirt she's wearing and we see her bra underneath but she is stopped before she finishes. There is a lot of sexually-related dialog in the film. None is really explicit, but include Harry mocking Allison by telling Ira she needs a "good humping" and he proceeds to mock her by saying "Ira," as she might in a sexual way, as he makes exaggerated thrusting motions with. Although this is all done for a comical effect, it's completely unnecessary to be in the film. Allison and Ira find a parked vehicle and jump inside (it's heavily implied that they have sex).

Alcohol/Drugs: Drinks are seen during some parties, and some students bring Harry and Ira some beer.

Blood/Gore: While inside the cavern, Harry accidentally steps a little alien creature and squashes it, spilling its gooey guts. We see a large creature resembling a mosquito moving around under Harry's skin on his leg. A large dinosaur-like creature spits up a sac that then breaks open to reveal a smaller creature. A person has a slightly bloody bandage on their hand. There is a little bit of blood when a creature resembling something of a primate is shot. At the end, a gigantic alien explodes, and its gooey guts land everywhere.

Violence: Some violence. A man is dragged into the water to his death; a dinosaur grabs a person and flies around with them; some shot guns are used to detain a creature; A creature explodes, sending its guts everywhere; primates attack some humans; a creature attacks a woman, etc. Disclaimer: All reviews are based solely on the opinions of the reviewer. Most reviews are rated on how the reviewer enjoyed the film overall, not exclusively on content. However, if the content really affects the reviewer's opinion and experience of the film, it will definitely affect the reviewer's overall rating.