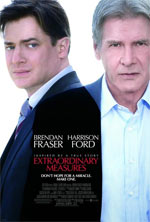 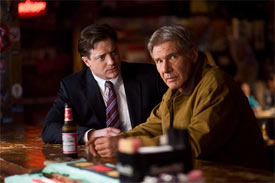 In the tradition of great inspirational dramas, Extraordinary Measures is inspired by the true story of John Crowley, a man who defied conventional wisdom and great odds, and risked his family's future to pursue a cure for his children's life threatening disease. From his working class roots, John Crowley (Brendan Fraser) has finally begun to taste success in corporate America. Supported by his beautiful wife Aileen (Keri Russell) and their three children, John is on the fast track. But just as his career is taking off, Crowley walks away from it all when his two youngest children, Megan and Patrick, are diagnosed with a fatal disease. With Aileen by his side, harnessing all of his skill and determination, Crowley teams up with a brilliant, but unappreciated and unconventional scientist, Dr. Robert Stonehill (Harrison Ford)... (from extraordinarymeasuresthemovie.com)

Extraordinary Measures is the latest medical drama to hit the big screen. The story is based on true events involving a man named John Crowley who risked everything he had to save his two children dying of pompe disease - a horrible affliction that causes the muscles in the human body to break down. Most children don't live past nine years old with this disease, so for Crowley it became a race against time to try to find a cure for his children. In Extraordinary Measures, Brendan Fraser steps in as Crowley, teaming the usually comedic actor with veteran Harrison Ford, who portrays Dr. Robert Stonehill -- a fictional character (compared to the real story), but a man in the film who had become Crowley's only hope for helping his children. 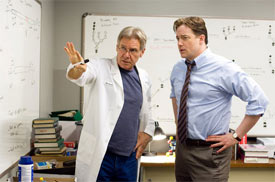 I'll admit, Extraordinary Measures is not my favorite kind of movie. I'm not much for medical stories or really dramatic emotional tales. But there was something about this story - and the intriguing pairing of Ford and Fraser - that made me want to check it out. And I'm glad I did. While Fraser's strong points are not in the dramatics, he performs adequately to win the audience's sympathy throughout the film. Ford is great as the grumpy Stonehill, even if his character is entirely made up for the sake of the film. The film's best moments are when Ford and Fraser are together, and there are just enough of those to keep the film moving along - and even fun when it needs to be. With movies that are so heavy thematically - like in this case involving a race against time to save dying children - the audience needs some humor to lighten the mood some. Ford's abrasiveness as Stonehill is fodder for some of these humorous moments, while Fraser understandably plays it pretty straight and serious throughout the film.

The most intriguing plot elements I found were actually what some might find as the most tedious or uninteresting. The hoops Crowley and Stonehill had to jump through, and the logistics of trying to get a drug solution researched, tested and passed were pretty interesting. It added to the drama and the tension of Crowley's pursuit for a cure. I don't know how accurate the portrayal of how the process might go really is, but it was rather fascinating to me. It probably wouldn't have worked as well if done in a documentary-style, but given the players involved in Extraordinary Measures, it works well on an entertaining level. 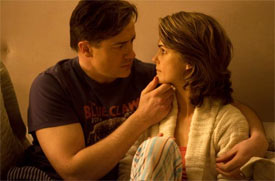 The content is surprisingly rougher than one might expect for a PG rated film with such subject matter. Ford's cranky scientist Stonehill frequently uses profanity and other colorful language, including many uses of the "s" word and some blasphemy as well. There's a brief scene where Crowley cuts his hand on a windowsill and we see some resultant blood on his hand, but that is surprisingly the extent of anything bloody in this medical drama. As far as sexual content goes, there's also a brief scene where Crowley's wife Aileen finds John sleeping in an armchair after doing research all night, and she begins kissing him (she's in a robe and pajamas, he's fully clothed). We then see a nurse walk up to the house and let herself in, and she hears playful sounds coming from the living room. John then stands up from a couch and his pants fall to his ankles (revealing his boxers) and Aileen pops up from the couch embarrassed and flustered. It's a lighthearted and innocent moment, although I'm not sure the significance to the film. It's unfortunate, however, that there is so much language in the film because it otherwise would be a great family film. Given the subject matter, however, it's not a film kids would enjoy and is really meant for an adult audience.

Extraordinary Measures isn't the kind of movie you rush out to see or even recommend highly, but it's an inspirational drama filled with hope for miracles and victories against all odds. Fans of the cast or any similar emotional or medical dramas will enjoy what Extraordinary Measures has to offer. However, anyone looking for anything more than that, or fluffier entertainment, will indeed want to skip this one. It's a weighty film, so you don't expect a light popcorn film in Extraordinary Measures. 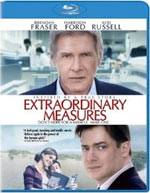 The inspirational medical industry driven drama Extraordinary Measures released in January to theaters to a humble reception, but is looking to get more exposure with it now on video. In HD Blu-Ray format, the film looks crisp and clear, helping to pull the viewer into the Crowleys' emotional journey. In addition to the feature film, the Blu-Ray and DVD also include some bonus content to deepen the viewer's experience of the movie.

Deleted Scenes (9:22) - Leading off the special features on the DVD and blu-ray for the film are almost 10 minutes of deleted footage. Most of the scenes are the usual minor fill-in material that end up on the cutting room floor for time and pacing, but this batch is worth taking a look at if you enjoyed the film (casual viewers won't mind either way). The collection opens with a brief scene that shows John's viewpoint of walking down the street and seeing a neighbor who is a businessman like himself, but with two perfectly healthy children running around him. The next series of sequences are rather brief, including someone expressing their appreciation for what John and his wife are doing, a slightly longer scene which has John trying to talk business on the phone while getting interrupted by a call from Megan asking if she could buy something (which just furthers the point about how John's efforts to help his children was causing a rift in his own home life), a scene showing the lab team cleaning up and trying to look presentable, Dr. Stonehill being invited to a staff lunch but rejecting, and a snippet showing Dr. Webber and John walking and talking. The last three longer scenes first show John coming home and finding not only a dog in his home, but a new nurse as well. Then the longest sequence in the bunch features John and Aileen at a beach house where the two get into a tense argument due to the stress they're enduring. The deleted scenes end with a short morning-after scene of them making amends. The last two scenes seem to be the more substantial of the omitted content, but none of the cut scenes would have added much to be left in.

Meet John Crowley (4:35) - Here we get a first-person telling of the real John Crowley's experience from the birth of his children to their diagnosis with Pompe Disease and how he got started fighting for a cure. Towards the end of the video segment, Fraser and Ford briefly reflect on the real Crowley and we see footage of the real Megan and Patrick as they visit the film set in the Spring of 2009.

Extraordinary Measures: The Power to Overcome (10:43) - This is the real gem of the bonus features. Anyone interested in the actual behind-the-scenes making of the film, will enjoy this inside look into director Tom Vaughn's venture into getting this film made. We see quite a bit of interview footage with Ford, Russell, and Fraser as they talk about the film, the Crowleys, and working together as actors (and some of it was actually used in the "Meet John Crowley" segment as well). We also see footage of scenes being acted out while the cameras are rolling, and even hear Fraser gush a bit about getting to work with his acting hero, Ford.

While the home video release of the film is a little slim on the special features (the only other feature is a series of film previews, surprisingly including Christian films Fireproof and Facing The Giants among mainstream ones like Dear John and The Back-Up Plan), the blu-ray version of the film also includes some more in-depth features via BD Live. But overall, what the on-disc features offer are substantial enough to take you a bit further into the film's inspirational story. Still, it would have been nice to have a commentary track on here from either Vaughn, Fraser, or Ford - or even the real-life Crowleys - but the interview footage included in the featurettes is still a nice touch.

Sex/Nudity: There's also a brief scene where Crowley's wife Aileen finds John sleeping in an armchair after doing research, and she begins kissing him (she's in a robe and pajamas, he's fully clothed). We then see a nurse walk up to the house and let herself in, and she hears playful sounds coming from the living room.

Alcohol/Drugs: We see Crowley and Stonehill drinking beer in a bar; We see some beers at Stonehill's place and in his lab at different times

Blood/Gore: There is some blood on Crowley's hand after cutting it on a windowsill. We then see a little bit more briefly as he rinses it off in a sink.

Violence: A man is held at gunpoint by a security guard when he is found in an area he has no clearance for. Disclaimer: All reviews are based solely on the opinions of the reviewer. Most reviews are rated on how the reviewer enjoyed the film overall, not exclusively on content. However, if the content really affects the reviewer's opinion and experience of the film, it will definitely affect the reviewer's overall rating.