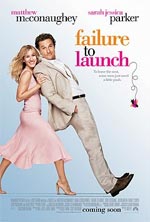 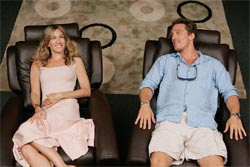 Tripp (Matthew McConaughey) has never been able to leave the nest. He's always had some reason or other, but now, his desperate parents have had enough. They hite the gorgeous and talented girl of his dreams (Sarah Jessica Parker) to get him to move out of the house.
(from FailureToLaunchMovie.com)

Ah, the romantic comedy. Formulaic always, but sometimes rewarding. Romantic comedies work much like any baking recipe where the result relies so heavily on just the right amount of each ingredient. When the romantic comedy relies too much on drama and not enough on comedy (Notting Hill), or relies too heavily on sexual material to direct the romantic element (Keeping The Faith), the film can feel problematic or even sloppy. Enter 2006's attempt Failure To Launch.

Director Tom Dey (who did a fine job on the Jackie Chan / Owen Wilson western vehicle Shanghai Noon) flounders when handed the promising premise of the predictably resulting Failure To Launch. From the get-go, Failure To Launch has every necessary ingredient and cliche the romantic comedy needs to fit the bill. While it's well-acted throughout, the film struggles with whether or not to pursue reality or camp, clearly siding with the latter by the film's wincingly cheesy resolution. The other problem is, even when the characters may have their charming or sweet moments, there's a sleezy feeling that's woven into the mix. McConaughey's Tripp won't commit to a relationship and brings his dates home to bed them in his parents' house when he feels the need to sever the ties. Other characters seem to base attraction strictly on looks or status as the usually sweet Zooey Deschanel (Elf, The Hitchhiker's Guide To The Galaxy) plays the foul-mouthed and rather shallow Kit. Same could be said for Justin Bartha who played the comedic relief in 2004's National Treasure, plays Ace who falls for Kit and they end up sleeping together on the first date. Of course, this is all meant to be very funny and cute, but it ends up merely turning the sweet to sour. 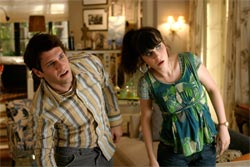 Is there much redeemable about Failure To Launch? I wouldn't presume to suggest much at all, but the film did offer some worthy laughs. The camaraderie between McConaughey and his fellow live-at-home buddies was often entertaining, as well as a few moments when nature resists Tripp's interactions or when he gets a chance to toy with his family when he realizes what's going on. Finally, somewhere deep within the tangles of the mess called Failure To Launch, is a message about being truthful and honest in relationships. But ultimately, Failure To Launch just seems to fail at about all it tries its hand at.

Although it offers a promising cast, a decent director, and a premise that had potential, Failure To Launch does just that. It may have its moments, but in the end, the film just seems too bogged down with racy material to be worth recommending. It's annoying that it seems so hard to find a good clean date movie today and Failure To Launch only makes it worse.

Sex/Nudity: Heavy. Tripp takes his date home and we see them under the covers with some sexual movement before his father walks in and interrupts them (his date pulls the sheet over herself so no nudity is seen); We see Tripp in his boxers and in a towel; Ace teases Tripp that he's only living at home to get "laid;" A woman shows off a tattoo that she has on her cleavage; Al asks Paula if she sleeps with her clients and she comments that she doesn't; Kit is apparently nude on her balcony when Tripp and Paula walk by her house. Although they see her, we don't see anything due to the trees in front of her; A vet comments that her job is but animals' "balls off;" It is implied that Tripp and Paula sleep together while in his parents' house; While Kit stands in front of a store clerk, she and Paula argue about Paula sleeping with Tripp. The conversation gets heated as Kit asks her if she had an orgasm, which causes the clerk to get flustered and drop something; Kit and Ace passionately kiss after he states he got his name from an "undescended testicle." They stop kissing when a bird's chirping interrupts them. Later we see them passionately kiss again and fall offscreen. Finally, Paula comes home to find the place in shambles, Kit in a robe, and Ace in his boxers, implying the two had slept together; Tripp comes into his parents house and thinks he hears them fooling around, but enters a room to find his father naked while tending to a fish tank. We then see several views of Tripp's father's bare rear end as he stands there naked. As he turns and walks around the room, different objects in the foreground block views of his frontal nudity; Ace said he installed webcams in his place and Kit asks if they were there the night before (and it's suggested he recordered their sex then); We see Tripp's parents under the covers implying the two are naked underneath them; Many other comments are made in the film that suggest sexual conduct, etc and contain innuendo.

Alcohol/Drugs: Many characters have drinks during the film (wine, beer, etc)

Blood/Gore: There is a little blood on Tripp's finger after being bitten by a creature

Violence: All for comedic purposes: several animals attack Tripp at different times; We see a paintball match; Kit and Ace shoot a mockingbird with a BB gun, etc Disclaimer: All reviews are based solely on the opinions of the reviewer. Most reviews are rated on how the reviewer enjoyed the film overall, not exclusively on content. However, if the content really affects the reviewer's opinion and experience of the film, it will definitely affect the reviewer's overall rating.