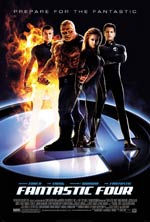 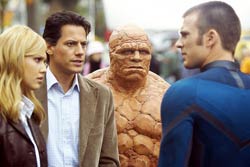 Marvel's first family of comic superheroes takes the world by storm as the longest running comic book series in history comes to the big screen. Reed Richards / Mr. Fantastic, who can elongate his body; Susan Storm / Invisible Woman, who not only can become invisible at will, but can render other objects invisibe; Johnny Storm / Human Torch, who can shoot fire from his finger tips and bend flame; and Ben Grimm / The Thing, a hideously misshapen monster with superhuman strength, together battle the evil Doctor Doom... (from FantasticFourMovie.com)

Regarded as the longest running comic book series in history, it may make one wonder what took Fantastic Four so long to get a modern retelling. Some may also wonder why the modest casting as well. Regardless, Fantastic Four brings the family of superheroes to the big screen in a fun and new way. But how does F4 compare with such films as Spider-Man or Batman Begins?

The film begins by introducing the team before their fateful accident in space that alters their bodies, giving them superpowers. Instead of getting right into the action, the story of Fantastic Four focuses primarily on the human side of the characters, how they become superheroes, and the trials that come with that. If anything, the film should have been called Fantastic Four Begins. However, the film never really goes into any great depth with the characters. You don't really know how the Storms or Reed Richards know Ben Grimm or how they got so close. You do, however, get a pretty sensitive look into Ben's struggles and personal losses with becoming The Thing. Alongside Michael Chiklis' performance as Ben/Thing, Chris Evans stands out as the most charismatic character in the bunch, Johnny Storm/Human Torch. In fact, some of the film's best moments are the banter between Ben and Johnny. And its the camaraderie between the four of them that pull the movie together. What would have made it stronger, however, would have perhaps been more backstory on each of the characters. But with the way Tim Story and the writers sculpted the movie, they already had made character development a major element, despite remaining rather thinly layered. 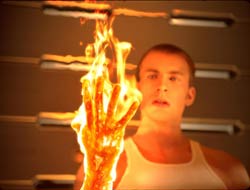 While some may find the film a little starved of action, and perhaps even a little slower-paced than one might expect, I appreciated what Story was trying to do with his film. Instead of all action and flare, Story opted for... well... story. And although it nowhere near scratches the surface that Batman Begins or Spider-Man explored thoroughly, it's nowhere near as superficial or empty as films like Daredevil or Batman and Robin. Although Ioan Gruffudd's Mr. Fantastic is rather self-conscious and subdued, he still remained charming and easily likable. Alba's Invisible Woman was probably the least memorable of the characters, but she was at least given a few good moments in the film.

Although action isn't the film's main focus, it did feel like it was building up to a grand finale, but it pretty much never came. While the finale is indeed an action segment that involves the foursome having to work as a team, it's feels like it's over shortly after it really gets started. Von Doom is an adequate villain, but nothing very memorable. Although Julian McMahon is an intense actor, he's rarely intense here. He just seems to be in the way considering how cliched his character was scribed. So many people are comparing the original film The Incredibles with Fantastic Four since the influence on the former by the latter is rather clear, but one can't help but compare the two. When that's done, Fantastic Four fails on almost every level in comparison. I haven't even touched on how poor Mr. Fantastic's effects looked, either...

The content was a mixed bag with a handful of mild profanity, even a few uses of blasphemy, and some moderate violence. The most surprising violent moment in the film involved Dr. Doom burning a hole through a victim that clearly left a seared, gaping void in the character's chest that was surprisingly gruesome. Some sensuality occurs as well, including the Invisible Woman attempts to strip to nothing to get by some security and accidentally becomes visible again when just in her underwear (in a moment that seemed oddly reminiscent of the Invisible Boy in Mystery Men).

So what is Fantastic Four's saving grace? F4 is entertaining throughout with an intriguing story. While some elements may feel a little stale, I was never bored during the course of the viewing. The Thing's inner torment, the charisma of Human Torch, and the tension between the Invisible Woman and Mr. Fantastic is interesting enough to carry the film. It's not a great movie by any definition, but it's a fun popcorn flick that I definitely felt was worth watching.

I enjoyed Fantastic Four, despite it's noticeably imperfect results. It's films like The Incredibles, Spider-Man, and Batman Begins that have greatly raised the bar on what to expect from superhero films that make Fantastic Four's flaws so obvious. But it's a fun adventure/comic book flick nontheless and one I definitely hope receives a sequel.

Sex/Nudity: Susan Storm shows a great deal of cleavage in her space suit; Johnny catches fire while snowboarding and ends up naked in a large pool of water made by melted snow from his heat (and he jokingly asks a girl to join him). We then see him join the others with just a woman's coat around his waist (he's naked otherwise since his clothes burned off); We see Ben's wife in a silk nightgown when she goes to meet him for the first time as The Thing (not realizing he's changed); Susan goes invisible to slip past some police to help Ben and starts stripping off her clothes (which stay visible when she is invisible). She accidentally becomes visible again when she's just in her bra and panties and quickly covers herself up. When she goes invisible again, we see the still visible lingerie come off. We don't see any nudity (since she is invisible) and later see her buttoning up her shirt after returning to her clothes and becoming visible again; Susan is chased by a crowd and she starts taking off her clothes to go invisible again (we don't see any nudity or anything explicit); Reed accidentally walks in on Susan in the bathroom after her shower and she's goes invisible and covers herself up when she sees him (but no nudity is seen); A reporter suggestively asks Reed if he can expand any part of his body to which Johnny replies that he always has thought Reed as "a little limp;" A blind woman in a bar starts feeling Thing's stoney figure to figure out what he looks like and Ben appears to enjoy it

Alcohol/Drugs: Some people drink in the film; Ben orders a drink in a bar; Reed and Susan drink at the dinner table, etc

Blood/Gore: We see somewhat of a closeup of Victor pulling a staple out of the side of his head without bloody results; Susan has a tiny bit of blood coming from her nose when she first uses her force field; Victor uses an electrical current to blast a hole through a man. We then briefly see a gory hole in the person's chest (with possible ribs shown slightly) before they fall to the ground; Victor has varying degrees of a metallic structure showing through his skin as the film progresses; We see a little more blood come from Susan's nose after she uses her force field.

Violence: Mostly comic-book style violence; A man chokes a man and throws him into a wall, killing him; Thing punches a tractor trailer to save a man and causes an accident scene; several characters fight, etc... Disclaimer: All reviews are based solely on the opinions of the reviewer. Most reviews are rated on how the reviewer enjoyed the film overall, not exclusively on content. However, if the content really affects the reviewer's opinion and experience of the film, it will definitely affect the reviewer's overall rating.