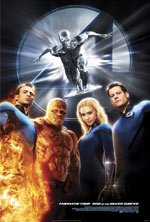 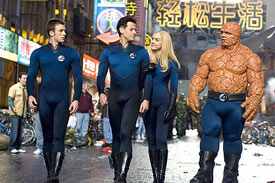 The Fantastic Four meet their greatest challenge yet as the enigmatic, intergalactic herald, The Silver Surfer, comes to Earth to prepare it for destruction. As the Silver Surfer races around the globe wreaking havoc, Reed, Sue, Johnny and Ben must unravel the mystery of the Silver Surfer and confront the surprising return of their mortal enemy, Dr. Doom, before all hope is lost. (from FantasticFourMovie.com)

In 2005, Fantastic Four made a subtle appearance on the big screen, failing to be much of a blockbuster, but was successful enough to warrant a sequel two years later. The original focused heavily on character development, forsaking action to spend time setuping up the story of the team's origin. The end result was more of what Sam Raimi was able to do with the Spider-Man films, but without such effective execution. The biggest problem was that, while the pieces worked, Fantastic Four seemed to lack as a whole. Still, its charm and heart keeps this franchise alive - enough, at least, to warrant a second installment, Fantastic Four: Rise Of The Silver Surfer.

Rise Of The Silver Surfer picks up roughly two years after the first film, displaying extreme changes for the foursome since we last saw them, including the fact they've become widely accepted and respected. But as Sue Storm (Invisible Woman) and Reed Richards (Mr. Fantastic) struggle to make their wedding happen, an alien with incredible powers, the titular character, The Silver Surfer, makes his way to Earth. One of the best things the sequel has going for it is more action involving the Fantastic Four team. The story-driven first film left room for only one climactic battle scene that seemed way too brief, so it was a real treat to get to see them in top form here.

The addition of the Silver Surfer to the story was a wise decision on the side of marketing the film. For a sequel too many could care less about within a sea of anticipated "threequels," it was a smart move to focus the story around such a popular character. However, with Rise... only running at an hour and a half, director Tim Story paces the film much quicker, and Surfer fans will likely be left wanting more. He's an intriguing nemesis for our heroes, and it seemed like it could have been developed more. Other characters were left even flatter. Actor Andre Braugher, who I felt brought a lot to his work in a film like Frequency, seemed out of place and wasted here as General Hager. Hager seemed at odds with the Fantastic Four with little explanation. It felt just like a rather forced, underdeveloped way to allow some other plot elements to be included. On the bright side, Julian McMahon returned as Von Doom, which was a nice little surprise. While his involvement is a bit too contrived for the film's own good, his intense performance as the villain -- who's creepier when McMahon isn't even wearing the costume -- makes most of the scenes involving him especially fun to watch. 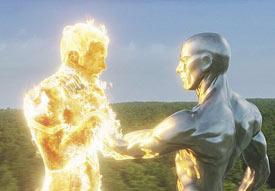 Nitpicks aside, Fantastic Four: Rise Of The Silver Surfer is a more engaging film than its predecessor. There is still plenty of time well spent on each main character, developing their stories a little further, but a lot more action unfolds this time around. The Silver Surfer's effects are bedazzling, and his interactions with the environment as well as the Fantastic Four make for some great moments in the movie. The climactic battle at the end is unique and one of the most fun to watch of a superhero film in awhile (specifically because of a certain little "twist" or "gimmick" used). The humor, especially the teasing between Johnny and The Thing, returns as well, keeping the mood lighthearted. Chris Evans stands out as Johnny Storm while Amazing Grace's Ioan Gruffudd is great once again as the brilliant-but-naive scientist, Reed. Sadly, the worst special effects in Rise... are actually those used for Mr. Fantastic's "stretchy" scenes. From dancing in a club to even just reaching for something, it never looks realistic or believable, while, on the other hand, every time Johnny bursts into flames, it's an impressive sight.

The PG rating, considering the first film's PG-13 rating, may be a surprise to some. Basically, the sexual innuendo and references of the first one were toned down a bit, as well as the graphic nature of the violence. Rise... still has some off-color jokes, but they aren't as frequent or obvious. The action is increased, but it's never quite as gruesome as some of the previous material. Still, some of the content will be too much for younger viewers, especially with how menacing Von Doom looks bearing metallic scars beneath a dark, ominous cloak. On top of that, we see a person hit with an energy blast that seems to simultaneously turn them to stone and shatter half of their body off. Finally, although we don't see the impact, we do see a character stabbed by a rod and then see it sticking out of them. So content like that, coupled with some adult humor, presents the need for some caution before taking the family to see it.

Fantastic Four: Rise Of The Silver Surfer is an improvement on the first film in its entertainment value, but its abbreviated running time gives it a bit of a rushed feel at certain moments. Entertaining from start to finish, but perhaps a bit too intense and adult for a family-friendly PG film, the Fantastic Four series still has some room for improvement despite the added help from the Silver Surfer. Although Story does his best with what's at hand, perhaps another production team and a stronger script can give the Fantastic Four further rise to greatness.

Sex/Nudity: Johnny asks Thing in a round about way how he sleeps with Alicia. Thing gets angry and Johnny jokes that he just wants to know what happened if he ever heard that Alicia died in a rock slide; Sue's wedding dress is low cut and shows cleavage; A lot of people are shown at a bachelor's party and wear low cut, cleavage-revealing attire and are shown dancing; Thinking about having someone special, Johnny accidentally makes Thing's relationship with Alicia sound bad so he overcompensates by ranting on about how hot she is and Thing stops him before he finishes a thought about all guys would want to be with her; Sue's clothes burn up and we see her lying on the street naked, but her positioning and people around her block all signs of nudity, so we just see her arms and shoulders and part of her lower legs (but people take photos, which is played for laughs)

Alcohol/Drugs: Some people are drinking at a bar at a party and also around the party

Blood/Gore: We see a shadowed view of Von Doom's face after he's removed his mask and can make out lots of scarring and metallic scars (it's clearly visible on his neck); We see his hand as metallic scars where there's torn away flesh quickly heal up; Sue has a drop of blood running from her nose; Sue has a slightly bloody cut on her forehead; A man is hit with a blast and he partially breaks apart as if her were made of stone. We then see his partial remains in two different instances

Violence: Heavy - we see many people on a ferris wheel as the Fantastic 4 try to keep it from falling into a river; We hear of a being that destroys planets eight days after arriving at them; a helicopter loses control and the team try to stop it from crashing as it begins tearing through a crowd, tossing chairs, etc; Von Doom throws a person who unwelds his mask; Some nonlethal hand-to-hand violence, along with energy blasts from different characters; A person is impaled by a rod and kills them (but it's not bloody although we do see it sticking out of them) Disclaimer: All reviews are based solely on the opinions of the reviewer. Most reviews are rated on how the reviewer enjoyed the film overall, not exclusively on content. However, if the content really affects the reviewer's opinion and experience of the film, it will definitely affect the reviewer's overall rating.