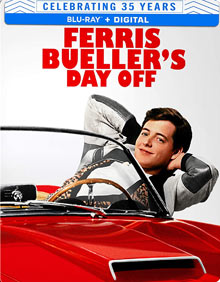 A high school wise guy is determined to have a day off from school, despite what the Principal thinks of that. (from IMDb)

If asked to think of iconic 80's comedies, there's a good chance Ferris Bueller's Day Off will come to mind. The John Hughes classic revolves around a kid in high school who decides to skip the full day by faking being sick. He dupes his parents (who seem sweet) into leaving him home as they go to work, and he enlists the companionship of two of his closest friends - his girlfriend Sloane Peterson and his best friend Cameron Frye. But this is his ninth school absence this year, which has principal Ed Rooney skeptical about Ferris' condition. What unfolds is a day of fun, mischief, relaxation, deception and life lessons. 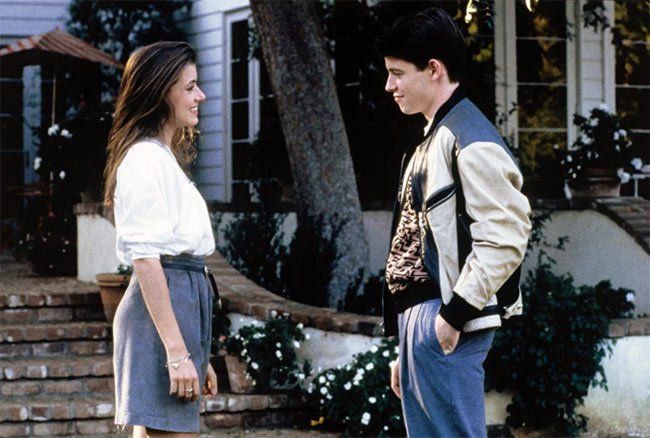 As a kid, I think the PG-13 rating of Ferris Bueller's Day Off kept me from being allowed to see it, so I never actually got around to seeing it till I was much older. I honestly can't remember when I eventually did first see it. (It was probably on TV.) But when I did finally see Ferris Bueller's Day Off, I wasn't quite as swept away in the fun and antics of Ferris Bueller that so many seemed to have been. If anything, I probably felt like I was on the outside of an inside joke. And, 35 years since its release, with it still having a faithful following, after rewatching it, I still get a little bit of that feeling (but not nearly as much). Perhaps it's the way Ferris does things - like force his best friend Cameron to let them borrow his dad's expensive, rare, and highly valued car to go riding around in (and "break" his girlfriend out of school for the day under the false pretenses that her grandmother died), or his blatant deception of his family (and even classmates) for the sake of his own good time. And, perhaps it's because now I'm a parent myself and the father of a pre-teen boy, and it makes me shudder at thinking he'd do pretty much anything that Ferris does in this movie. But, removing myself from that - and trying to watch it as mere entertainment - Ferris Bueller's Day Off is certainly a mostly light and enjoyable school-skipping romp through the streets of Chicago.

Matthew Broderick is pretty great in the role of Ferris Bueller. I've never thought of him as a particularly strong or standout actor, but he does a solid job embodying the likable, albeit michievous, slacker. It's the kind of role that has to be played by just the right person, otherwise his antics would be much tougher for the viewer to accept and process. He's charming and displays a hint of a sensitive side, but for the most part, he seems to just think of himself first above even his closest friends. There isn't a huge character arc for Bueller here either, with the only real arcs in the movie being his sister Jeanie (played by Jennifer Grey), and his friend Cameron (Alan Ruck), the latter of which seems to grow a spine for the first time in his life throughout the course of the day. Although Bueller probably went to sleep that night pleased with himself and the growth he saw in others, he's still kind of a selfish little jerk. He does torment his school's principal, but the movie paints the man as such a questionable character himself that you're doing anything but rooting for the guy to catch Ferris. By the time he crawls onto a school bus in tattered, bloodied clothes, there's a satisfying feeling of seeing the man at his lowest point. Ironically, Bueller's bad behavior never seems to result in anything negative for him, and he ends the movie as a sort of hero to every teen who wishes they could get the better of the adults around them. (A very "us versus them" mentality.) 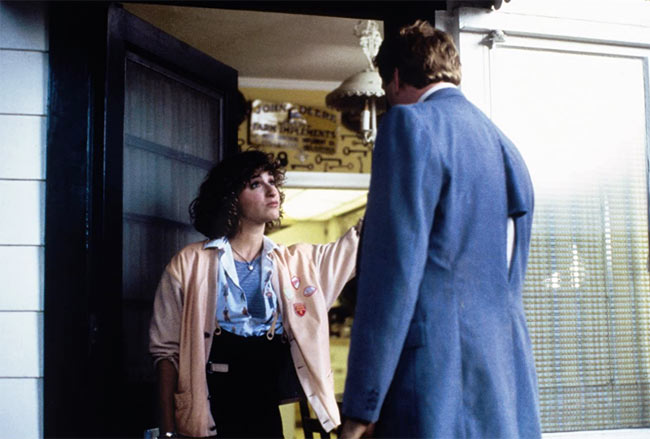 The content for Ferris Bueller's Day Off is surprisingly rough - especially as a movie aimed at teens. It adds to the rebellious nature of the movie, but definitely makes it tougher to enjoy. Sexual content is sparse but mostly present as verbal references. We do get a brief look at Ferris drawing a very unrealistic and pixelated picture of a nude woman on his computer (This was 1986, after all, so computer technology was quite limited). There's then a scene later while the three friends are swimming and Sloane appears to be wearing just a slip as a top, and it's somewhat revealing (but not altogether explicit). Profanity is frequent, with Rooney using the "F" word once, a stripper gram reciting a phrase that suggests it'd end in another use of the word (but she's interrupted before she can; we just see a buxom woman dressed as a nurse at the door when Ferris' sister answers it), there's 25 uses of the "S" word, quite a bit of blasphemy, and an assortment of other offensive words and phrases. Violence is mostly comedic, but it's also mostly involving principal Rooney trying to get into the Bueller home and getting attacked by their dog--or Ferris' sister, Jeanie. 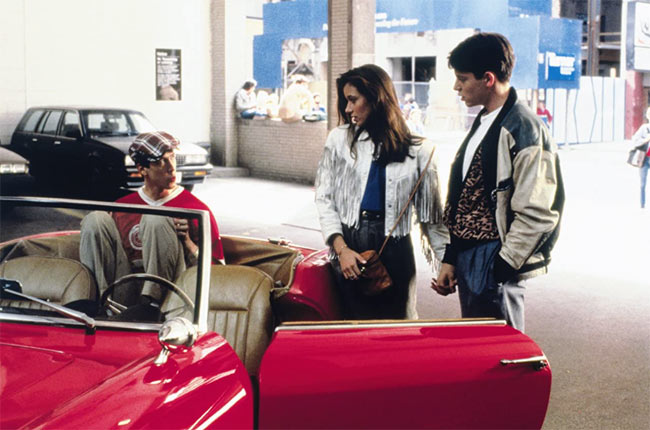 For its 35th Anniversary, Paramount has re-released the film on Blu-Ray in a collector's steelbook case. It's certainly a nice repackaging, but it doesn't offer anything new on the disc. There is a digital copy included, however, which you can redeem at iTunes or VUDU (but it's not compatible with Movies Anywhere), which also contains the Blu-Ray's bonus features. The picture quality is pretty good, but you can occasionally still see some dust and specks on the film (though not often), and it surprises me that Paramount has yet to give it the 4K restoration treatment, as they've been doing that with so many other films lately. Perhaps fans can expect an updated 4K release sometime soon.

While it has its moments, and is most enjoyable when not taken seriously, Ferris Bueller's Day Off definitely isn't one of my favorite films of the 1980's. I think the strong and memorable performances from the cast, and the often lighthearted nature of the movie, is what has helped it endure for these 35 years. However, it is still a rather irreverent comedy and one that has enough going against it to not earn an outright recommendation.


In celebration of the film’s 35th anniversary, Paramount Home Entertainment will release a FERRIS BUELLER’S DAY OFF Limited-Edition Blu-ray Steelbook on June 8, 2021, which includes access to a digital copy of the film, as well as the following legacy bonus content:

Sex/Nudity: We briefly see a poster on Ferris' bedroom wall of a man and woman making out. It's hard to tell, but it appears the woman is naked (seen from the side in an embrace); We briefly see Ferris showering from the chest up and then wrapped in a towel afterwards; Jeanie refers to Ferris as a trouser snake; Grace lists off high school cliques and mentions sluts; We briefly see Ferris drawing a pixelated naked woman on his computer in his room; About his father, Cameron says "The man could squash my nuts into oblivion"; When Ferris, masquerading as her father, picks up Sloane from school, she walks up to him as principal Rooney is watching. Ferris says to her, "How about a kiss for daddy?" and they share a very passionate kiss. Rooney is visibly disgusted as he remarks to himself "So that's how it is in that family"; We see Sloane and Ferris making out in front of an art display in the museum; A taxi carrying Ferris' dad pulls up next to the car that Ferris, Sloane and Cameron in. The guys duck down on the floor while Sloane makes flirting looks at Ferris' dad. Ferris then tickles Sloane's legs and we see her giggling and laughing from the waist up, which his dad also sees, which makes it look like Sloane might be pleasuring herself; We see a stripper gram nurse at the Bueller's front door when Jeanie answers it (the woman's tight nurse outfit reveals cleavage). Jeanie slams the door in their faces, cutting off what she's saying as she was about to say that she's the nurse who likes to-- (it would have been the "F" word); Ferris, in his talk to the camera, remarks that Cameron will marry the first person he lays; We see Sloane in a skimpy wet slip as she's swimming in a pool with the guys; A teen in the police station talking to Jeanie tells her she wears too much eye makeup. He then adds that people think his sister is a whore for wearing too much eye makeup. Jeanie tells him to "blow" himself. He then looks down at his own crotch smirking; We then see Jeanie and this teen making out in the police station; While running home, Ferris passes two girls sunbathing in bikinis. He then stops and goes back to introduce himself to them.

Alcohol/Drugs: A guy asks if Jeanie is in the police station for drugs.

Violence: Cameron angrily hits his car seat; While he's on the phone, Ferris hits and kicks Cameron who drops his phone; Cameron smacks Ferris on the head; Jeanie smacks a can for taking donations out of a student's hand; Cameron throws a matchbook at Ferris; A girl spits soda through a straw into Rooneys face; A dog chases Rooney; Jeanie kicks Ed in the face several times; Cameron angirly kicks a car. It then car goes off the edge of an elevated garage and crashes into the woods below; Sitting by himself by the side of a pool, Cameron leans forward and falls into the water, sinking to the bottom. Ferris panics, jumps in and rescues Cameron. Cameron smiles that he was faking drowning himself; A dog attacks Rooney outside the Bueller house; We see Rooney hobbling along the side of the road bloodied and in tattered clothes. Disclaimer: All reviews are based solely on the opinions of the reviewer. Most reviews are rated on how the reviewer enjoyed the film overall, not exclusively on content. However, if the content really affects the reviewer's opinion and experience of the film, it will definitely affect the reviewer's overall rating.