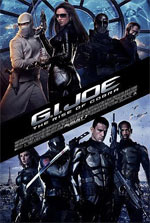 G.I. Joe: The Rise Of Cobra

Paramount Pictures and Hasbro, whose previous collaboration was the worldwide blockbuster "Transformers," join forces with Spyglass Entertainment for another extraordinary action-adventure "G.I. Joe: The Rise of Cobra." From the Egyptian desert to deep below the polar ice caps, the elite G.I. JOE team uses the latest in next-generation spy and military equipment to fight the corrupt arms dealer Destro and the growing threat of the mysterious Cobra organization to prevent them from plunging the world into chaos. "G.I. Joe: The Rise of Cobra." is directed by Stephen Sommers ("The Mummy," "The Mummy Returns"). (from MovieWeb.com)

With the success of 2007's Transformers live action movie, it's no surprise that another Hasbro brand, G.I. Joe would finally get a live action movie treatment. I remember being somewhere in my pre-teens and seeing live action G.I. Joe toy commercials that seemed to hint at the idea of a live action movie coming to light. To my disappointment, and to the disappointment of many children at the time, no such movie materialized. Like Transformers, G.I. Joe was given the animated movie treatment in 1987 in a straight-to-video form, but it suffered some of the similar slash-n-burn rebooting of the series that the giant robot franchise also received.

For a director that knows nothing about restraint or subtlety, I suppose the G.I. Joe franchise is a perfect match. Stephen Sommers shot to fame with the success of his 1999 film The Mummy, starring Brendan Fraser and Arnold Vosloo, which spawned his 2001 follow-up, The Mummy Returns. In the film's sequel, Sommers didn't hold back and opted for "bigger" in hopes it would be better. It was anything but better and this lust for excess also brought down the 2004 Hugh Jackman vehicle Van Helsing. As far as I and a lot of summer blockbuster movie fans were concerned, Sommers was a one-hit-wonder. And with a blase trailer issued for his latest venture, G.I. Joe: The Rise Of Cobra, no one really had much faith that Sommers could deliver a credible film. The end result? G.I. Joe: The Rise Of Cobra is everything you might expect from Sommers, but more entertaining than one would assume.

First off, for those reading this and thinking, "So the Transformers films have been anything but kid friendly, how does G.I. Joe: The Rise Of Cobra measure up?" Sadly, it's about the same. Both franchises seem targeted for people my age who grew up on the cartoons and the toys, and both play to the inner child still residing within us late-twenty-somethings/ early-thirty "man-boys." G.I. Joe: The Rise Of Cobra is an adrenaline rush and action film that's light on story and believability, but heavy on action, destruction, and eye candy. And while the latter may be something that both Transformers films thrive on immensely, G.I. Joe: The Rise Of Cobra pales in comparison when it comes to quality. With much of the action and scenery depending on special effects and CGI work, it's more than apparent that ILM didn't work on G.I. Joe like it did for Transformers, and this helps keep G.I. Joe feeling cheesier than it needed to be at points. The other moments that leant to the cheese factor, however, are some of the dialog, including a few love triangle plot elements that the story didn't need, and some corny attempts at humor (Really? We needed a Wayans brother in this for comic relief? No, I don't think so).

The content sends up a dramatic red flag when it comes to violence. While the Transformers films weren't very graphic or gory, G.I. Joe: The Rise Of Cobra does have its moments that could traumatize the younger kids and cause even some older folks to want to look away. Despite more than several characters walking away with bloody heads at different points in the movie, we see a shirtless man endure several bloody sword cuts, the disfigured face of someone scarred by a blast, a person's head covered in bloody burn marks (with their hair burnt off), a person screaming as their face starts to deteriorate, and finally a bloody-faced corpse that gruesomely begins to rapidly decompose before the Joes' very eyes. It's stuff like this that aim this film at the adults much more so than children, even though the film certainly has Hasbro aiming a toyline at the young ones regardless. On top of the bloody/gory moments, we see lots of cut-away violence that includes dismemberments and, especially, impalements. We'll see a sword go through a laptop sort of gadget in front of someone (from behind, so we don't see it sticking through the person directly), or a throwing star sticking out of a Viper's helmet eye-hole. Stuff like that that isn't entirely subtle, but indirectly shows gruesome violence. There's also a hearty helping of language included. Five prominent "s" words are featured, as well as a sprinkling of "h*ll" and "d*mn," a pair of "S.O.B," as well as other colorful obscenities. In the end, you wonder why this was necessary, especially when the film embraces an overall campy/lighthearted approach.

As far as story and overall film quality? As a fan of G.I. Joe as a kid, who collected the figures passionately and followed the TV show, I did enjoy the sort of Saturday morning cartoon for adults feel of G.I. Joe: The Rise Of Cobra, even if Sommers went over the top with junky content at times (the language especially felt out of place). And since the cartoon show never showed characters dying, but always had them narrowly escape, it seemed pretty drastic for there to be excessive fatalities shown in The Rise Of Cobra. It was especially fun to see characters like Snake Eyes and Storm Shadow come to life on the big screen (and both handled fairly well), but I was ultimately disappointed by the handling of characters like Duke, Ripcord, and especially Cobra Commander. I did appreciate the setups for Destro and Zartan and even a nod to Dr. Mindbender (unrecognizably played by Kevin J. O'Connor who also appeared in the first Mummy film). Dennis Quaid brought a tad of star power to the film as the beloved Joe leader, General Hawk, and he handled the character rather well. Since this story is meant to just set everything up for future films, I'm really hoping we'll get to see characters like Flint, Beachhead, Firefly, Barbecue, Roadblock, Dusty, and Shipwreck in coming installments. I can't say I'm entirely pleased with how they wrapped up a few characters rather prematurely in this origin story, so hopefully they'll either remedy that as well, or just use it to be able to focus more on future characters instead. The only other truly unnecessary approach here was also one of the problems for this Summer's Wolverine origin flick. In The Rise Of Cobra, we're treated to several flashback moments in order to establish some character development, and while it works for moments with Duke for the most part, the flashbacks to Snake Eyes and Storm Shadow as children are a bit iffy, even though the moments with Wolverine as a child were much much worse.

I have to admit, I expected a trainwreck with G.I. Joe: The Rise Of Cobra and instead was met with more of a fender bender with a few major issues thrown in for good measure (like the content problems). As purely entertainment and nothing more, the first installment in the G.I. Joe franchise is a pretty good start and I'm very curious to see where it goes from here. It's certainly not as well done as the 2007 Transformers or this year's Star Trek reboot, but as another action movie inspired by toys and a cartoon series, G.I. Joe: The Rise Of Cobra makes for a pretty fun time at the movies. But take my advice - this one is not for the kiddies.

Sex/Nudity: Storm Shadow tells Baroness that the Baron is not allowed to touch her and she makes a comment about the Baron - who is also her husband - having to touch her (meaning sexually, but it's handled in a very non-obvious way); We see Baroness and McCullen passionately kiss; Scarlett shows some cleavage in different scenes; Baroness shows pronounced cleavage in several scenes

Alcohol/Drugs: There may be some wine or drinks in a restaurant/banquet scene

Blood/Gore: Duke has some small scars on his face; We see a flashback that shows blood on Duke's face. We then see a different part of the flashback with some bloody scabs on his face; After a car explosion, we see a dead body with blood all over the person's face. We then see the body again later and a vivid shot of Breaker jabbing two rods into the dead man's head. The body then convulses and the face begins to mutate and decompose rapidly in a gory way until it's nothing but dust; We see several needles enter a man's face. His face then contorts and he convulses a bit (but is not dead); A man removes his mask and wig to reveal lots of scarring and burn tissue all over his face; A snake bites a man's arm and then we see a close up of the bloody bite marks. The camera zooms into the wound and digitally into the blood stream to show nanites fighting snake venom. When the camera zooms out of the bite, we see snake venom ooze out of the bloody holes; A woman has blood on her head after an accident; A man has some blood on his chest; A bandage on Duke shows a tiny bit of blood; We see a flashback when two kids fight and one of them has a bloody nose and some blood on his head; During a sword fight, we see a man's cut clothing and some blood through the torn suit. He then rips off his shirt and we see multiple bloody gashes on his body for the rest of the fight; We see a laser sight appear on a man's head and when a gun is fired on him, the head disappears as the body quickly hits the ground; We see blood on a knife that Storm Shadow used to stab someone; Many times we see what looks like a Cobra symbol burned into a person's neck; A man's head gets severely burned and we then see their face covered in blood and burn marks. Their neck is then injected with something that covers their skin; We see several non-gory impalings including, but not limited to: a sword through a person through an electronic device, a forklift through a person through a pillar; throwing stars into the mask openings of Vipers; sudden dismemberments via sword but done quickly and off-camera

Violence: Everything above mentioned in Blood/Gore plus explosions of vehicles, the Eiffel Tower destroyed by nanites; vehicles crashing killing their passengers; car accidents and automobiles being tossed into the air, exploding, and/or crashing; sword fighting (some lethal); shooting (some lethal); and other action-movie/military violence Disclaimer: All reviews are based solely on the opinions of the reviewer. Most reviews are rated on how the reviewer enjoyed the film overall, not exclusively on content. However, if the content really affects the reviewer's opinion and experience of the film, it will definitely affect the reviewer's overall rating.