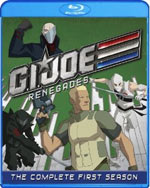 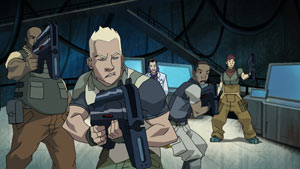 When a spy mission against Cobra Industries goes awry, a group of young G.I. JOE team members is forced to hit the road as fugitives. Now the team members - DUKE, SCARLETT, ROADBLOCK, TUNNEL RAT, RIPCORD, BREAKER and SNAKE EYES - must use their wits and elite training to prove their innocence to the world before being caught by the authorities, the COBRA organization or, worse yet, another elite military team called the Falcons.

Earlier this summer, I had the opportunity to review the 2010/2011 cartoon series, G.I. Joe Renegades: Season 1, Volume 1 for Shout! Factory. I'd grown up on the G.I. Joe: A Real American Hero cartoon show from the 80's and have found in my adulthood that the show has held up [very] surprisingly well. Renegades was an updated, fresh new take on the series, introducing familiar characters with new designs and backstories. In June, Shout! Factory's "Volume 1" set included roughly the first half of the first season, serving as merely a tease for the show. At the same time they're releasing "Volume 2," the TV-on-DVD company is releasing the full season in one set for the first time on Blu-Ray. This will be a review of the full season. For my previous, first impression of the first half of Season 1, please click here. 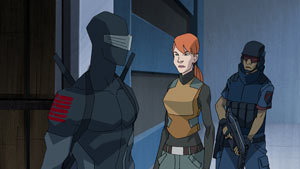 After watching all of Season 1 of G.I. Joe: Renegades (and the fact that it's been quite some time since this show has aired and there still is no sign of a Season 2, makes me wonder why this set isn't called "The Complete Series"), I find it pointless that the series was ever released in two volumes on DVD. The show plays out like a serial, with each episode continuing from the next, collectively serving as a prequel to the world of G.I. Joe that fans otherwise know about. Throughout the Joes' journey, we meet new characters that turn out to be somewhat familiar--whether by name or role--and their new identities play out with mixed results. However, looking at the season as a whole, the end result is actually a relatively impressive feat. The writing is pretty good, especially for a cartoon show. And not only is arc of the season unique, creative, and different, but there are countless nods to A Real American Hero and the G.I. Joe lore from episode to episode. It's enough to make any G.I. Joe nerd smile.

However, I think it'd be easier to write a small book on everything I didn't like about the show, but most of it would stem from my childhood attachment to the 80s series which first introduced almost all of these characters. While I loved little nods to the series--like a master plot about the M.A.S.S. device (which I believe was in the A Real American Hero pilot), Destro's red collar making its only appearance in the season finale, the presence of Battle Android Troopers (affectionally known as B.A.T.s), and merely the appearances of characters like Tomax and Xamot and Shipwreck--the way they decided to reimagine some characters really irritates me. I touched on this in my last review, but I need to highlight it here again: Reimagining Dr. Mindbender from a monacle-wearing, sophisticated mastermind to a popped-collar-polo-shirt-wearing, whiny, arrogant, sarcastic frat boy is inexcusable. The Renegades version isn't even the "love to hate" kind of villain; he's just one hundred percent annoying. It's the equivalent of being stuck in traffic for eight hours straight while listening to nails being dragged across a chalkboard. And by the time he uses the term "epic fail" a second time in his snarky voice, I just wanted to puke. The other drawback to this version of the show is that Cobra Commander isn't really fun anymore. He was a good mix of ruthless, funny, and likable in the original series, and he appeared in just about every episode. In Renegades, he's used sparingly, but is mostly pretty dry, personality wise. Meanwhile, a lot of favorite characters from A Real American Hero only get one-episode appearances here. It's a way of setting up the world of the Joes, but it just teases fans of the original series. Also, some of these characters are pretty cool, while others are just embarrassing. One of the worst Joe redesigns is Shipwreck, who goes from a pretty cool tough guy from the original series to looking like Haddock from The Adventures of Tin Tin. To make matters worse, the Joes meet him on his ship, which he's named Courtney, and he refers to the vessel as such incessantly throughout his episode's 22 minutes. It's silly, and it sure doesn't beat Shipwreck's original introduction which, if my memory serves me correctly, involves a bar fight. 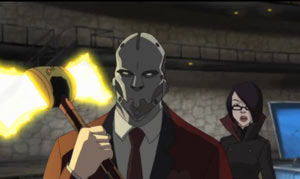 The animation is a lot more stylized in Renegades, sitting somewhere between a U.S. and anime approach. Also, it's clear that there's a mix of hand-drawn and CG animation (unless all of it is CG but made to look like it's hand-drawn). The CG effects bring to life some of the vehicles and action in ways that conventional hand-drawn animation cannot, so it works pretty well in the series. The music is also pretty modern, forsaking any kind of lyrical theme song like the original, but I admit I do miss the cheesy and patriotic 80s theme. I also found the Renegades theme to get old real, real fast... to the point where I hated hearing any part of it (the woodwind intro is especially grating).

The content of the show is certainly more modern than what I grew up with. Bullets had to be replaced with lasers in the original series as to tone down the violence, and no one ever died in the fire fight. In Renegades, the violence is a bit more defined, and it's implied that characters can and do die. In the first volume of the DVDs, we see a major Joe character die, but once you view the season in its entirety, you learn that the character actually lived. We see some villains get ambiguous endings that could mean their death or still leave room for their return. But otherwise, a lot of action involves swords, shootings, and miscellaneous henchman meeting a probable end at the mercy of a throwing star or something. Also, there are these large, shape-shifting monster vipers called "Bio Vipers" that allow the violence to have them shot up (including holes blown through them), sliced up, dismembered, etc. It's not really gory, but it may be surprisingly violent to some (One episode shows the goo of a Bio Viper pouring through a human's facial orifices and consuming them). With that said, the show is probably intended for pre-teens and young teens, and therefore best suitable for that age group. Otherwise, there is no profanity or sensual content included that parents need to worry about.

For viewers like myself who grew up with the original TV show and likely now have kids themselves these days, G.I. Joe: Renegades is a sign of the times and the changes that come with it. But with the uncanny similarities to The A-Team (in the first half of the season, especially) and the modernizing of beloved characters, it may be a hard pill for original fans to swallow. However, G.I. Joe: Renegades is not really for the original fans (although there is plenty about it that references the 1980s series), and as-is, it's a pretty decent good versus evil action/adventure show for growing viewers. Getting just Volume 1 is really only getting half of the story, so be sure to either pick up both DVD volumes or the whole season on Blu-Ray disc. The show looks fabulous in HD, so that would be your best option. While there's no word of plans for any kind of "Season 2" for the show, it ends in a way that signals that a Season 2 would be less about renegade Joes and more about Cobra's retaliation against the whole team. That sounds like a story I'd be interested in watching, but even if it never happens, Renegades stands on its own as a pretty good story.

Where the Volume 1 DVD set didn't offer a single special feature, the Blu-Ray set actually does offer a couple. There is a commentary for the second half of the season finale, a great 11-minute promo for the show, and "A Tribute to Clement Sauve," the artist who designed the Joe characters for the show and unfortunately passed away last year.

- John DiBiase (reviewed: 9/25/12) Disclaimer: All reviews are based solely on the opinions of the reviewer. Most reviews are rated on how the reviewer enjoyed the film overall, not exclusively on content. However, if the content really affects the reviewer's opinion and experience of the film, it will definitely affect the reviewer's overall rating.