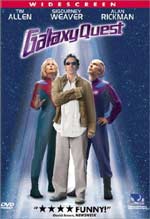 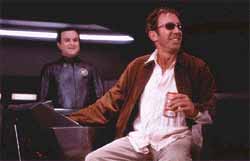 The cast of the hit TV show, now off the air, Galaxy Quest, are only doing conventions now. They don't get along well and their "captain," Jason Nesmith (Tim Allen) is arrogant and thinks everyone loves him when that is not the case. When Nesmith is confronted by 4 aliens who appear to be fans at a convention, his life changes forever. They take him to their ship and Nesmith doesn't realize this till he is transported back to earth. He tries to convince his old friends that it was real and they blow him off. But when the aliens return for more help, the crew decides to join Nesmith thinking it's another "job," but are in for a big surprise...

Confession time... I... I... I used to... watch... Star Trek. Ok, it's out in the open. I feel a little better now. Yes, I went through my Next Generation phase, and my Deep Space Nine phase, but luckily grew out of it before I got into the really frustrating and occasionally extremely ridiculous Voyager. But I still go to see the new Trek movies when they come out but no longer watch the shows. So when I heard about Galaxy Quest, and I learned about the cast, I knew I had to see this movie. I expected a semi-campy Star Trek spoof, but left the theater with another movie that will have to be in my permanent collection.

Driven by a great cast, jokes attacking Star Trek stereotypes, and a unique plot, Galaxy Quest is the perfect end to a year with some great movies (and some that just remind us how sick our society is). But for any sci-fi fan or Star Trek fan, this film is a definite must-see. 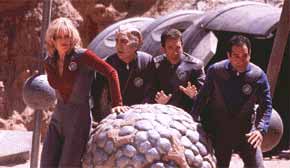 The characters were great. Sam Rockwell played Guy, one of the best of the crew, who was the "sixth member" and originally on the show lasted 5 minutes before getting killed. Guy was paranoid through the whole film that he had to die because he was the "extra" guy. Stereotypical for any Star Trek episode, the ensign or extra member of the landing party alsmost always has to die. This was a fantastic and very enjoyable target that the producers picked.

Tim Allen's job as Nesmith was great. He actually made a pretty good sci-fi captain action hero, and was very reminiscent of an older William Shatner aka Captain Kirk from the original series. This was especiall evident in the battle scene with the rock creature on one of the planets. Sigourney Weaver was great as Gwen. She played the stereotypical female who was just there for her looks. Alan Rickman was fanatastic as Alexander, who played a spock-like alien on the show, but in real life hated the show and wanted nothing to do with it ever again.

The characters were great and I was finding myself not wanting the movie to end! Only major flaws in the film was the cursing, although minor, wasn't necessary, and the sexual references, which weren't even really that funny and should have been left out.

In summary, the movie was great. It isn't a family movie due to violence, minor innuendo, and minor swearing, but it is a good movie for older sci-fi fans. One of the best movies of the season, and a recommendation over the abundance of R-rated films currently out. Yet, still, if you have any questions or comments about the film before you see it, feel free to contact me.

Sex/Nudity: Few minor references are made. Gwen wears revealing clothing throughout the film. In one instance, Laliari (in female, human form) and Kwan look romantically at each other and then start making out. Tentacles come out of her and begin rubbing/carressing Kwan and they fall to the floor together. Guy, who's observing this, remarks, "Oh! That's not right!" (but we don't see exactly what he's seeing).

Alcohol/Drugs: Nesmith gets drunk, Gwen has a drink, and there is 1 reference to a pub

Blood/Gore: We see Sarris with one of his former crewmember's alien heads on a pole (just looks like a mask on a stick). When a failed attempt to beam a creature on board turns the creature inside out, we see a gooey and gory mess, with goo and guts squirting out before it explodes and sends its innards across the room. After being beaten up by a giant rock monster, Nesmith's mouth has a little bit of blood on it and he has some bloody scrapes on his body. Mathesar has blisters on his face after Sarris tortured him (not entirely seen). An alien lands on Sarris' spaceship's "windshield," leaving a green blood splat on it; An alien has a non-bloody hole in its uniform after its been shot. Gwen has a scrape on her exposed shoulder.

Violence: People fighting, punching, shooting, explosions, etc. Disclaimer: All reviews are based solely on the opinions of the reviewer. Most reviews are rated on how the reviewer enjoyed the film overall, not exclusively on content. However, if the content really affects the reviewer's opinion and experience of the film, it will definitely affect the reviewer's overall rating.