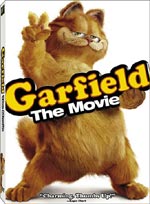 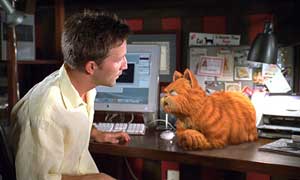 Garfield is a fat, lazy orange cat who lives with his owner Jon Arbuckle (Breckin Meyer) and is happy to have his run of the house. When Jon brings home a new dog named Odie, Garfield is no longer the center of his owner's attention. When Odie runs away as a result of a mistake on Garfield's part, the fat cat sets out through the city of New York in search of the missing canine.

Anyone who knows me, knows I'm unashamedly a diehard fan of Garfield. So is this a biased review then? Yes and no. As a fan since I was very little, I can compare the big screen version to the well-known comic strip and cartoon. Garfield was created by cartoonist Jim Davis in 1978 and has grown to become a worldwide monopoly. From the daily newspaper strip, Garfield appeared in several TV specials his own TV series Garfield & Friends, and finally, in his 26th year, Garfield hits the big screen for the very first time.

Garfield: The Movie blends computer animation technology with live action footage a la the Scooby Doo films. The only real problem with this is, is the filmmakers' choice to only animate Garfield himself. All of the other animal characters -- including Odie, Nermal, and Arlene -- are merely real life animals with animated mouths for when they speak. And with that lovable dog Odie playing such a large part in the series and the film, you have to wonder what in the world they were thinking to make Odie a REAL dog. But with the main focus of the movie truly and unmistakably being all about Garfield, it still seems to work for the most part. But the real animals rob the feel of the original cartoon characters from the film, creating an almost all-new world for Garfield to exist in. And while some might claim that Garfield sticks out TOO much as being the only animated animal in the film, it almost makes sense in the end due to Garfield's one-of-a-kind character. We can almost expect him to stand out like that.

So how does the big screen Garfield -- brilliantly voiced by the ever-talented Bill Murray -- match up to who we've come to know in the strip and show? His sarcasm, mischievous behavior and masked soft side all appear here in this Garfield with very little of anything unexpected emerging. The story closely resembles the early 80's TV special Here Comes Garfield, the first time the fat tabby cat was ever animated on the small screen. In that show, Jon takes in Odie much to Garfield's dismay and when a dog catcher seizes the new canine companion, Garfield sets out to find him and bring him back. For Garfield: The Movie, the basic storyline remains, with the exception of the veterinarian Liz being given a key role and a new villain is introduced who kidnaps Odie to use on a TV show. The target audience for the film is clearly the younger crowd, but fans of the nation's number one cat will more than likely find Garfield: The Movie an enjoyable and fun theatrical romp. 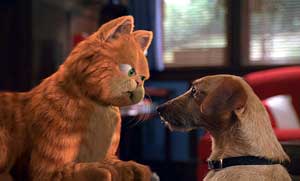 Breckin Meyer did a decent job as Garfield's owner Jon Arbuckle, but his character has been significantly changed. While the comic paints him as a bumbling idiot who can't get a date to save his life, the movie makes him timid but much less like the fashionless, date repellant he's expected to be. And the sarcastic and cynical veterinarian Liz, who would only ever date Jon to end his persistence in asking her out, is sweet and even interested in Jon here. Nermal, originally dubbed "the world's cutest cat" is dumbed down here and virtually unrecognizable from his cartoon counterpart. Finally, the pink-colored Arlene (now grey), feels more like an after-thought than anything.

So with the nitpicking, what's redeemable about Garfield: The Movie? The movie really IS all about Garfield. So while the really lame trailers and posters stressed that it was all about Garfield, they were right. With the exception of Odie, every other character is barely developed and are virtually outlines of their actual selves. And with the original voice of Garfield having passed away a few years ago (Lorenzo Music), Bill Murray is an inspired replacement for the fat cat. Murray, as with everything he does, breathes great life and charm into the lovable fat cat. The fact he's the only animated character really stands out (especially in a scene where Jon is holding him), but it otherwise works. The movie itself is more cute than funny and aimed almost solely at the younger crowd. Not many adults, unless suckers for Garfield (like myself), will probably care too much for the film. Some will argue Garfield wouldn't do some of the things he does here, but they obviously don't know his character too well. I just found it a joy to watch a lot of his antics and they worked really well within the story given.

All in all, I enjoyed the film much, much more than I expected too. With all of the negative reviews floating around written by people who haven't got a clue about Garfield, it was hard to know what really to expect. So despite some details that mess with the way some characters are supposed to be, and the fact the movie is more directed to kids than anyone else (whereas films like Shrek can be enjoyed by any age), I still walked out of the cute and sometimes cheesey Garfield: The Movie content. So if you're looking for another film to take your youngsters too besides Shrek 2 this summer, Garfield: The Movie would be a fine choice.

Violence: Mainly just Garfield pushing Odie around and other comic violence. We see a dog zapped with a shock collar to make it do tricks. We see a person given electric shocks and attacked by dogs (played for laughs). Disclaimer: All reviews are based solely on the opinions of the reviewer. Most reviews are rated on how the reviewer enjoyed the film overall, not exclusively on content. However, if the content really affects the reviewer's opinion and experience of the film, it will definitely affect the reviewer's overall rating.