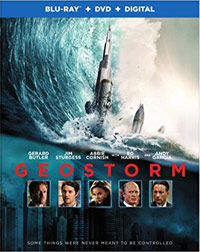 When the network of satellites designed to control the global climate starts to attack Earth, it's a race against the clock for its creator to uncover the real threat before a worldwide Geostorm wipes out everything and everyone. (from IMDB.com)

There's definitely a place for the disaster film, however, it seems to be one of the most difficult film genres to get just right. These days, the disaster film ends up turning into some kind of PSA for how we treat the Earth, and the filmmakers use a blockbuster popcorn film to elicit a sense of guilt from their audience. Sadly, the films themselves just usually aren't that strong of a product, as evidenced by The Day After Tomorrow, 2012, and most recently, Geostorm. Aside from the fact that Geostorm is an ill-timed release, coming after a string of disaster-scale weather around the world last year -- like floods and devastating hurricanes, etc, the film is just a big mess of a production. It's certainly a disaster film, but it's not the disaster they were hoping to portray.

Geostorm has some of the ingredients you'd expect to work for a film like this; a pretty good cast, which includes Gerard Butler, Andy Garcia and Ed Harris, leads a film directed by a man who produced big movies like Independence Day, Godzilla (1998), and Stargate. However, director Dean Devlin has never directed his own feature film before Geostorm (just stuff for TV), and he even wrote this film (but he also wrote Independence Day and Stargate). It's a huge film for a first-time director to helm, and it's apparent that he's bitten off more than he can chew here. While the trailers made the movie premise look as ridiculous as one could imagine, the film's story itself is surprisingly more involved than you would expect. It injects an element of mystery as to who is behind the weaponizing of the weather, giving a somewhat interesting plot, however the quality of its execution feels more like a throw-away plot from a season of 24 than something done really well. And the dialog that Garcia and Harris are heard uttering is often so poorly written that you just can't help but feel bad for these previously celebrated actors.

When the movie opens and is narrated by a thirteen year old girl who tells us about new system that's been implemented to control the weather in our atmosphere and is literally called "Dutchboy," you know you're in for a bumpy ride. Worse yet is hearing the name spoken in all seriousness from a cast who tries so hard to sell it. There's so much about the tone of this movie that doesn't work that feels truly unfortunate. A movie like The Core ended up being surprisingly fun because it knew not to take itself so seriously. But Geostorm is almost entirely serious, trying to sell itself as a real "this could happen -- and SOON!" scenario. So when there is painfully bad attempts at humor occasionally thrown into the mix, it feels out of place and entirely not funny. It's also sad that some of the way Devlin directs the action makes things seem more confusing than as intriguing as it's supposed to be. For example, there's a scene where a man appears to be stealing secrets and hiding them in a locker before getting trapped in a space station hallway that suddenly locks and then rips open, freezing him to death and sucking him out into space. It'd be more laughably bad if it wasn't so confusing as to what in the world is going on in the scene. It's later explained (and is way more important to the plot than the scene feels like it is at the time you see it), but the "accident" that killed the man being revealed as some kind of sabotage makes no sense.

The action is also a lot of hit-and-miss moments. Devlin manages to give us moments of interest while playing off the mystery of who caused what to happen (even if the idea and motivation behind stuff is completely ludicrous), but there are so many crazy, silly things that happen that it goes way past the potential for enjoyment and just becomes embarrassing to watch. It's hard not to feel bad for everyone involved. And while the actors try to do the best they can with their parts (except maybe for Jim Sturgess, who just does a bad Keanu Reeves impression for most of the movie), you're likely to find it difficult to care much about their fates.

The content isn't too bad for a disaster film, but there's a handful of profanity and a surprising amount of blasphemy mixed in with the weather-based violence and casualties. We see a lot of miscellaneous people running away from weather disasters, with many being frozen instantly or getting crushed by a tsunami wave or something. One scene shows a soldier walking up to a frozen man in the desert and touching his frozen hand, causing it to snap off at the wrist and shatter on the ground. We then briefly see the red stump of their arm where the hand broke off. Another character is violently hit by a car and we watch them die with blood on their face. One character is seen quickly freezing when exposed to space and then getting sucked out of a space station. But, for the most part, there isn't a lot of graphic violence (When a man is shot up through a car windshield and then shown dead on the ground, there's no blood at all). Finally, the only sexual content is seeing a dating couple in bed together - both clothed, but the woman wears a cleavage-showcasing camisole, and they make out a bit before being interrupted.

I could go on and on about all that was wrong with Geostorm; it offers a lot to write about. In all truth, you could probably do a lot worse with your entertainment choices than this movie, but why waste your time? Geostorm is mildly entertaining, but it's so poorly written, conceived, presented and soulless that you're likely to wish a "global event" would occur to wipe this one off the face of the earth. (OK, maybe it's not quite that extreme.) Skip Geostorm and watch/rewatch San Andreas or Twister. Geostorm offers a lot of spectacle, but it simultaneously proves that spectacle just isn't enough anymore.


Geostorm is available in a Blu-Ray combo pack with a DVD and a digital copy, on a single-disc DVD, and through the usual digital providers. The HD transfer is beautiful, and there are just a couple of making-of extras included.

Wreaking Havoc (6:30) is the first featurette, where the filmmakers discuss how they approached the action and effects in the movie. We get some neat making-of insights into how the disasters were conceived for the screen.

The Search for Answers (4:14) has the actors and filmmakers talking about how global warming is affecting the Earth and how the movie is a response to it. Director Dean Devlin explains how he wrote the story for the movie after having explained global warming to his 6-year-old daughter who then asked why we didn't just build a machine to combat it.

An International Event (5:41) covers the international cast, the appearance of famous Chinese actor Daniel Wu, and the intentions of creating a nationality-inclusive cast throughout the story. (1 use of "g*dd*mn" as heard in a scene from the movie.)

Sex/Nudity: We see men wearing just towels walking around a locker room; Sarah reveals a lot of cleavage while lying on a bed while wearing a camisole. She and Max make out (with intentions for more) but are interrupted by a phone call. We see Sarah standing in the background in her camisole while Max is on the phone; We see girls and guys in bikinis and swimming trunks on a beach in a couple scenes; The camera focuses on a woman in a bikini running away from a blast of freezing air.

Alcohol/Drugs: While holding a beer, Jake offers one to Max who declines.

Blood/Gore: A soldier walks up to a frozen man in the desert and touches his frozen hand, causing it to snap off at the wrist and shatter on the ground. We then briefly see the red stump of their arm where the hand broke off; We see a man's face freezing when he's exposed to space; A man who's hit by a car has a lot of blood on his hands and face;

Violence: The movie opens with a montage of footage of real-life weather-based disasters - like floods and firest, and we see all kinds of devastation, including dead bodies laying on the ground and some under white tarps (probably real, too); We see soldiers walking up to a desert town that's been frozen, with people frozen dead in their tracks; A man in a space station hallway gets trapped in between two doors while the sides of the walls blow out and he freezes before getting sucked out into space; Fires erupt from beneath a street in China causing car accidents and buildings to collapse in a domino effect; A large mechanical arm goes haywire on the space station, swinging a big pod around nearly killing the crew; Jake's space suit goes awry and throws him around space and into a satellite, nearly killing him; A man is hit by a car (shown in full) and dies while laying on the ground; Sarah holds a gun on a woman in her home; A security officer points a gun at Jake briefly; Boulder-sized hail strikes Japan, causing lots of car accidents and building destruction; Instant freezing occurs in Brazil where people are seen on a beach in swimwear running away from a coldfront. We see birds dropping out of the sky frozen and an airplane crash through buildings onto a street below; A space station starts blowing up slowly; Jake and another man fight each other, punching each other; A gun goes off on a space station and a man is sucked out into space; A man shoots at Max who runs away; Sarah fires her gun in the air in a crowd to clear a building; Tornadoes rip through India; Severe, intense lightning hits Orlando, causing mass destruction; A stadium explodes when lightning hits it, and cars explode on the street; We see severe heat hit Moscow, causing fires; Sarah spins her car around and shoots up another car, killing the driver. The passenger inside, pushes the dead guy out of the car and continues driving. Sarah rams the car, causing it to flip, and then it blows up; A man uses a rocket launcher to blow up a car; Max punches a man in the face; A tsunami slams into the United States Emirates, causing buildings to collapse; We see a massive explosion as the space station finishes blowing up. Disclaimer: All reviews are based solely on the opinions of the reviewer. Most reviews are rated on how the reviewer enjoyed the film overall, not exclusively on content. However, if the content really affects the reviewer's opinion and experience of the film, it will definitely affect the reviewer's overall rating.