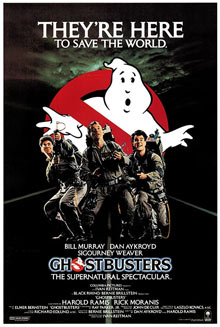 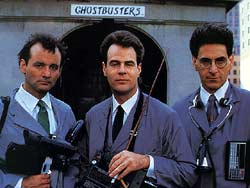 Bill Murray, Dan Aykroyd, and Harold Ramis star in this supernatural comedy. When Columbia University downsizes their parapsychology department, Doctors Peter Venkman (Murray), Raymond Stantz (Aykroyd), and Egon Spengler (Ramis) make the leap from scientists to Ghostbusters - investigators and eliminators of paranormal pests. When the team's first client Dana Barrett (Sigourney Weaver) discovers her refrigerator has become a portal into the spiritual dimension, the Ghostbusters come face to face with an ancient evil force with plans to destroy Manhattan and the world along with it...

In 1984, a comedy like few others made waves at the box office. Ghostbusters, which boasted a solid comedy cast that includes Bill Murray, Dan Aykroyd, Harold Ramis, Rick Moranis and Annie Potts, was crafted in a way where its sincere, dry humor relied mostly on witty dialog and delivery rather than sight gags or manipulative musical cues. The film hit screens when I was barely four years old, but upon seeing its re-release a year or so later in the theaters, I'd been won over by its excitement and charm. Many kids my age aspired to "bust" ghosts, and when a successful cartoon series and decent (although sorely under par) sequel followed, the Ghostbuster craze continued. Now [thirty] years later, Ghostbusters is literally a comedy classic and still fun to watch despite its dated style and effects.

Ghostbusters was ahead of its time in the mid-80's. While relying more on physical effects and stop-motion animation and puppets rather than today's less imaginative CGI, the film succeeds at creating more tangible moments than it fails to. Sequences like eggs hopping out of their carton and frying on the kitchen counter or beastly arms ripping through an armchair are eerily realistic, while jerky shots of a stop-motion "terror dog" are more laughable today than anything. But the effects in Ghostbusters are intended to enhance the film, not make it. It's the comedy, the acting, the writing, and the creativity behind the film that truly make it succeed. It's not too common that you find a film that you loved as a child still holds up over two decades later for adults. But perhaps that's where one of Ghostbusters' main faults lies... its target audience.

There's a lot to talk about when it comes to the content of Ghostbusters. Given that I saw the film before I was saved and never really thought about the spiritual content of the film until I was older, I never took the film for more than what it was. Ghostbusters is a comedy about three guys who study the paranormal and save New York City from an evil spirit intending "to bring about the end of the world." There's very little to take serious about the film, especially when it makes it clear that comedy is its main intent from beginning to end. Within the story, cultic references arise, even causing a lead character to refer to Christianity as merely an "ancient myth." In that particular scene, however, another lead defends the faith and gives the other character some food for thought about the book of Revelation. The references to Christianity virtually stop there, with a central theme of good overcoming evil remaining (and of course, sign-wielding end times enthusiasts permeate the background in a crowd scene later in the movie). The spirituality of the ghosts and goblins and ancient myths and "gods" presented in the film aren't done in a preachy or factual way, but merely are approached more so as fantasy (Heck, even Aykroyd's character cites a chapter in Revelation wrong). And with comedy being what weaves the story together, it's easy not to take the material too seriously. If the film didn't sort of wink at the audience throughout its duration, then one might need to pass this one by altogether.

Despite the lighthearted comedic nature of the film, and its PG rating, Ghostbusters isn't quite a family film. When released, the movie rating system only offered G, PG, and R, with the mid-range PG-13 rating not yet existing (but would first be used that same year in 1984 with Red Dawn). With that said, I believe if this film were released now under today's MPAA rating standards, it probably would score a PG-13 rating. Some of the film's dialog, while it soared over my head as a youngster, is a little too adult for children, containing a handful of "S" words as well as other colorful phrases. Also, the horror aspect of the story is a bit intense in some scenes. From the opening scenes with the ghost in the library to the terror dogs and the frightening sequence where Dana is seized by the dogs in her apartment, the film has its fair share of creepy moments. It's a shame, actually, considering that the film still contains so many memorable scenes like the cheerfully-grinning Stay Puft Marshmallow Man terrorizing New York City or the boys' first experience with ghostbusting at the Sedgewick Hotel where they first encounter Slimer.

Seeing the objectionable and questionable content listed above may cause some to write the film off entirely, and ultimately question why such a film would land first on my top list of all-time favorite films. The comedic genius of Murray, Aykroyd, and Ramis, coupled with the intriguing and exciting idea of ghostbusting (those proton packs are almost as irresistably cool as a lightsaber from Star Wars), really make this one stand out. The guys play off each other like a modern day Marx Brothers team, lead by the ever-talented deadpan humor of Bill Murray. But the idea behind Ghostbusters feels as though it could have been adapted from a famous comic book. However, its completely original story and realistic portrayal set in New York City really adds a lot to the film. While many of today's comedies probably would be more vulgar, more goofy and more campy (you can look at Ghostbusters director Ivan Reitman's abysmal 2001 mistake Evolution as such an example), the comedy in Ghostbusters just seems more honest and real. And considering that, as Christians, we fight spiritual battles everyday, the concept of warring against supernatural evil really isn't that foreign to us.

A review of this 1984 film probably isn't necessary, but a recent revisit inspired some thoughts on it. I can't recommend Ghostbusters as one for the whole family, but the TV edit does help with many of its rough spots. Those who are older and just looking for a little funny, light entertainment should either check out Ghostbusters or catch it on TV sometime. Some content prunings would really have strengthened this film more, making it more accessible for the younger audiences, but it's still just a really fun movie.

For 2014, its 30th anniversary, Ghostbusters returns to the big screen for one week in a fully remastered presentation. As a fan who even keeps a digital copy of the film on his iPhone, it was difficult not to take advantage of this big screen revisit and I'm glad I did. In 2011, the film returned to theaters briefly in October, but it wasn't quite remastered. This time around, in line with a recent 4K Blu-Ray restoration, the film hits screens looking better and clearer than it ever has before. While you can probably buy to own the film on Blu-Ray for the price (or less) than a ticket to the cinema, there's something about that big screen experience with big sound, vivid detail, and seeing it with an audience that you can't quite replicate at home. Unfortunately, the original film used to make the movie in 1984 was extremely grainy, and that does stand out tremendously on the big screen. Still, you adjust to it after a few minutes, as it's entirely a forgivable fault given that it was created three decades ago. If you're a fan or have never seen Ghostbusters in a theater setting, now's the time to do it!

Sex/Nudity: Not really sexual, but Dr. Venkman asks a frightened and emotional woman who's seen a ghost if she is menstruating (which causes a person next to him to ask "What's that got to do with it?"); While talking to Dana about her problem, Venkman says "Why don't I take miss Barrett back to her apartment and check her out?" and realizes he misspoke; At her apartment, he looks around for any paranormal activity and peeks into her bedroom. Dana says "That's the bedroom, but nothing ever happened in there." He then slyly mumbles "What a crime;" During a montage sequence, Ray has a dream that the ghost of a beautiful woman is floating above his bed. After she disappears, he watches his pants unbuckle and unzip by an unseen force (we see his briefs for a moment). The camera then focuses on his face making an especially pleasured reaction and cuts to him outside of his dream falling out of bed; While Dana is possessed by Zuul, she grabs Peter and throws him to the bed. She straddles him and tells him she wants him inside of her. He laughs and said "Go ahead!" and then says no, it seems pretty crowded in there already. After briefly kissing, he gets away from her (mostly played for laughs); Following an earth tremor, we see Dana and Louis on a roof top (both possessed by evil spirits) with Louis' belt buckle somewhat undone (implying they fooled around or slept together); While trying to decide how to fight the Stay Puft Marshmallow Man, Peter jokes, "He's a sailor, he's in New York, if we get this guy laid, we won't have any trouble!"; When Peck is harassing the Ghostbusters at city hall, Venkman calls him "Mr. Pecker." Ray also says "The protection grid was shut off by d*ckless here." The Mayor asks "Is this true?" And Peter responds, "Yes, it's true. This man has no d*ck." Peck then rushes to attack Peter as he shouts "Well that's what I heard!"

Blood/Gore: We briefly see a skeletal ghost driving a taxi that seems to be in some kind of decomposing state.

Violence: (*Contains minor spoilers*) The ghost of a woman changes its form to look hideous to frighten Ray, Peter and Egon (who then run away); The Ghostbusters fire upon a cleaning lady's cart in a hotel when startled; Peter is "slimed" by a ghost and we see him lying on the floor; The Ghostbusters trash a ballroom to capture a ghost, firing on a chandelier which crashes to the floor, tossing tables, and burning the walls with their proton streams; Eggs fry on a kitchen counter and Dana is frightened when seeing creature in her refrigerator; Hands rip through Dana's armchair and pull it into the kitchen where a "terror dog" waits at the door. She's screaming while this happens; A "terror dog" tears through a bedroom door and chases Louis through the park, cornering him outside a restaurant (where the scene ends); Dana, possessed by a spirit, floats above her bed and growls at Peter; The containment unit at the firehouse explodes, and Dana's apartment does so shortly afterward; A taxi cab zombie ghost is scene in the front seat of a cab as a patron gets inside. We then see the car speeding recklessly through the street, causing other cars to veer out of the way while one crashes into garbage cans; Gozer shoots the Ghostbusters with some kind of electricity, throwing them backward; a large marshmallow man walks through NYC, stepping on buildings and cars; The Ghostbusters blow up part of a building; etc... Disclaimer: All reviews are based solely on the opinions of the reviewer. Most reviews are rated on how the reviewer enjoyed the film overall, not exclusively on content. However, if the content really affects the reviewer's opinion and experience of the film, it will definitely affect the reviewer's overall rating.