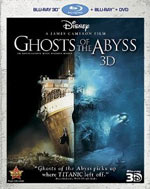 Ghosts of the Abyss

Academy Award winning director James Cameron journeys back to the site of his greatest inspiration - the legendary wreck of the Titanic. With a team of the world's foremost historic and marine experts and friend Bill Paxton, he embarks on an unscripted adventure back to the final grave where nearly 1,500 souls lost their lives almost a century ago. Using state-of-the-art technology developed expressly for this expedition, Cameron and his crew are able to explore virtually all of the wreckage, inside and out, as never before. With the most advanced 3D photography, moviegoers will experience the ship as if they are part of the crew, right inside the dive subs.

As you probably learned from reading either of my Titanic film reviews (meaning my original 1998 review or the 2012 rewrite), I've been fascinated by the sunken wreck of the most infamous ocean liner disaster in history since I was in the third grade and had first read of its discovery. Why, you ask? The answer is simple: I have no idea.

There's something about that deep sea resting place of the magnificent vessel that really intrigues me. Maybe it's the haunting images of the vacant man-made ship virtually melting 12,500 feet beneath the ocean's surface. Or maybe it's the mysteriousness of what exactly transpired that night and just how in the world the ship ended up broken in two on the ocean floor. Either way, I have to wonder; could I ever venture there myself to see its final resting place? Absolutely not (I think I'd be too claustrophobic and then terrified something horrific would go wrong). This intense and vulnerable feeling was shared by actor Bill Paxton as he made his first real-life trek to the bottom of the ocean to gaze upon the grave site. In an "unscripted" and semi-realistic adventure, a crew of Titanic historians, lead by director of the 1997 theatrical phenomenon, James Cameron, sought out to further explore the ship. The mission was plain and simple but the execution was dangerous and risky. 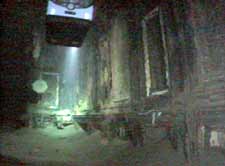 For those enchanted by the disaster that happened one frigid night in April in 1912 on the icy sea, this unique documentary will be right up their alley. Ghosts of The Abyss may seem trite or cliche to some, but to others, it's an hour of amazing imagery and meaningful discoveries (An the "Extended" version on the DVD/Blu-Ray release has an extra half hour of footage added in). But in this film, Cameron makes use of 3D photography that allows the viewer to really feel like they're venturing into the submarines with the crew or gliding across the actual deck of the sunken Titanic. Cameron's use of two specifically designed bots (affectionately named Jake and Elwood) allows the human eye to see parts of the ship that have not been seen since the ship went down 89 years before this expedition. The visuals are breathtaking and the film is engaging.

Ghosts... is not without its share of problems, though. While none of them are so bad they really hurt the film significantly, they're enough to leave the appreciative viewer hungry for more. The mere hour-long running time is just enough to get our appetite going, but the documentary ends prematurely without a real 100% satisfaction guarantee. I had left the theater feeling great I saw it on IMAX 3D, but I wanted to see more. Unlike Cameron, we did not see everything those bots saw or everything the inhabitants of those submersibles saw when they peered out their portal windows. I felt more needed to be covered and that a lot of the film felt as if it were focusing too much on the expedition itself and not enough about the expedition's subject matter (And they just pause for a brief second to show the stern of the ship, while I hoped they could have focused on it more -- and more of the scattered debris around the ship). The Extended version of the documentary on the DVD/Blu-Ray releases does help fill in some gaps and add more meat to the bones of this expedition, but it still contains the other problems this contains as well. While the cheesy reenacted "ghost" footage is far more inferior in quality to footage they could have used from the 1997 movie, it does get the job done well enough. Still, the movie's main problem is the so-called "unscripted" nature. It wasn't until a later viewing that I noticed just how unnatural some of the supposed "natural" stuff feels. Granted, James Cameron is a movie director, not a documentary director. There are no real talking head interviews, and Paxton never once acknowledges the camera watching him, but often seems aware of it anyway (and therefore may be "performing" for it). A lot of the narratives from Paxton sound far too thoughtful and scripted, and some of the drama and humor feels forced. However, anyone who has seen Bill Paxton act in a film could probably sense when Bill isn't faking something on screen (his "acting" here is much better than his performance in the Titanic movie). 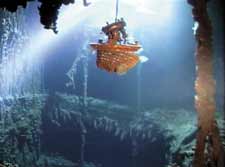 An interesting tidbit about the expedition is that, apparently, the bots Jake and Elwood had taken three years to develop, and this film was made in 2001 (explaining why Cameron hadn't made a film since Titanic in '97). In fact, the audience is given a first-hand look at how the crew reacted to the news of the September 11th, 2001 tragedy and how it ultimately affected their expedition, almost leading them to cancel the rest of the project.

All that aside, it was just wonderful to finally get a look at the inside of Titanic. It does get a little too visually involved when Cameron begins using video pictures-in-picture to show different views of parts of the ship and camera angles, though. But watching it with the ability to rewind and maybe even put it in slow motion makes some of these moments easier to see. On the other hand, when he used cool-yet-eerie overlays of reenacted 1912 footage to show how life on the ship would have looked before the wreckage, it was used in a way that added to moments--particularly when you can see just what the room or staircase really looked like on the ship before the wreckage became a rusticle-covered grave site.

Overall, I thoroughly enjoyed Ghosts of the Abyss. It's not perfect and it's certainly not for everyone, but it's a fantastic sight for the IMAX theater setup and it looks great in 3D and HD. If the Titanic has ever been intriguing to you, then you won't want to miss this documentary. Seeing deep inside the ship for the first time is a truly remarkable experience for any Titanic enthusiast. 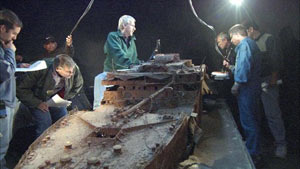 When Ghosts of the Abyss debuted in theaters in 2003, it was released in 3D on IMAX screens only. It then released in regular DVD format and has not, until now, been available in 3D. The new Blu-Ray releases feature the film remastered in HD, with a bonus DVD along with it. There is also a separate 3D release which also includes the 2D Blu-Ray release as well, making it the quintessential disc set of the film to own.

Extended Version (1:31:00) - This is for the real Titanic enthusiasts. If you're really interested in the ship and the sinking and the wreckage, this is the version to watch. With 30 extra minutes of footage, we hear more from the experts and the dive team on their expedition, and we get a little more footage of the Titanic on the ocean floor. The "Theatrical Version" is still a solid cut of the film, but it serves more as a drive-thru cut with the Extended Version being the main entree for the serious fans.

Reflections From The Deep (29:28) - Bill Paxton and James Cameron talk about the documentary and the "ghost" footage used in the film as well. Cameron talks about how they cast lookalikes for the 1912 flashbacks and staged the overlay footage with the real wreckage footage to get the right look. We then hear from the crew who talk about how they crafted the digital images in the film. Some of the best parts of this segment are the additional bits of footage of the crew interacting on the ship, goofing around, and clearly not doing anything scripted. This documentary about the documentary is actually in "Full Screen" format, not widescreen, and originally appeared on the original DVD release, but it appears to be in HD here and is still a wonderful addition to this release.

The Cheese Sandwich Prank (2:26) - This is some footage "excerpted from 'Goats of the Abyss' crew video" that shows really low quality video from the crew and some of the dives. The "Cheese Sandwich Prank" is apparently that someone on Cameron's crew had told whoever prepares the lunches to only ever give Cameron a cheese sandwich with "lots and lots of butter." Cameron seems genuinely surprised in his footage as he eats his cheese-only sandwich, but there's some footage of a guy making the call about prepping the sandwiches for Jim that feels a bit hokey and staged.

Alcohol/Drugs: Some flashbacks of the Titanic passengers drinking during the sinking.

Violence: Clips of the ship breaking up and sinking from the film Titanic. Disclaimer: All reviews are based solely on the opinions of the reviewer. Most reviews are rated on how the reviewer enjoyed the film overall, not exclusively on content. However, if the content really affects the reviewer's opinion and experience of the film, it will definitely affect the reviewer's overall rating.