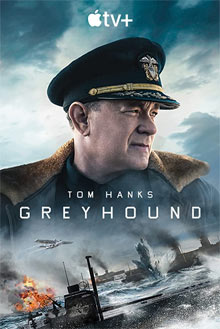 Early in World War II, an inexperienced U.S. Navy captain must lead an Allied convoy being stalked by Nazi U-boat wolfpacks. (from IMDb)

With 2020 bringing a newfound uncertainty and a need to rethink how we go about our usual day-to-day routines, the movie industry has been one of the many professional worlds to have to redefine how they operate. Tom Hanks' newest film was set for a 2020 theatrical release, but with a worldwide pandemic, it forced Hanks to approach Apple to distribute the film exclusively to their paid subscribers of Apple TV+. So the much-delayed film has finally found a wide audience through Apple, and it hit the streaming service on Friday, July 10th.

The story of Greyhound follows a U.S. Navy captain named Ernest Krause who must lead an Allied convoy through Nazi U-boat infested waters. Hanks plays Krause, a fictional character named after a real life man who, according to Wikipedia, was an "American coxswain serving in the United States Navy during the SpanishAmerican War who received the Medal of Honor for bravery." While the movie, which is based on a 1955 book called "The Good Shepherd," by C. S. Forester, takes place in 1941, early in WWII, the real Krause wasn't ever in this war, having been active in the later 1800's. Still, Greyhound feels very much like a realistic period film, and will have many viewers hitting the web to learn if it was an actual event or not. Even though it wasn't, it was largely based on true events and people who served during the second World War. 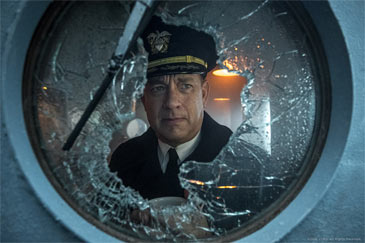 The film is surprisingly a nailbiter. I remember sitting on the edge of my seat, barely able to stand the suspense when I was in the theater watching the 2000 U-boat movie, U-571, for the first time, and Aaron Schneider's direction in Greyhound, aided by Blake Neely's tense Dunkirk-like score, really made this an edge-of-your-seat thriller. Forester's book was adapted for the screen by Hanks himself, and he stars as the God-fearing main character, Krause. As the captain frequently quotes scripture and prays (and glances at a card that states "Jesus Christ is the same yesterday, today and forever"), as a fellow believer, I found it easy to immediately be drawn to the character. And Hanks brings a lot of sincerity and a quiet confidence to him. The players surrounding Hanks are also excellent and believable. Stephen Graham, who might be most recognizable for his portrayal as Scrum in the last two Pirates of the Caribbean sequels, is excellent as Krause's righthand man, Cole. And Elisabeth Shue gets painfully little screen time as Ernest's love interest, Evelyn. Its slick runtime of just 90 minutes keeps the tension high and the action coming, but sadly there isn't a lot of character development for any of the characters. Hanks is excellent in the role, and he makes it easy to care about his character, but even his character isn't given much of a backstory to build on. It's the film's greatest weakness that holds it back from real greatness. But, as it is, it's still a solid thriller that's worth watching. My only other gripe aside from this is the film's reliance on CG effects to recreate much of the action and scenes at sea. It isn't always noticeable, but it's enough to make you wonder how much of the film was made on a set with a blue screen around it, or if the actors ever spent any time on a real boat at sea. Whatever the case may be, Schneider gives it a gritty enough feel to pull you in to the tension the crew of the Greyhound are feeling.

Despite debuting on a streaming service (where usually anything goes), the film is rated PG-13 and comes in at a rather light PG-13. There is a single "F" word from one of the Greyhound crew, which he immediately apologizes to the captain for, but it feels out of place and perhaps even included only to make sure the film wasn't given a PG rating. Otherwise, there's some war violence, and very little blood, but the roughest moment may be a brief shot of a cut on a man's forehead being stitched up. Other language is pretty infrequent, with just a couple uses of "h*ll," "d*mn," and "S.O.B," and no uses of blasphemy. There is also absolutely no sexual content of any kind.

As far as war movies go, Greyhound is on the lighter side of the spectrum, but what it lacks in graphic war violence (I have no complaints there), it makes up for with tension and suspense. Although most of the characters feel a bit underwritten, with no time taken away from the action to breathe and build up who these men really are, Greyhound remains an engaging and even inspiring movie. With it releasing at a time when it feels like this nation is trying its best to kick God out the door, Greyhound reminds us through its central character that faith and devotion are paramount during times of tribulation and testing.

Blood/Gore: Flusser and Shannon have bloody lips and black eyes from fighting each other (off screen); The Greyhound is hit with friendly fire. A man on deck is shot and we briefly see blood on his mouth as someone runs over quickly to aid him; We briefly see a doctor stitching up a cut on a mans forehead; The captain touches his heel and finds blood on his fingertips; As the captain takes off his slippers, we see a little bit of blood on them.

Violence: Some spoilers ahead... Flusser and Shannon have bloody lips and black eyes from fighting each other (off screen); We see exploding depth charges underwater; U boat debris is seen floating on the surface of the water; We see a ship on fire and sinking; At night, Greyhound lightly sideswipes a large freighter; We see a freighter on fire; The Greyhound is hit with friendly fire. A man on deck is shot and we briefly see blood on his mouth as someone runs over quickly to aid him; We see more depth charges exploding in the water; Another supply ship is hit and catches on fire; A ship explodes; The Greyhound fires their deck guns as a U-boat; More ships catch fire; We briefly see a doctor stitching up a cut on a mans forehead; Greyhound's deck guns fire on a U-boat; Greyhound gets hit and we see a deck fire and hear men screaming (but we don't see any of the aftermath); Greyhound hits and sinks a U-boat; A funeral is held on deck of the Greyhound for three men who were killed. We see their bodies in white sheets as they're dumped into the ocean; The captain touches his heel and finds blood on his fingertips; Greyhound has a head-on fight with a U-boat. We see lots of shooting and torpedoes zipping through the water; A U-boat explodes; Air bombs blow up a U-boat that's underwater (and we see the debris on top of the water). Disclaimer: All reviews are based solely on the opinions of the reviewer. Most reviews are rated on how the reviewer enjoyed the film overall, not exclusively on content. However, if the content really affects the reviewer's opinion and experience of the film, it will definitely affect the reviewer's overall rating.