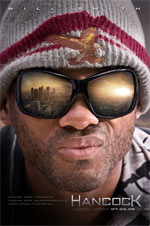 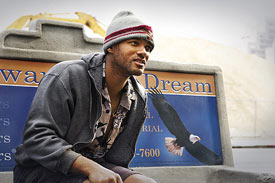 There are heroes... there are superheroes... and then there's Hancock (Will Smith). Edgy, conflicted, sarcastic, and misunderstood, Hancock's well-intentioned heroics might get the job done and save countless lives, but always seem to leave jaw-dropping damage in their wake. The public has finally had enough - as grateful as they are to have their local hero, the good citizens of Los Angeles are wondering what they ever did to deserve this guy. Hancock isn't the kind of man who cares what other people think - until the day that he saves the life of PR executive Ray Embrey (Jason Bateman), and the sardonic superhero begins to realize that he may have a vulnerable side after all. Facing that will be Hancock's greatest challenge yet - and a task that may prove impossible as Ray's wife, Mary (Charlize Theron), insists that he's a lost cause....

Hancock is certainly not your typical superhero story. The film arrives at the perfect time, riding the successful wave of box office hits involving comic book characters - from Spider-Man to Iron Man. However, Hancock is a new and unique character all together. Suffering from loneliness and the lack of adoration from the public, Hancock is a middle-aged man with super powers who has some of the worst social skills you can imagine. Often drunk and often foul, Hancock just doesn't seem to care about anyone or anything. However, this begins to change when he meets a sunny PR man named Ray Embrey who sees the chance for good in him while trying to save the world in a more economic sense himself. 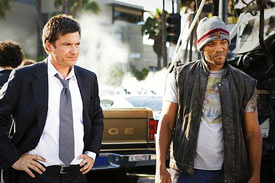 Will Smith steps in as Hancock, pulling off the "could care less" persona perfectly. While he defaults to a wrinkled nose and curled lip perhaps a bit too much to prove to everyone he doesn't care, Smith displays in his eyes the pain behind Hancock's behavior, making the abrasive character likeable because you realize there's a lot more to the man besides booze and brawn. Jason Bateman is perfect as Ray Embrey, easily likeable as the ambitious character who hopes to help turn Hancock and his image around. Smith and Bateman made a great duo who surprisingly share a lot of the film's screentime here. While Smith is coming off of the one-man-show that was I Am Legend, it's almost strange to see him sharing just as much focus in Hancock as Bateman. But here it works well for the story and for building up what ends up being a pretty exciting summer run.

The story - as it centers around a lone superhero who's origins are unknown - is presented by actor-turned-director Peter Berg in almost a similar fashion to his 2003 action comedy The Rundown. Hancock is shot very stylized, mixing some shaky handheld camera in with dramatic framing or quick shots back and forth between characters. At times, Berg captures some great action, while others -- well, you can't help but feel like another director could have pulled off the story with a stronger outcome. Certain aspects of the filmmaking may feel a bit amateurish, while others are pretty much right on the money. Also, Berg relies a bit too heavily on special effects and these effects just aren't all that impressive. With recent effects-laden superhero films like Iron Man or the X-Men and Spider-Man franchises, most of what Hancock has to offer is a bit second rate in that department. What carries Hancock most, however, is a pretty fun superhero story, some good action moments, some solid comedy, the drama behind Hancock's pain, and the charisma of Smith and Bateman. The tone of the movie does change quite a bit over the course of the film, but Berg holds it together well enough that when the film's climax turns pretty dark in spots, you're not completely thrown for a loop and left wondering what happened to the action comedy that preceded it. However, those moments end up being considerably more intense than anything before them. 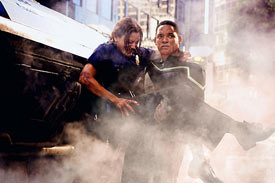 The biggest downside to Hancock is its content. This isn't Spider-Man or even the more adult-oriented nature of Iron Man. While being a depressed alcoholic sporting a really bad attitude, you'll hear Hancock toss the "f" word at a heckler, while characters frequently call him an "a**h*le" (including a child or two) while other characters aren't afraid to use profanity from time to time throughout the movie. Also, Hancock is frequently threatening to shove someone's head up another person's rear end, and finally, while in prison, Hancock makes good on his word. With that, we do see a man bent over behind another man when the deed is done. It isn't gratuitous, but you see enough to get the gag. Finally, there's heaps of action violence, with the climax proving to be the bloodiest and most brutal in the film. While one villain loses his hand and we see Hancock holding it (it's not bloody), there's another time later in the film where an axe takes off a character's hand and, althought it isn't shown in great detail, it's part of a rather intense and dramatic action sequence. Given how most of the rest of the film isn't so brutal, the ending may be a bit shocking - especially for something of the superhero genre.

When all is said and done, I have to admit I enjoyed Hancock a lot more than I thought I would. Berg and company have included some plot surprises I won't expose here whith a little mythology behind the main character and some pretty good laughs along the way. While the edgy and vulgar content is mostly to convince us just why Hancock is such a hated jerk at first, it's a shame to find so munch junk in a film of the superhero kind. Parents should be warned that this isn't a kid-friendly action film - you can't expect Hancock to be a Bruce Banner or Peter Parker kind of everyday man-turned-hero. This is much more of an adult-oriented film. It's not a surprise that the MPAA originally rejected Hancock for a PG-13 rating several times before re-edits (and apparent, somewhat recent re-shoots) helped bring it down to a PG-13 from an R rating. Thankfully, the reported sexual content was omitted from the final cut, but we're left to deal with the language instead. With that said, Hancock works as a summer action popcorn flick, but the junky content makes it one that's unfortunately difficult to recommend.

Sex/Nudity: In a video, we see Hancock with burnt, smoking clothes that expose parts of his skin, and we see the side of his bare butt; Several times, Hancock threatens to shove a man's head up another man's butt. In one instance, we see that it happens, but first we see everyone's reactions around him and then the scene pans back to show a large man (clothed) with a person bent over behind him (presumably with his head inside the man's butt); Mary shows cleavage in a dress and a later outfit; Hancock makes fun of some criminals in a van, hinting that they might be gay. Hancock also calls individual images of superheroes "homo;" Hancock assures a female cop he's rescuing that pulling her to safety isn't anything sexual; A criminal accidentally calls Hancock "hand job"

Alcohol/Drugs: Hancock is frequently drunk. Several times others makes comments, but one person tells him he smells like a bar. Othertimes, we see him with bottles of alcohol in his hand or laying near him

Blood/Gore: A woman has some blood on her hands; We see Hancock carrying a man's severed hand holding a remote in his hand (not bloody); We see a bruise on a man's hand; We see blood on a man's shirt after he's been shot a couple times. We later see the bloody shirt again a few times and then with a bandage over a wound with some blood on the bandage; A person's shirt is bloody on the side where they've been shot and we see that several times; A person is shot multiple times and we see blood on their face and chest and coming from their mouth and dripping into water on the ground; A man's hand is cut off with an axe (seen in a darkly lit room without blood or gore, but we see the motion of the axe come down and the hand disappear)

Violence: We see an SUV being chased on a highway by police with one of the criminals in the SUV firing back at the cops. Hancock smashes through a road sign which destroys cars on the road beneath it, and he then crashes inside the SUV, is shot at (but not hurt) and then throws the vehicle around before smashing it into buildings and then impaling the front of it on a pole on a building's roof; Hancock throws some criminals around, including through windows (some presumably plummeting to their deaths); We see hostages with bombs strapped to them; A man's hand is cut off by a sharp piece of metal (not seen, but we see the hand afterwards, which isn't bloody); A person's hand is cut off with an axe (the motion is seen but we don't see any details or gore); Hancock destroys a train to save a person stuck on the tracks; A person is shot up and bloody; Another person is shot a couple times and we see blood on their clothes; Hancock is frequently smashing into things or breaking things, including being himself tossed through a house, and his crash landings into things; People are shot at and shot; Hancock throws a child into the air and catches him when he falls (for calling him names); and other action violence... Disclaimer: All reviews are based solely on the opinions of the reviewer. Most reviews are rated on how the reviewer enjoyed the film overall, not exclusively on content. However, if the content really affects the reviewer's opinion and experience of the film, it will definitely affect the reviewer's overall rating.