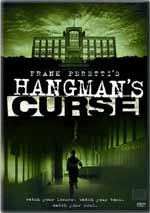 Eerie hallways. Hallucinations. Legendary hangings and haunted lockers. No one knows what's going on at Rogers High School. The clues are dim and disconnected: strange curses, hangman insignias and rare pheromones are all found along a trail of vicious teen bullying-- jocks vs. nerds vs. witches. What's to blame? A sinister power? An illicit drug? A wounding of some kind? Only the Veritas Project is undercover and on top of it. Dead-set on a mission to expose truth and save lives, their team takes on mysterious forces as they try to pull together the lives being torn apart by hatred and fear.

Christian-made movies often get a bad rap for poor acting, poor direction, and poor writing. The Left Behind films of a few years ago were the first baby steps generally in the right direction, but there really haven't been too many deeply groundbreaking Christian-made films. Last year's Hangman's Curse, a thriller based from Christian author Frank Peretti's novel of the same name is an entertaining affair but does it raise the bar any higher than previous films from the Christian film industry?

Hangman's Curse doesn't really offer much in the acting department to get too excited about. The biggest name in the film is common for playing smaller roles in bigger pictures like Daredevil, Behind Enemy Lines, or U-571. Keith is good here, but not especially memorable. Sadly, the only

performance worthy of note is in fact Frank Peretti's extended cameo as a really eccentric doctor/scientist. He's the film's much-needed comic relief. The main children characters of Hangman's Curse are essentially the children of the Veritas Project, Elisha and Elijah. Their performances are okay, but not very impressive. Both acting talents are for the most part unheard of, although you may have recognized Douglas Smith in a brief part playing a young version of Brendan Fraser's character in Blast From The Past or Leighton Meester from the Tarzan TV series. The kids get the most screen time and exchange some cute sibling rivalry moments, but perhaps do as good as they can with the material they have to work with.

The rest of the cast is virtually disposable. With extreme stereotypical high school clique divisions of jocks vs. goth students (complete with a line of jocks walking down the hall posing all tough, pushing "lesser" kids out of the way), the film gives off more of a Saturday morning afternoon special than a feature film. The story itself is interesting enough to make the film worth a viewing, however. It starts out as a thriller/mystery, slowly revealing the truth of what is happening in the school, but what really seals this film as a decent chiller is its conclusion. And while the conclusion may come off to seasoned thriller-viewers as a cheap way to get viewer's skin to crawl, it's effective. Another thing that Hangman's Curse has going for it is the content. Language and sexual content are non-existent while violence and drug content is minor or minimal. Personally, the conclusion rendered the film really hard for me to watch (and makes a repeat viewing highly unlikely). **SPOILER ALERT** (don't read on if you don't want to know an important plot element) If anyone, like myself, does not enjoy spiders too much, you'll want to completely pass on this film. The ending is literally riddled with probably hundreds of considerably large spiders that are given ample screen time. For anyone who has no problem with spiders, more power to you, but if you do, there are plenty to make this one disturbing viewing. **END of SPOILER ALERT**

Overall, Hangman's Curse is a so-so film with a decent story and ultimately a guilt-free thriller for Christian audiences. If you're looking for something a little bit more intense or creepy for your family to watch, this film's for you. But those picky about acting and direction will probably find themselves turning it off half-way through. Hangman's Curse may also be slightly disturbing for some (with the hanging elements or some creepy hallucinations some of the students see, or especially the film's concluding scenes), so please keep that in mind before purchasing or renting this movie.

Alcohol/Drugs: Undeterminable substances are found in children's lockers, so the possibility of it being drug-related arises.

Blood/Gore: It's not bloody or gory, but we see a disturbing drawing a student did of someone who has hung themself. We see a character with insect bites all over their face and arms.

Violence: We see the shadow of a person as they have just hung themself. A couple kids get into a fight in the school cafeteria. People apparently die from some unknown cause. A person uses a knife to cut open another person's clothing (which is protecting them from something lethal); etc... Disclaimer: All reviews are based solely on the opinions of the reviewer. Most reviews are rated on how the reviewer enjoyed the film overall, not exclusively on content. However, if the content really affects the reviewer's opinion and experience of the film, it will definitely affect the reviewer's overall rating.