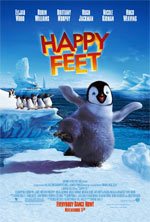 A comedy adventure, Happy Feet is set deep in Antarctica. Into the land of the Emperor penguins, where each needs a Heartsong to attract a soul mate, a penguin is born who cannot sing. Our hero Mumble (voiced by Elijah Wood), son of Memphis (voiced by Hugh Jackman) and Norma Jean (voiced by Nicole Kidman), is the worst singer in the world... however, as it happens, he is a brilliant tap dancer! (from MovieWeb.com)

Happy Feet brings the world of penguins to life on the big screen through breathtaking computer animation like never seen before. The film merges comedy and drama with contemporary and classic songs to craft a film aimed at audiences of all ages. But while Happy Feet excels on visual and even comedic levels, the story's themes rob the movie of the lightheartedness a film like this needs to stand appeal to a broad audience.

Happy Feet follows the story of an Emperor penguin named Mumble who is born with an instinctive love for dancing. Mumble is immediately met with rejection from the Emperor penguin community when he is discovered to have no ability to sing at all -- which is the only acceptable way for an Emperor penguin to woo their mate. Happy Feet then just seems to become your predictable outcast-turned-hero as Mumble embraces his dance-prone "happy feet" despite being exiled because of them. This produces one of the flick's most preachy themes of acceptance of differences, delivering the message rather heavy-handedly. Also, when famine strikes the colony of penguins because fish, their largest source of food, has become scarce, and the elder penguins are quick to blame Mumble's defiance as a cause to anger their great penguin god (?!) who apparently would withold their food from them because of it. This leads the ousted Mumble to seek out the true cause of the famine, which of course, is humans. This then launches into a detailed and long-running guilt trip on us the viewer (being that we're human, of course), aiming to make us feel as guilty about this realistic problem as possible. And the tradition and close-minded elders take an almost church elder stance on this dance revolution, bringing Footloose to mind, while piquing our curiousity as to just what kind of point the filmmakers are trying to make about the church or its acceptance of an "alternative" way of living? For a family film, I don't see why it's so necessary to hit us over the head with such messages, and frankly, I rather they be left out of my entertainment. I might expect such things from documentary like March Of The Penguins, but not a cartoon movie for kids called "Happy Feet."

The film takes the fact penguins "sing" to each other quite literally, offering refaced versions of popular songs, with one of the standout transformations being the rather inappropriate "Let's Talk About Eggs." I'd hate to be there when the children first hear Salt N Pepa's original "Let's Talk About Sex" and the parents have to explain that one. But Happy Feet is also as clever as it is strangely random, giving Mumble parents like Memphis - voiced by Hugh Jackman, and Norma Jean - voiced by Nicole Kidman, who carry on Elvis and Marilyn Monroe voice impressions throughout the entire film. It's bizarre but also quite different. My favorite aspect of Happy Feet, however, is Robin Williams' brilliantly voiced character Ramon, and his fellow buddies, the Adelie Amigos. Williams and his pals offer the funniest moments, lightening up the mood aplenty (and necessarily so), but even their comedic genius isn't enough to rescue the film. A lot of it just feels familiar and tired, and it just doesn't help that it tries too hard to push its messages on the viewers.

Aside from the Adelie Amigos, the visuals are a thing of beauty in Happy Feet. The animation is first-rate, and the characters are often adorable and lifelike because of it. Also, the voice cast is perfect. Watching some animated flicks can prove that a mediocre or effortless voice cast can hinder the film (check out pretty much any character besides the main few in Ice Age: The Meltdown to see what I mean). Regardless of if you like the movie or not, the voice talent is spot-on in Happy Feet.

Overall, I left Happy Feet disappointed and feeling a bit gypped. Beautiful visuals and a stellar voice cast keep Happy Feet bobbing in the icy water, but it isn't enough to keep the film afloat for too long. Perhaps if the attempt at instilling young viewers with a passion for the environment and diverse lifestyles was abandoned, the movie wouldn't suffer as badly as a beached whale. But, sadly, that isn't the case here. Skip Happy Feet; rent Over The Hedge instead.

Sex/Nudity: There is some suggestive comments made from the Adelie Amigos; Some lyrics are a bit suggestive or sensual ("I'll make love to you, if you want me to", etc); Mumble and Gloria slip and slide on the ice and land in positions that could be taken as sexual positions, but nothing happens and Mumble apologizes for his clumsiness.

Violence: The penguins are chased by whales and seals, stumble on the ice, etc Disclaimer: All reviews are based solely on the opinions of the reviewer. Most reviews are rated on how the reviewer enjoyed the film overall, not exclusively on content. However, if the content really affects the reviewer's opinion and experience of the film, it will definitely affect the reviewer's overall rating.