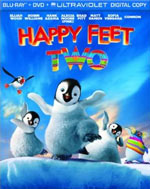 - for some rude humor and mild peril.

Mumble, The Master of Tap, has a problem. His tiny son, Erik, is choreo-phobic and lacks the talent of all the other penguins. Reluctant to dance, Erik runs away and encounters The Mighty Sven - a penguin who can fly! Mumble has no hope of competing with this charismatic new role model.

Things go from bad to worse for Mumble when the world is shaken by powerful forces. Erik learns of his father's guts and grit as Mumble brings together the penguin nations and all manner of fabulous creatures - from tiny Krills to giant Elephant Seals - to put things right. (from Warner Bros.)

When it comes to sequels, movie studios are too-often greenlighting unnecessary ones. While the 2006 animated penguin musical, Happy Feet, was somewhat of a success, it didn't seem at all like the kind of movie that needed a sequel... or had even been set up for one. So when Happy Feet Two came to fruition, I couldn't help but wonder... why?

After watching this penguin movie sequel, the question still stands. There's little present in Happy Feet Two to justify its existence. It continues the music-centric plot device that involves most of the characters from the first film, except this time around, baby Mumble is now a father to his own little guy, Erik, trying to figure out where he fits in life. That alone brings a sense of been-there, done-that, but this only worsens as the plot progresses to include a character that leads the masses to believe he's something that he isn't, only for them to find that out at the most inopportune moment (Rango, anyone? Even Chicken Run, too). In addition to that, we have somewhat of a "continental shift" where a large block of ice crashes into the home of the penguins, trapping them in a valley that threatens their very existence--which just feels too much like Ice Age 2. Of course, dancing and singing become a big part of the plot--whether it makes sense or not--and if you didn't enjoy that aspect of the first film, you're going to really hate it here (as did I). Hip hop, rap, pop, R&B, and, yes, opera are all here. Again, that's fine if that's your thing I suppose, but it does often feel a bit out of place in a kids film--particularly the hip-shaking hip hop tunes (and it feels pretty forced for penguins).

One thing that irked me about the first film is reused for this installment as well. There was a sequence that blended real-life human actors with the animated CG elements of this film. It was a means to try to ground Happy Feet in a sense of reality, but the problem is that the universe that the characters of Happy Feet reside in are much too cartoony to possibly pass off the notion that they coexist with us in the world as we know it. But just like in the first Happy Feet film, the humans are painted as environmental demons who eat birds and drown others in oil spills (Sure, people are often careless with how they take care of the environment, but I don't see the point in trying to make casual moviegoers and children feel responsible for things happening in the artic that we have no control over. It's important to be conscious of how we care--or don't care--for our planet, but guilt-tripping kids through movies isn't the way to do it. Many films have agendas and messages they hope to get across, but these Happy Feet films have been anything but subtle about it). Apparently director George Miller decided somewhere between completing Happy Feet and crafting Happy Feet Two that adding MORE live action footage to the film was a great idea. Sadly, it didn't work then and it works even less now. It's also very evident that these humans aren't good actors and while that gives good reason for them to never utter a single word, it just feels bizarrely out of place to include non-speaking humans in roles that never display any kind of real merit or redemption. It just makes no sense to blend real actors with animation in a film where animated penguins are singing and dancing to songs like "Ice Ice Baby" and we're supposed to accept that this merger of two worlds is sensical.

I remember really liking Robin Williams' characters in the first installment, but here even he just doesn't add much to the film. Instead, Matt Damon and Brad Pitt appear as two brand new characters: a pair of krill who decide to leave their swarm together to set out and explore the world. Much like how Scrat is a mostly unrelated character in the Ice Age films and exists for mere comic relief brilliance, Will the Krill and Bill the Krill steal each scene they appear in. Unfortunately, soon after I began feeling like the movie should lose the penguin thing and just focus on these guys, they go much too far with the Will and Bill storyline, adding unnecessary drama (like a break-up in a romantic comedy) and merge them with the film's main plot in an effort to validate their inclusion at all, but (like just about everything else in the movie) it feels forced and unnecessary to do so. Since Happy Feet Two was also created in 3D, watching it in 2D makes all of the gratuitous 3D moments glaringly obvious. They're not only frequent, but they're constant, and the krill, seals and penguins are often leaping into the screen at you. I suppose it would be fun in a 3D experience, but in 2D, it does get tiresome after a while.

The content for Happy Feet Two is certainly worthy of its PG rating. The "mild peril" cited in the MPAA rating mostly involves the iceberg that traps the penguins in a valley. There's quite a bit of talk of them dying and not making it out alive, while another scene involves a large flock of skua birds that begin attacking the penguins like vultures. Also, a large elephant seal is likely to scare some children as he menaces some little penguins with Mumble, but there isn't any graphic content due to any of the violence--and it doesn't seem like anyone actually ever dies in the film. There isn't any profanity that is snuck into the mix, but there is an awkward moment where the large elephant seal tells Mumble to take Erik and "Fluff off" which is an obvious and undisguised substitute for the F word. Lastly, things seem to get a little weird between Will the Krill and Bill the Krill when Bill asks Will if he wants to start a family. Will reminds him that they're both males and Bill tells him that they could adopt. It's obviously all played for laughs, but it's an awkward moment to include in a family film and the unneeded additional drama between the pair robs some of the otherwise ridiculous fun that these two bring to this otherwise lackluster movie.

Sequelitis plagues Happy Feet Two from the beginning, but there are just enough funny and fun moments in the movie to save it from being a complete waste of time. However, the fact does remain that there are far better animated films out there that make Happy Feet Two feel like a direct-to-DVD release (and it probably should have been). Some kids will love it--especially those interested in dance and pop music--but adults probably won't enjoy it as much as some of the better family films available today. Skip Happy Feet Two and check out Kung Fu Panda 2 instead to see a sequel done right.

Sex/Nudity: Ramone spots a vuluptuous female penguin named Carmen and says, "You. Me. Beautiful egg. Now." and she replies "Fat chance;" Bill The Krill suggests he and Will start a family, to which Will reminds him they're both males. Bill suggests they could adopt and Will shuts him down and swims away. Bill then complains that there are plenty of krill out there that would be happy to have him as their partner.

Vulgarity/Language: Beach Master tells Mumbles to take his son and "Fluff off."

Violence: Erik slips and falls while dancing and ends up with his head in the ground. And we see some pee squirt out of his bottom; A wave wipes out Ramone; The children help Atticus stop chewing on his own flipper; Some sharks chase after Ramone briefly, snapping at him; Ramone gets briefly trampled by fellow penguins in a crowd; We see a flashback of polar bears swiping at and trying to snag a penguin; We see a tanker on fire and a penguin drowning in oil (before being saved); A gang of penguins tackle Mumbles; The Beach Master pushes the penguins around, tossing them, and then falls when the bridge starts to break free. Beach Master tries to climb back up and the ice gives way and he falls into darkness, hitting his head on the side on the way down (But he's still alive); Will The Krill tries to bite into a large beast but can't. Mumbles, meanwhile, tries to antagonize it in an attempt to free Beach Master and when Will bites into it, it lunges at Mumbles and chases him through the water; A swarm of skuas begin menacing trapped penguins where skuas hit and peck penguins while the penguins hit back; Bill smacks Will. Disclaimer: All reviews are based solely on the opinions of the reviewer. Most reviews are rated on how the reviewer enjoyed the film overall, not exclusively on content. However, if the content really affects the reviewer's opinion and experience of the film, it will definitely affect the reviewer's overall rating.