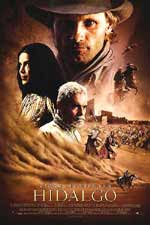 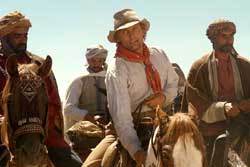 Based on the true story of the greatest long-distance horse race ever run, Hidalgo is an epic action-adventure and one man's journey of personal redemption. Held yearly for centuries, the Ocean of Fire - a 3,000 mile survival race across the Arabian Desert - was a challenge restricted to the finest Arabian horses ever bred, the purest and noblest lines, owned by the greatest royal families. In 1890, a wealthy Sheik invited an American and his horse to enter the race for the first time. Frank T. Hopkins (Viggo Mortensen) was a cowboy and dispatch rider for the US cavalry who had once been billed as the greatest rider the West had ever known. The Sheik (OmarSharif) would put his claim to the test, pitting the American cowboy and his mustang, Hidalgo, against the world's greatest Arabian horses and Bedouin riders - some of whom were determined to prevent the foreigner from finishing the race. For Frank, the Ocean of Fire becomes not only a matter of pride and honor, but a race for his very survival as he and his horse, Hidalgo, attempt the impossible.

Viggo Mortensen isn't new to acting. Mortensen has been making films since the mid-80's, but has only been spotlighted since his role as Aragorn in the Lord Of The Rings trilogy. It's a shame because Mortensen is a wonderful actor and a pleasure to watch on screen. Director Joe Johnston seemed to think so also when he signed up Viggo before ever seeing his performances in Lord Of The Rings. In Hidalgo, Viggo embodies Frank Hopkins perfectly and, with the help of Johnston, paints a well-rounded portrait of the character. The prominent supporting characters were all fleshed out very well through the film's paced length. Johnston took his time with the background of the characters, choosing not to rush through the story to focus on the action. Instead, the action enhanced the story instead of making the story. The horse was a wonderful character as well, having more personality naturally than one would expect from an animal like that.

Hidalgo is set mostly in the desert and is beautifully shot with vibrant colors and cinematography. The action and overall feel of the movie offers a mix of many films before it from The Mummy to The Four Feathers to Indiana Jones, and yet still manages to feel fresh and unique. 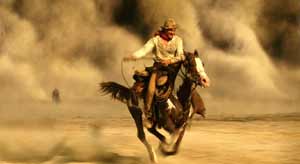 The acting is solid and the story is interesting enough to hold the viewer's attention even as the film might struggle through a few slower moments. The film shows the Native American and Muslim cultures in positive lights, focusing on the spirituality of the Native Americans while ironically showing the goodness of a Muslim Sheik. This is all well and good, just an odd thing to see in the day in age we're living in right now. The Native American spirituality which is contrary to the Christian belief system may be a cause of concern for some. However, if you're willing to dismiss some of the moments (i.e. dead Native Americans appearing to Frank in the desert to encourage him), then there ultimately shouldn't be a problem. Some might like to know about it before going into it, however (as that angle took me by surprise).

The story plays out well, following Hopkins from the United States to the Arabian desert as he takes his prized horse and friend Hidalgo out for one last tremendous horse race. It's a brutal trek and Johnston makes no bones about showing bits and pieces of the brutality which make this quite a violent film at times. When Frank is meeting with the Sheik, some raiders attack and in the process, one is beheaded (seen from behind), and we see the back of the head (which is still wearing a desert hat that covers the entire head -- so we just see the hat) as it flies from the body and lands on the ground. In other scenes, people are slashed with swords (not gory or bloody), and in several instances stabbed by large spears (and in one instance, impaled). While a lot of the scenes aren't graphic, it is really violent, making this hardly a film to take the kids too. Possibly the roughest scene to watch (possible spoiler ahead!) is when Hidalgo and Frank fall into a pit trap and Hidalgo's skin is impaled by a spear, leading Frank to take a knife and cut away at the skin to free his horse (and we later see the wound as he tried to burn it to seal it). The other content in the film is mild and includes a few minor instances of innuendo (and a woman tries to come on to Frank, but nothing happens), and just a couple minor curse words.

Hidalgo is a great story that, although hindered by a slow pace at times, focuses enough attention on its story to make it a worthwhile venture. The film is excessively violent at times which is also a drawback, and something parents will want to consider when seeing it. It's definitely not a movie recommended for a younger audience. Viggo Mortensen's performance and sheer presence makes this movie which could very well continue his ascent as a rising star.

Sex/Nudity: A few double meanings are made. The Sheik thinks Frank had tried sleeping with his daughter and prepares to have his genitals removed as punishment (we see some related instruments), but nothing happens. A woman tries to persuade Frank to drop out of the race and starts to come on to him, but nothing happens and he leaves.

Alcohol/Drugs: The Sheik smokes from a bong-like device. Frank drinks to excess several times in the film.

Blood/Gore: A fight leaves Frank with a black eye. The Sheik beheads a raider (seen from behind), and we see the back of the head (which is still wearing a desert hat that covers the entire head -- so we just see the hat) as it flies from the body and lands on the ground. A man then freaks out and kicks the covered, bloodless head away. Although not gory or bloody, we see Frank bite into a locust. We see a tiny bit of blood on Frank's sleeve after being attacked. Hidalgo and Frank fall into a pit trap and Hidalgo's skin is impaled by a spear, leading Frank to take a knife and cut away at the skin to free his horse (we see the cutting and the gory results) We later see the wound as Frank tries to burn it to seal it. A man falls into a pit trap where he is impaled by spears. We briefly see the spears sticking through his body as well as a small amount of blood around the wounds. We see a man shot to death, with a brief glimpse of a few bullet holes appearing in his shirt as he is shot (and possibly a little bit of blood). We see some blood coming from Hidalgo's nose. We see some scrapes on Frank's face. Katib has some blood on his hand after a bullet grazes him there.

Violence: Heavy. A lot of sword play with a character decapitated, and many being non-graphically sliced and stabbed. A man is shot to death. A horse falls and breaks its leg, etc (see also Blood/Gore) Disclaimer: All reviews are based solely on the opinions of the reviewer. Most reviews are rated on how the reviewer enjoyed the film overall, not exclusively on content. However, if the content really affects the reviewer's opinion and experience of the film, it will definitely affect the reviewer's overall rating.