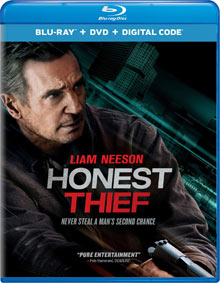 Meticulous thief Tom Carter (Neeson) has stolen $9 million from small-town banks while keeping his identity a secret. But after he falls in love with the bubbly Annie (Walsh), Tom decides to come clean about his criminal past, only to be double-crossed by two ruthless FBI agents. Packed with action, Honest Thief is a tale of redemption and one man's mission to make things right for the sake of love. (from Universal Pictures Home Entertainment) 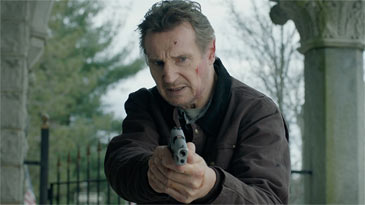 Let's face it, sometimes retirements don't stick. Just ask Liam Neeson who, in 2017, announced he was done with making action films. He attributed his mid-sixties age for the reason why he was done fighting off bad guys, but as he stated in a more recent interview, he's "got a few fights left" in him. Honest Thief is one of them, a solid B-movie action film that revolves around a former bank robber trying to hang up his blow torch, but gets double-crossed by a couple greedy FBI agents. It's classic post-Taken Neeson action fare, but leans more on the better side than some others.

Honest Thief does tend to be more predictable than not, but it remains to be a well-acted thriller that will keep the less critical moviewatcher on the edge of their seat. The big difference that makes this movie stand out from other similar B-movies like it is its solid cast and likable performances. Neeson and costar/love interest Kate Walsh are excellent together, and you just can't help but enjoy seeing them share scenes together. It makes sense why he'd want to quit robbing banks and come clean just for her. (As opposed to some movies where you just can't see any sense as to why the protagonist is willing to do anything at all for their love interest -- usually due to a complete lack of chemistry between the two.) I enjoyed seeing Jeffrey Donovan in something during his post-Burn Notice years, even if his character is a bit cliche. It's kind of hard to not think of Tommy Lee Jones' character from The Fugitive in any movie where an honest government agent or cop is trying to track down the wrongfully accused protagonist. Movies that range anywhere from Chain Reaction to Mission: Impossible to The Bourne Ultimatum all have a wrongfully accused main character trying to convince the law they're innocent, so it's hardly a fresh idea. However, Honest Thief is enjoyable regardless, even though some of it feels a bit too familiar at times.

Mark Williams' makes good use of the film's lean hour-and-forty minutes to set up the story, build his characters, and then keep things moving forward at a quick pace. The main story revolves around how Neeson's character, Tom Carter, has been sitting on millions of dollars he stoles throughout his years as a bank robber, and after meeting Kate Walsh's Annie, he wants to turn himself in so he can live a guilt-free life with her. Jai Courtney and Anthony Ramos are our film's main antagonists, who decide it'd make more sense to take Carter's stolen millions and keep it for themselves. In the process, they try to frame Carter and even turn him into a fugitive, all out of greed and a series of really bad choices. It seems a little farfetched at times that Courtney's FBI agent Nivens would do some of the things he does simply out of greed, but it works well enough for the story to give Carter an adequate foil. Otherwise, Williams tries to keep things relatively grounded. There are a few scenes - like characters dropping out of a hotel window onto an awning and then to the ground, or a character surviving a brutal blow to the head - that definitely stretch the believability of things, but the movie otherwise does a pretty good job not going too over the top with things to help it feel more real.

The content is definitely of the PG-13 variety. Jai Courtney shouts the film's lone "F" word, and there's an assortment of other language in the film, although it isn't pervasive throughout. There is no sexual content (although the main character Tom asks his girlfriend of one year to move in with him), with the rest of the content to be wary about being violence. There are several scenes with shootings, some with fatal results. There's also some blood throughout - mostly scrapes and cuts after fights, but other scenes show it on the clothing of those who have been shot. None of it is excessive, however. Still, it's a tense and violent thriller, so I highly recommend exercising caution before watching, especially for more sensitive viewers. Thematically, the film's hero is also a thief, so while he's chosen to come clean and give up a life of crime, we're literally rooting for a guy who has robbed millions from banks. Still, Neeson plays Carter with heart and sincerity, and I personally like a good redemption story.

Honest Thief is hardly a masterpiece, but for what it is - a semi-predictable but well-executed thriller - it's enjoyable and a cut above the usual B-movie action film, mostly due to a great cast and performances and effective film direction.


Honest Thief is available on Blu-Ray/DVD/Digital, DVD, and through the usual digital providers (including in 4K, digitally).

Along with the feature film, the Blu-Ray disc includes no special features at all, which is surprising. Perhaps it can be attributed to being rushed out on disc after a short stint in theaters, but the lack of even a short promo or a trailer is rather surprising. (Perhaps they plan on adding special features to the digital copy down the road?) - John DiBiase, (reviewed: 12/26/20)

Sex/Nudity: None, but Tom does ask Annie to move in with him after a year of dating (and they share some playful flirting and passionate kisses).

Alcohol/Drugs: Annie is holding a bottle of wine and drinks from it;

Violence: Some spoilers ahead: The film opens with Carter blowing open a safe door; A couple men hold a gun on an unarmed man. Another man walks in on the situation and is shot twice, killing him. The three remaining men fight, with two of them struggling over a gun. The two fall out a hotel window and crash onto an awning below and then the street underneath it. One of the men gets up and hits the other man in the face with the butt of the gun; We see the dead body that was shot earlier with some blood on their shirt; A man throws a woman into a shelf and then hits her. She stabs him in the leg with scissors. He pulls it out in agony. She hits him with tape dispenser and they struggle for a bit before and he throws her head into the counter, knocking her unconscious; The man who has the wound from the scissors has blood all over hands and pants; During a car chase, a pickup truck crashes into a cop car; Carter backs a van into the front of a pursuing car, crushing the front of it. He rams it again to push it. A lot of gunfire is then exchanged between the two of them; Agent Myers and Tom fight hard on the street with each of them punching the other in the face; A man attacks another man with a bat. The attacker throws the victim against the wall and nearly chokes him. He then hits him in the stomach with the end of the bat and leaves; A house explodes in flames; Two men fight and struggle, with one of them shooting the other point-blank range in the side, killing them. There's then a shootout with another character, with one of them being shot. We then see a longer view of the dead body of the first victim (with some blood); We hear about there being a bomb in a car, but it doesn't go off. Disclaimer: All reviews are based solely on the opinions of the reviewer. Most reviews are rated on how the reviewer enjoyed the film overall, not exclusively on content. However, if the content really affects the reviewer's opinion and experience of the film, it will definitely affect the reviewer's overall rating.