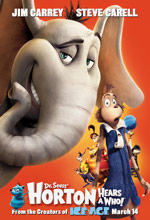 Horton Hears A Who! 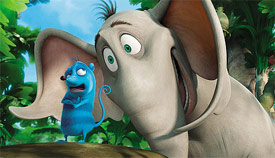 The makers of ICE AGE, and comedy giants Jim Carrey and Steve Carell, bring to life DR. SEUSS' beloved HORTON HEARS A WHO. An imaginative elephant named Horton (Carrey) hears a faint cry for help coming from a tiny speck of dust floating through the air. Although Horton doesn't know it yet, that speck houses an entire city named Who-ville, inhabited by the microscopic Whos, led by the Mayor (Carell). Despite being ridiculed and threatened by his neighbors who think he has lost his mind, Horton is determined to save the particle...because "a person's a person no matter how small."
(from MovieWeb.com)

In 2000, director Ron Howard brought Whoville to life when he created the live action film How The Grinch Stole Christmas. Unfortunately, inflating the short story to an hour and a half filled the movie with plenty of unnecessary fluff that was over-the-top silly and, in many cases, just plain stupid. Now, in 2008, Fox Animation - the company that first got into the game with Ice Age - brings another Dr. Seuss tale to the screen - Horton Hears A Who!. This time around, however, the film is presented in vibrant and expressive computer animation - unlike many other animated films out today - and plays out considerably better than its Grinch predecessor, or its über-poor follow-up, Cat In The Hat.

More than a few times while watching Horton Hears A Who!, I couldn't help but marvel at the quality of animation. As we'd watch Horton splash about in a small pond or stream, the water glistened and flowed as real as could be. If it were not for the characterizations being wonderfully cartoony, it would have been tempting to get lost in the film. However, the animation does tend to still side on brilliant detail - from Vlad the vulture's feathers to the fur of the kangaroo to the veins in their bloodshot eyes - it may be one of the first films in awhile to really seem to give Pixar a bit of a run for their money (although, some of those scenes in the Wall·E trailer are breathtaking). The clarity of computer generated animation is getting almost eerily crisp. 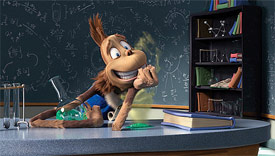 I really enjoyed Jim Carrey's debut as the voice of an animated character in a feature film as Horton the elephant. Carrey had first been signed up to do DreamWorks' Over The Hedge which he later dropped out of, and I'd always been disappointed by that (although I do love that film as-is). Also, it was great to see (er... hear?) him team up once again with Bruce Almighty co-star Steve Carell who plays the Mayor of Whoville here. Carell has a fantastic voice for animation (who coincidentally actually voiced Hammy in Over The Hedge) and he was absolutely perfect for the spastic Mayor. And although a lot of Carrey and Carell's characteristic humor was piped into their characters, it wasn't overdone. There were a few moments where Horton was getting a bit carried away that could have used a slight toning down, but the filmmakers seemed to allow it within reason. Unfortunately, there is at least one particular sequence a bit before the film's middle where it takes a sorely misplaced sidestep into Horton's imagination as he envisions himself as some kind of animé superhero. At this point, the animation abruptly changes to 2-D animé as we see a Japanese-styled sequence where Horton daydreams of himself saving the day. It'd be funnier if the whole movie were as completely random as that moment, but unfortunately the overlong moment doesn't fit the tone of the overall film.

Content is wonderfully mild considering the trend to lean a lot of animated features towards adults these days. No language is used beyond the occasional "idiot" or "moron" or "boob" (as another word for "idiot"), and although there is some violence, there isn't anything very graphic. One scene involves the Mayor going for a root canal, but he's accidentally stuck in the arm with the needle instead (which is one of the funnier moments). Also, Vlad the vulture has some pretty menacing moments that may be a bit too dark or scary for kids - including a scene near the end that is a bit intense which involves an angry mob. The upside is that the story can be taken as having a rather pro-life theme. The whole "a person is a person no matter how small" theme is very strong and it's nice to see a film encouraging this whether it was intended to have such a message or not. The story also carries an interesting theme about faith and believing in things beyond what we can just taste, see, hear, or touch. It may be a good discussion starter for the young ones as well.

While the tone of the film was slightly indecisive, Horton Hears A Who! proves to be a tame and fun theatrical outing. With beautiful animation, fantastic voice acting, and a timeless child's tale, Horton Hears A Who! may not be the best animated film you'll see all year, but it's bound to be a fun time regardless.

Blood/Gore: We see a staple in the Mayor's forehead on two occasions (no blood); A dentist's needle sticks into the Mayor's arm by accident, but there's no blood.

Violence: Mostly comedic violence. We see a staple in the Mayor's forehead on two occasions (no blood); A dentist's needle sticks into the Mayor's arm by accident, but there's no blood; Horton falls from a great distance and lands in snow; Vlad chokes on a bone but chokes it back up (with flem showing on it); There's some comedic violence like things falling on or hitting the Mayor or other characters, played for laughs; Potential Spoiler Warning!! - Kangaroo gets all the people in the jungle to rise up against Horton for inspiring their kids to use their imagination and they threaten him to denounce the existence of the people on the speck. When he doesn't, they tie him down, stuff him into a cage and toss the clover with the speck on it toward a boiling vat to kill it (but is saved at the last second) Disclaimer: All reviews are based solely on the opinions of the reviewer. Most reviews are rated on how the reviewer enjoyed the film overall, not exclusively on content. However, if the content really affects the reviewer's opinion and experience of the film, it will definitely affect the reviewer's overall rating.