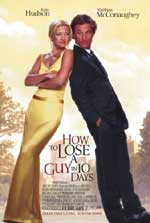 Andie Anderson (Kate Hudson), Composure Magazine's "How-To" columnist, has a very unusual assignment and a quick deadline. She has to write a firsthand account of all the things women do to drive men away... and she's got to do it in 10 days. Now she's on a mission to find her guy, get him to fall in love with her, then make all the classic dating mistakes so he'll dump her. Too bad Andie's target is ad agency man Benjamin Barry (Matthew McConaughey), who has just made a high-stakes bet with his boss he can make a woman fall in love with him in 10 days. Does a ruse relationship based on deception stand a chance in a world where everyone says they're looking for honesty?

Ah, romantic comedies. Being that I'm less than five months away from marrying my high school sweetheart of almost five years, I've come to thoroughly enjoy most upbeat "chick flicks." Granted I've grown tired of the depressing tear-jerkers where two people meant for each other meet and then one of them dies and the other is left to crawl through the remainder of their lives without purpose and meaning, but the comedies that manage to smartly mix comedy and romance are definitely enjoyable. See, there's still a problem though... Hollywood doesn't believe in abstinence while we Christians do (and should as it's Biblical), so this leaves room for sex-related comments, jokes, etc, that glorify, celebrate, or just condone acts that anyone else who knows better would consider sinful. So with How To Lose A Guy In 10 Days having a promising plot and hilarious trailer, it only seemed to make sense to catch the sneak preview of the film a week in advance...

How To Lost A Guy stars Kate Hudson and Matthew McConaughey as the deceptive duo and play the parts exceptionally well. While Hudson as Andie Anderson does a bang-up job going from sweet Andie to making his life miserable in an attempt to get rid of him, Matthew as Ben is stuck having to stay in this relationship in order to win a high-stakes campaign for his career. The result? Some pretty funny stuff. But as I began, this situation doesn't come without its problems. While he plot is interesting and the acting jobs top-notch, sex-related dialog, some language and a brief encounter bog down what otherwise would be a fantastic date flick. The brunt of the language is from a card game Andie and Ben play with his parents called "bulls**t" which requires the players to say the word to call another's bluff. One sex scene is implied as the two remove their shirts (no nudity is seen) and climb into a shower (to which the scene ends there).

So what in the world is redeemable about the movie? Junky content aside, it's a fun experience watching Ben and Andie's struggles with trying to make it to the end of their bets. There's quite a bit of believable chemistry there so when they eventually do fall in love (doi, it's a "romantic comedy"), it works beautifully. 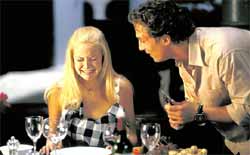 It's not the kind of relationship that works just because the premise tells you it has to, the two of them actually look good together. Story-wise, I don't really have any complaints despite what was related to content. It would have been nice to see a little more innocence to the story sexually, but those are hard to come by these days (even last year's runaway hit My Big Fat Greek Wedding was PG and had implied sex scenes before they got married). It's really irritating that society has no problem with it and feels like sex is more of a sport than anything. And it's a real shame because this movie was really good otherwise...

In summary, I thought the story and acting were great. It was fun to watch Hudson and McConaughey play off each other and they did it perfectly. Their assistants were great added comic relief and everything just worked together well to create a great romantic atmosphere with plenty of comedy to keep it light. However, due to sex-related material that includes dialog and one implied encounter, I can't recommend this movie as-is. So, as my new recommendation through personal experiences, I suggest renting it on DVD and using such editing programs as ClearPlay to cut the junk out and leave you with a much more guilt-free overall experience. It really was a great story and I'd hate that it's been tainted by some crude dialog or premarital affairs.

Sex/Nudity: Mostly dialog-related. Many instances of innuendo or references to sex. Ben and Andie go back to Ben's place and as she's on the phone insisting with her colleague that she won't be sleeping with him, Ben is choosing music and first selects a song that contains the lyrics "it's getting hot in here, so take off all your clothes," but decides it's not a one night stand and selects something mellower. Later, Andie sits on his bed and invites him over, but he declines and she goes over to where he's standing and they kiss passionately before falling down on the bed but they decide it's too fast and she leaves. In another scene Andie comes on to Ben as he's sitting on the couch and undoes his shirt before asking if "Princess Sofia wants to come out and play" (meaning his privates). He gets furious about her naming it that and suggests some more manly ones, which they discuss, before the scene ends there and nothing happens between them. In another scene, Ben finds his bathroom cabinet loaded completely with feminine products. The two go see a couples therapist who asks them about their sex life to which they admit they haven't done anything yet. Ben complains about her naming his privates and related dialog is exchanged. In another scene, Andie gets ready to take a shower but doesn't get in as she and Ben begin kissing. He removes his shirt and pulls off hers (we don't see anything) and hear other articles of clothing being removed before the two climb into the shower together and the scene ends immediately.

Alcohol/Drugs: A lot of beer drinking and wine, etc

Violence: A man punches Ben in the face. Disclaimer: All reviews are based solely on the opinions of the reviewer. Most reviews are rated on how the reviewer enjoyed the film overall, not exclusively on content. However, if the content really affects the reviewer's opinion and experience of the film, it will definitely affect the reviewer's overall rating.