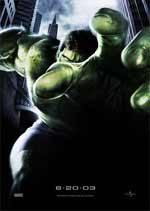 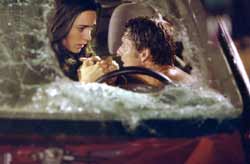 Scientist Bruce Banner (Eric Bana) has, to put it mildly, anger management issues. His quiet life as a brilliant researcher working with cutting edge genetic technology conceals a nearly forgotten and painful past. His ex-girlfriend and equally brilliant fellow researcher, Betty Ross \ (Jennifer Connelly), has tired of Bruces cordoned off emotional terrain and resigns herself to remaining an interested onlooker to his quiet life. After an experiment gone wrong, Banner begins to feel some kind of a presence within, a stranger who feels familiar, slightly dangerous and yet darkly attractive. All the while, a massive creaturea rampaging, impossibly strong being who comes to be known as the Hulkcontinues its sporadic appearances, cutting a swath of destruction, leaving Banners lab in shambles and his house with blown out walls. The military is engaged, led by Bettys father, General Thunderbolt Ross (Sam Elliot), along with rival researcher Glenn Talbot (Josh Lucas), and both personal vendettas and familial ties come into play, heightening the danger and raising the stakes in the escalating emergency.

Superhero films have quickly become their own genre of films. And with last year's Spider-Man blockbuster hit, the bar has been raised on what superhero fans can expect from a film about their favorite hero. 2003 has already seen the release of the grittier and under par Daredevil the huge and exciting X-Men 2 and now the massive Hulk up to the plate. While the more successful superhero flicks nicely blend memorable and exciting action and fight sequences with humor and lovable characters, the more forgetable films don't. So, of course, this brings up the inevitable question. Where does Hulk come into play?

Little known actor Eric Bana (Black Hawk Down, Finding Nemo) offers his restrained acting talents as the calm and curious Bruce Banner. While I personally felt I could relate enough to his nature, I have to agree with most people who felt his character wasn't especially likable. Nor did you care a whole lot what might happen to him. Director Ang Lee offered plenty of character development, but they weren't especially likable characters. Basically if the entire cast of characters blew up in one large devastating explosion, would anyone in the audience shed a tear? The point is, as the audience, it's our job to care and the director's job to make us care. While I'm more prone to buying most main characters handed to me to like, I know when I see a job done that could have been done a little better or taken a little further. While I just look at Banner here as "that's just the way he is and how Lee wanted us to see him", Lee could have built Banner up more as a victim of his father's work than anything. 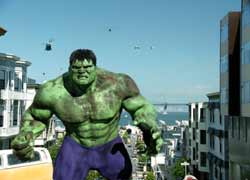 I enjoyed and appreciated the overall feel and mood Lee was going for, but I felt he lost his way for the final climactic brawl in the film. By the time this rolled around the quasi-realistic vibe of the film was completely traded for off-the-wall comic book action ambiguity. Now don't get me wrong, I'm all about comic books, but when a film gets so bizarre you're starting to question whether you're awake or having a nightmare, you know something's not right. Lee also utilized a unique style for his filmmaking in which he featured split scenes several times and pictures within pictures to give a comic book feel for the audience. Sadly, this seldom really worked but it was still fun to watch at times.

The beautiful Jennifer Connelly was good in her part but it just didn't seem like quite the fit for an Oscar-winning actress. She did well but her part didn't really demand much from her. Nick Nolte, although I'm far from a fan of his, did fantastic as Banner's insane father. Regarding content, only a few swear words are present as well as a brief shot of Bruce's bare butt when he converts back from being the Hulk and finally the violence is seldom graphic with only one really gross instance being focused upon.

All in all, I did enjoy this film. It wasn't perfect and it wasn't Spider-Man or X-2, but it was entertaining enough to be memorable (even if for a few negative reasons as well).

Sex/Nudity: After the Hulk converts back to Bruce Banner, we briefly see Bruce's bare butt.

Alcohol/Drugs: David has a drink; We see Bruce and Betty with a drink.

Blood/Gore: We see a frog begin leaking fluid and expand before we briefly see it explode (from being tested on... we see a quick shot of it later in a flashback). We see blood filling a vial being taken from Bruce. A man's hand undergoes several transformations after an experiment -- we see a large glob of blood coagulate in the person's palm before the hand goes through some grotesque changes. We see a wound heal on the Hulk.

Violence: Lots. When the Hulk flips out, he goes on a violence rampage, etc. Lots of guns firing / explosions. The Hulk destroys a lot of things and injures some people. Disclaimer: All reviews are based solely on the opinions of the reviewer. Most reviews are rated on how the reviewer enjoyed the film overall, not exclusively on content. However, if the content really affects the reviewer's opinion and experience of the film, it will definitely affect the reviewer's overall rating.