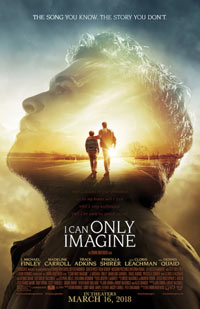 I Can Only Imagine

It's the song that brings ultimate hope to so many  often in the midst of life's most challenging moments. Amazingly, the song was written in mere minutes by MercyMe lead singer Bart Millard. In reality, those lyrics took a lifetime to craft.

Although he found faith at a young age, life wasn't easy for Bart. He leaned into an active imagination and his love of music as escapes from a troubled home life. As he grew older, Bart turned to football in hopes of somehow connecting with his abusive father. But a career-ending injury-combined with the vision of a teacher who saw unlimited potential-set Bart on a musical pathway.

Chasing a dream while running from broken relationships with his father and Shannon, his childhood sweetheart, Bart hits the road in an old, decrepit tour bus with his new band MercyMe-named for his grandmother's favorite expression. With the guidance of a grizzled music-industry insider, the band begins a journey none of them could ever have imagined. (from icanonlyimagine.com)

When a phenomenal tune such as "I Can Only Imagine" became such a massive hit almost 2 decades ago, it calls for such a fascinating showcase that leads to the formation of the band, MercyMe, and more importantly, the narrative behind the lyrics of this beloved song. Biographical films about Christian artists, for the most part, have been absent, other than Ragamuffin (2014) which conveyed the life of Rich Mullins. I usually like watching movies that take you into the past and explain how an event came into fruition like, Jobs (2013), The Social Network (2010), or The Founder (2016). I always anticipate that the story and the actors will hopefully do justice to a feel good true story.

The movie opens up with Amy Grant interviewing Bart Millard regarding the songwriting for his song "I Can Only Imagine." Amy accentuates that this song was the result of a lifetime. After this brief scene, the movie begins with Bart's early preteen childhood at about the age of 13. We see the struggle that Bart has to deal with while venturing his pursuits and creativity while growing up. His mother appears to be more caring while the father (played by Dennis Quaid) displays a far more disapproving side toward the child's interests. The movie does a very good job of portraying the hard life that Bart had with his family until his college days.

Bart Millard is a very innocent, quiet, and peaceful teen where we see him have his first experience in listening to music by purchasing some cassettes (Amy Grant) at a local store. We see him go through a major disappointment and a life turning event between high school and college. His talent is not fully realized until he begins college and one of his teachers sees all of the potential which makes her want to push Bart further. Bart's father initially wants nothing to do with his son and sees him as a failure. As Bart is trying his best to pursue his dreams, he's not fully prepared unless he makes an effort to take care of problems that he tries his best to ignore. In many ways, Michael Finley's performance as Bart is very reminiscent of Sean Astin in Rudy (1993). He presents himself as this very determined youth chasing his dreams and yet, at the same time, is not entirely confident of himself. Much like the scene in Rudy where he talks about how everyone always said he would never be a football player at Notre Dame, Bart expresses how frustrated he is when people offer negative feedback when he's trying to follow his goals during a tryout that takes place with his band.

I Can Only Imagine moves at a very good pace and never seems to linger much during scenes which can often plague movies of this type. Some of the actors are very likeable, and one that really stands out is Nicole Duport who plays Amy Grant. You really get a sense that this is Amy Grant because she delivers the presence with convincible mannerisms, speech, as well as appearance. Although Jake B. Miller turns in a decent effort, he doesn't seem to capture the same believability in portraying Michael W. Smith. The only reason I knew it was supposed to be Michael W. Smith was due to the clothing and communication with Amy Grant. Another clear standout in the film will obviously be Dennis Quaid who plays as Bart's Father. After seeing the movie, I don't think many could handle this role as well as Dennis. He brings a sense of honesty to the role whether he's outraged, sad, or compassionate; Dennis has proven himself to be a very versatile actor in films like Great Balls of Fire! (1989), Frequency (2000), and In Good Company (2004). Though Bart's grandmother is a minor character in the movie, you will need to pay attention as she provides two key components in the movie. Many may remember her as the grandmother in television sitcom Malcolm in the Middle and, more recently, Raising Hope.

Some films with an inspirational message such as this one may appear to be limited to only Christians. However, after seeing this picture, I consider this is a movie that can be enjoyed by most viewers as it illustrates many moments that can connect to anyone in the audience. I Can Only Imagine does contain some very emotional scenes towards the end of the film that deal with bereavement, however, it does provide some effective ways in which the situation is handled in an encouraging way. The film does a remarkable task of providing a story that makes one better understand the meaning behind the song of the same name, while delving into the life of vocalist/songwriter Bart Millard: his relationship with his father, his girlfriend (and later, wife), his band MercyMe, and most importantly, his relationship with God.

Vulgarity/Language: There are scenes where the father calls and directs very negative thoughts towards the son; however, there was no inappropriate language.

Alcohol/Drugs: The father is in some scenes where he is intoxicated from drinking which affect his judgment and anger.

Blood/Gore: There is some blood exposed on an individual's head after being struck by a plate from the kitchen.

Violence: There are some violent scenes that take place involving the family. One takes place when the father gets in argument with the mother. We don't see the scene; however, the sounds of crashing and hitting take place. There is a moment where the father strikes the son on the floor as he is lashing out with anger. A scene takes place on the football field where a character is injured; although it is very minimal. A scene takes place where the father hits the son with a plate in the kitchen which draws blood. Disclaimer: All reviews are based solely on the opinions of the reviewer. Most reviews are rated on how the reviewer enjoyed the film overall, not exclusively on content. However, if the content really affects the reviewer's opinion and experience of the film, it will definitely affect the reviewer's overall rating.