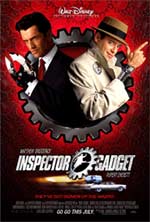 - for whacky violence/action, language and innuendo. 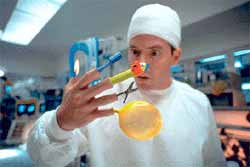 John Brown (Matthew Broderick) is a security guard who longs to be a real policeman and help people One evening, while working, he witnessed a robbery and murder of Dr. Artemus Bradford and his lab, chased after the suspect, Claw (Rupert Everett), and in the process got his car blown up leaving him for dead. Scientist Brenda Bradford (Joely Fisher), and Brown's love interest, takes the opportunity of using Brown's maimed body to transform him into a super high-tech robotic policeman. Once up and running, Gadget seeks out the identity of Artemus Bradford's murder while having to stop an evil Inspector Gadget who Claw's minion's created to rampage through the city.

When I was really little I used to watch this cartoon all the time. In fact, I recall having an Inspector Gadget action figure with attatchable gadgets. It was really cool, I just wish I knew what happened to it... hmm...

So, although the previews didn't look very appealing and Disney's track record for classic remakes have been huge bombs and complete ruins (need not to mention names, I think), I felt a need to see this movie. But after reading numerous bad reviews and hearing how much of a "kid's movie" Inspector Gadget is, I entered the theater expecting just that. And I got what I expected.

From it's overtly colorful scenes, to it's "whacky" sound effects and movie score, this movie has "kids" written all over it. But then they occasional adult themes are thrown in like Gadget making monkey noises at seeing Brenda's butt while she's bent over, or a rocket shooting out of his foot while she kisses him. The violence was really high, too. Especially when Claw's evil Gadget replica rampages through the city (which allows a great satirical mock of one of Broderick's recent other films, Godzilla). There is one off-screen murder and a scene where Gadget's car blows up before he becomes Gadget, leaving him practically dead. Also, in the same scene, Claw loses his hand 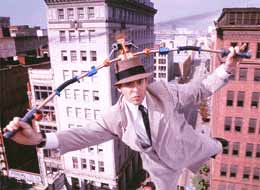 when a bowling ball crushes it (which also isn't really seen). Also, to all spider-haters like me, there's a nasty tarantula scene in this film. When they show the evil gadget in the process of being built, the camera scans his weapons and shows a plastic bubble where you can sort of make out a tarantula. Later, while the good Gadget is hanging from a bridge with the evil Gadget hanging onto his legs, a tarantula crawls out of the evil Gadget's mouth across his face and up the good Gadget's arm, who freaks out and falls, and the spider disappears (the best part about that scene).

Broderick made a good Inspector Gadget, but if it wasn't so geared towards kids, the movie could have been really good. The other characters weren't bad. Although it helped the weak storyline, they never should have showed Claw any more than his arm scratching his cat, as they did in the show. Never once in the show did they show what Claw looked like. It was always a neat mystery. Nonetheless, Rupert Everett was good as Claw.

Overall it wasn't a great movie at all, but entertaining. Decent but never rising above that (while not deserving the horrible reviews the critics gave it), Inspector Gadget earns 2 stars. But if you go into the movie expecting anything more than a kid's movie, you'll hate it. So the only reason why I found it as enjoyable as I did, is because I wasn't expecting much. - John DiBiase (reviewed: 8/5/99)

Sex/Nudity: Minor innuendo in the form of Gadget's reactions to things Brenda does.

Alcohol/Drugs: 1 or 2 instances of alcohol at a party and possibly elsewhere.

Blood/Gore: Besides severed fingers and feet, and in one instance, a head, (as in Gadget's body parts or other mechanical body parts), no real blood or gore is shown.

Violence: Way too much for a kid's movie. A murder occurs off screen and lots of explosions, shootings, fires, punches, and various other violent acts. Disclaimer: All reviews are based solely on the opinions of the reviewer. Most reviews are rated on how the reviewer enjoyed the film overall, not exclusively on content. However, if the content really affects the reviewer's opinion and experience of the film, it will definitely affect the reviewer's overall rating.