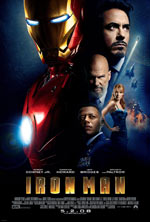 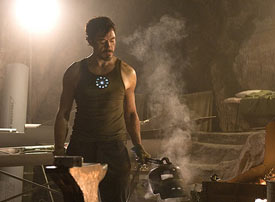 From Marvel Studios and Paramount Pictures comes Iron Man, an action-packed take on the tale of wealthy philanthropist Tony Stark (Robert Downey Jr.), who develops an invulnerable robotic suit to fight the throes of evil. In addition to being filthy rich, billionaire industrialist Tony Stark is also a genius inventor. When Stark is kidnapped and forced to build a diabolical weapon, he instead uses his intelligence and ingenuity to construct an indestructible suit of armor and escape his captors. Once free, Stark discovers a deadly conspiracy that could destabilize the entire globe, and dons his powerful new suit on a mission to stop the villains and save the world. Gwyneth Paltrow co-stars as his secretary, Virginia "Pepper" Potts, while Terrence Howard fills the role of Jim "Rhodey" Rhodes, one of Stark's colleagues, whose military background leads him to help in the formation of the suit.

Not many directors can claim they've made three great films in a row. However, actor-turned-director Jon Favreau (who makes a small appearance in this movie as "Hogan") can say so after striking gold a few years ago with the holiday film Elf, following it up with the family adventure film Zathura and now jumpstarting a franchise with 2008's Iron Man. Thanks to the success of superhero movies like Spider-Man, X-Men, and more recently, the reboot of the Batman franchise, films like Iron Man have been made possible. And since Favreau seems to have a good knowledge of what makes a good, serious superhero film, Iron Man has made it to the big screen in style. 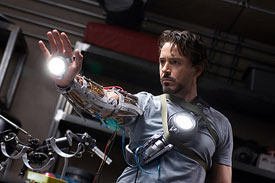 I have to kind of mention right off the bat the biggest problem with Iron Man, however -- its content. Iron Man isn't like the Spider-Man films in which the only downside may be some violence or one (maybe two) moderately disturbing scenes. Instead, Iron Man has a very adult tone throughout. This isn't your Happy Meal superhero. Tony Stark is a womanizing billionaire jerk who has to get his world rattled before he starts seeing a bit clearer. In the first few minutes of the movie, his womanizing ways are addressed and then ever so briefly "undressed" in what becomes a quick fling between him and a sexy reporter in his bedroom. While it's just them passionately making out in a state of undress before falling off the bed, it's a reminder that this isn't the PG film you can take your young ones to. Tony Stark isn't Peter Parker by any stretch of the imagination.

With that said, the movie plays out a lot more like Batman Begins than anything. It's dark, it's edgy, it's comical but ultimately serious. There's no camp. Stark isn't a goof - he's self-entertaining. Everything humorous is really for his own amusement, but is also funny for us. He's not goofing off like a Brendan Fraser or a younger Tom Hanks. The comedy is almost entirely witty dialog or a surprise physical gag (like a technicality going awry that isn't especially goofy, it's just a needed laugh at the right moment). Favreau plays his cards right with Iron Man. Stark isn't a laughing matter, so the situations turn realistic more often than not. Whether he's realizing his wicked ways for what they are and trying to change them, or trying to battle terrorists over in Afghanistan, situations are just a bit more on the realistic side. And by the time we have a central villain identified - no one's some kind of otherworldly super villain - it's kept more grounded and believable. 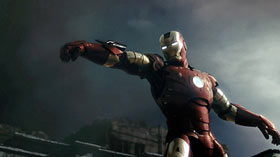 With that, it must be noted that the special effects are really something fantastic. There's hardly a moment when you're pulled out of the reality of the situation to be able to point out CGI versus real life. Iron Man's suit is utterly amazing and to watch it in action is a real joy. By the time we get that pay off to see Stark in the suit beat the pants off some baddies, there's this giddy sense of enjoyment to see what that baby can do. Robert Downey Jr. is surprisingly an inspired choice to play the title character. He may have been one of my least likely choices for this kind of role, but it's his intensity and wit and charm that make Iron Man such a great hero. And this movie is only the beginning, so it's really just the start of what could be something grand. Gwenyth Paltrow's a lovely addition to the cast as Pepper Potts, along with Terence Howard and Jeff Bridges. Everyone turns in great performances, and you kind of have to give kudos to Favreau for bringing out the best in them.

Besides the film feeling a little long at times, the only problem, again, is content. Along with some suggestive comments and the sensuality (mostly in the beginning), there is a handful of mild profanity, including a couple uses of "S.O.B," one of Jesus' name, and a couple derivatives of "God." Also, the violence is pretty intense at times. In the opening scene where some military vehicles are ambushed (no worries if you're afraid I'm spoiling anything - it's in the trailers), we see some military people shot up outside a vehicle (from Tony's perspective inside the vehicle), and it's brutal, but not graphic. The grossest and most intense thing aside from people being shot up or blown up (or doused in flames via flamethrower), is the magnet in Stark's chest. We see some blood on him early on in some scenes, including some scarring around the magnet on his chest, and then later see the magnet removed and replaced more than once in his chest (which isn't graphic, but the idea of it is kind of gross). In one instance, Pepper helps him disconnect the device and replace it and we hear some squishy sounds and see some gooey residue on her hands. The idea is more graphic than the actual imagery, but it's not exactly Saturday Morning Cartoon kid-friendly kind of stuff.

Overall, Iron Man is a truly impressive superhero flick. Jon Favreau has his best work on his hands here, even if he's inserted some edgy material that hamper it from really being the kind of movie you can bring the whole family to. I'd like to see the sexual content and some of the violence toned down a bit for the rumored sequel in a couple years, but I suppose only time will tell. Oh, and stick around after the credits for sure. It sets things up nicely for the sequel or a spin-off.

Sex/Nudity: Someone asks Stark about if it was true he'd slept with a dozen covergirls; Stark hits on a reporter and then we see her on top of him (both have some clothes on) and they're passionately making out with some movement before they fall off the bed. It's a brief scene, mostly played for laughs; In the next scene we see the female reporter wake up in Tony's bed (we see her bare back) and drape the sheets over herself. We then see her walking around in the house in just a dress shirt that's half open (revealing a bit of her bra inside); Stark and Rhodes are on his private plane and Stark tries to get him to drink. We then see the two guys intoxicated and talking as his stewardesses dance around seductively (with their stomaches showing in their shirts). All of a sudden a pole rises out of the floor and the scene cuts just as a girl grabs it to dance around (perhaps as a stripper?); We see Pepper in an evening gown that dips rather low in the front with the back being all open (and we see much of it); Some suggestive remarks are made by Stark; We hear Starks robots doing something to him and him complaining about the pain, to which he asks them to be gentle because it's his first time. We then see him in his Iron Man suit as the robots try to get him out of it

Alcohol/Drugs: We see Stark drinking in hummer; Tony and Rhodes drink hot saki on his private plane which gets them drunk; We see people drinking at different parties; Obadiah pours himself a drink

Blood/Gore: An explosion throws Stark and we see his white shirt slowly turn red in spots; We see Stark sitting in a chair with blood all around his face and head (possibly from being beaten); He then has some flashbacks of a surgery and we see quick cuts of some blood on him and on hands and equipment; Stark awakes to find some wires attached to something in his chest and we see a sort of gross scarring around a circular device in his chest; We see a man after he's been beaten or shot who has blood on his shoulder and a little on his clothes and face (and he dies); A villain has a bloody scar on the side of his head (which we see several times); Stark removes the device from the center of his chest and has Pepper help him switch it out for a newer one. She disconnect it (it's gross to see her reach into the metal cylinder in his chest and we hear squishy sounds because of the liquid/lubricant inside). He reacts to her touching some things with pain and we see her pull her hand out with some clear goo on it; A man holds a device up to another man that makes some veins show in their face. He does it again later to Stark and we see his face turn blue.

Violence: Quite a bit of action violence: We see people shot up outside their vehicles (not graphic), and some vehicles blow up; A man is seen held captive who may have been beaten/tortured; Some men are shot and killed; Someone shoots Iron Man (mark 1) point-blank in the head and it ricochets off and kills them; A man's face is scarred after an explosion knocks him out; Iron Man accidentally causes a plane to crash; Iron Man attacks some terrorists who threaten some innocent civilians; We see photos of a town desolated by Stark's weapons; A villain has a device that temporarily paralyzes their victims, causing veins to show in their skin and their face to turn blue-ish; Iron Man fights Iron Monger for extended sequences, etc... Disclaimer: All reviews are based solely on the opinions of the reviewer. Most reviews are rated on how the reviewer enjoyed the film overall, not exclusively on content. However, if the content really affects the reviewer's opinion and experience of the film, it will definitely affect the reviewer's overall rating.