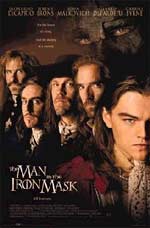 The Man in the Iron Mask

- for sequences of violence and some sensuality/nudity.

Leonardo DiCaprio's newest flick will be giving the young ladies a double dose of DiCaprio. The Man in the Iron Mask is the story of Louis the Fourteenth who ruled France cold-heartedly & even lustfully. He chased after any woman who seemed bed-worthy & discarded them like Charmin toilet-paper just the same. It was at a time after the Three Musketeers had dispanded. Aramis (Jeremy Irons) had become a priest, & Porthos(Gérard Depardieu) was just a "chick-chaser," if you will. Athos (John Malkovich) was taking care of a son who was going to be a musketeer, & the "fourth musketeer," D'Artagnan, was the head of the military. When King Louis caused Athos's son to die so he could have his fiance, Athos feels the king has gone too far, and this event, among others, sparks the reuniting of the 3 musketeers. Realizing that there is a man in an iron mask in prison, they rescue him from prison, in a plot to rid England of Louis. The man in the iron mask turns out to be Louis' twin brother, Phillipe who was imprisoned & covered with an iron mask because his likeness placed a threat on Louis' thrown- yet Philippe never knew this. The movie continues on from there with a series of events, including the attempt to replace Louis with Philippe. If your looking for a swash-buckling action/drama movie with a hint of romance. Check out this fine film-- directed by Robert Wallace, a devoted Christian.

This movie, was over-all very well-done. I have never seen any of the original versions of the movie, so i can't compare- but i think all the 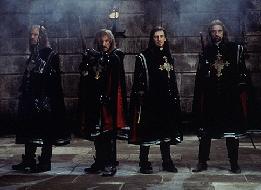 actors & actresses did a fine job, despite what the critics do say. Again, the PG-13 rating was well-deserved. The sex scenes, & minor nudity, along with some innuendo, earned it this rating. It was also very violent- yet i must say it probably was not worse than Disney's Three Musketeers a couple years back (I did see it). I can't stand movie critics. Please allow me to go off on a tangent here... i always seem to like the movies they give lousy reviews, and they seem to praise the slimey, scummy lousy movies. I just don't get it. Well, anyway. I think i'll drop it. But this film was really good, despite the inappropriate material. And the language was pretty good, with only one "s" word used & about 2 other objectionable words. It was very violent but not all that bloody. Scenes with blood are so quick it's not bad at all. That was rather tastefully done. The acting was good, the plot was good, & I don't see any reason why the critics attacked the dialog. I thought it was all good & a very well-done action/drama.

Sex/Nudity: Quite a bit. Mainly sex. In one scene, as the camera pans across the bedroom you see the walls & hear sexual noises, & as they get to the bed, the king & his mistress roll off each of each other. Another scene, he is in bed with a woman & you can see her whole side bare, with her arm & his covering her chest. Another scene reveals him & a girl in bed kissing, clothed & the girl is wearing rather revealing garb. In one scene, Pothos comes out of a haystack after you hear sexual noises & there were 3 women underneath with him - all of them are clothed. Later we see Porthos try to hang himself & we see several rear shots of his bare butt.

Alcohol/Drugs: Some people drink wine during the film.

Blood/Gore: We very, very briefly see in a fight scene: a throat cut (very quick & very little blood), a face cut on the side, & another bloody face, mainly around the nose. Earlier, a man is stabbed & there's blood on the sword. Also, we see a person has successfully hung themself.

Violence: Quite a bit. A lot of stabbings from sword play, deaths by gunshots, people held at sword or dagger point, punches, cannon fire, etc. Disclaimer: All reviews are based solely on the opinions of the reviewer. Most reviews are rated on how the reviewer enjoyed the film overall, not exclusively on content. However, if the content really affects the reviewer's opinion and experience of the film, it will definitely affect the reviewer's overall rating.