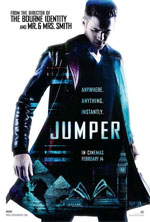 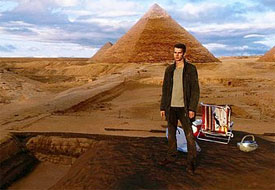 A genetic anomaly allows a young man to teleport himself anywhere. He discovers this gift has existed for centuries and finds himself in a war that has been raging for thousands of years between "Jumpers" and those who have sworn to kill them.

Jumper is the latest sci-fi novel to get the film treatment, promisingly handled by Bourne Identity and Mr. and Mrs. Smith director, Doug Liman. The story revolves around a teenager named David who suddenly discovers one day that he has the amazing ability to teleport from one location to another. The story develops further as David soon discovers not only is he not the only "Jumper" in the world, but that there is a clan of non-Jumpers whose main goal in life is to hunt down and destroy all Jumpers. Jumper ends up turning into a full-fledged sci-fi action film that stretches reality to make way for some fun and interesting sequences.

This is actually the first film I've seen Hayden Christensen in since his turn as Anakin Skywalker in the last two Star Wars prequels. And Christensen plays David Rice not especially different from Anakin, although the script here is only slightly better than Lucas's work for the prequels. Christensen just isn't an engaging actor, but he does well enough here as Liman and company spin an imaginative tale about ordinary people with extraordinary abilities living in our world. While any number of other actors in this same role may have made David's character more intriguing, the script for the film possesses the film's greatest problems. The story leaves a lot of questions unanswered, which is fine if more films are made to explore this storyline, but in the case that that doesn't happen (which is likely given its extremely poor reviews by the critics), then this film as a standalone action flick fails to be complete. But with the movie just barely being an hour and a half, perhaps filling in some of the story's holes and extending it just a bit longer could have strengthened its outcome just a bit. Liman gives nearly constant action - particularly near the film's climax - maybe even to the point of overkill. Still, as a popcorn movie for pure entertainment, Jumper delivers. 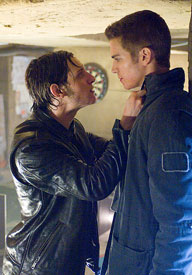 I suppose you don't really go to movies like this expecting anything less than crazy effects and action sequences, and that's ultimately all Jumper really is. But after the film, if you try to discuss what you'd just experienced with a fellow viewer of the movie, you're likely to be able to pick out all the unanswered questions or bizarre mannerisms. An example of the latter would be Rachel Bilson's character Millie who is all too eager to run away with David after he shows up eight years after disappearing. Sure she asks him several times who he is and what he's been up to, but she's all too trusting and it just is difficult to buy into. David's behavior as a teen running away from his problems while trying to master his newfound ability are believable, but it seems all too many other characters around him aren't quite realistic. Probably the most charismatic and fun to watch character of the film is Jamie Bell's Griffin, another Jumper who David discovers has been watching and following him for years. Griffin's a little fireball who isn't quite a villain or a hero when it comes to how he carries himself. But pitting Bell against Christensen in almost any scene just reveals how bland of an actor Hayden really is. Lastly, Samuel L. Jackson fairs okay as the film's central villain, and I couldn't help but get a kick out of watching Jackson beat on Christensen since they starred together last in Revenge Of The Sith, with their last encounter in that film being particularly unfortunate for Jackson's character. Samuel L's Roland is a bit cartoonish with the chalk-white hair and electrifying gizmo he uses against the Jumpers, and there was something about his presence here that just kept reminding me of his work in Unbreakable. Jackson often plays tough characters you won't want to mess with, but he just isn't a really strong actor other than being tough or intimidating.

The content was about as rough as you can expect from a Liman-directed film. Griffin tells David to "f--- off" in a scene, which I felt didn't fit in the kind of genre film, and an assortment of other profanities make an appearance. There is one subtly implied sex scene and another more sensual encounter where David and Millie disrobe while making out before the scene soon cuts away. Finally, there are heaps of violence, but only one gruesome moment really stands out, as a character stabs another in the stomach with a large knife, then slices upward towards the chest. It's not really graphic, but the stabbing and motion are shown and it's rough to say the least. I'm sure part of the reasoning behind including a lot of the edgier material was to give the story a "realistic" grounding in today's world, but - as usual - it was unnecessary and actually felt pretty out of place here.

I definitely found myself enjoying Jumper more than I thought I would. The action sequences are for the most part entertaining and fun to watch, and to see the characters jumping around the globe to real locations (and not just digitally-created ones) made the film feel a bit more tangible. The content is too rough to recommend, however, and definitely not one for the family to join in on. Jumper is certainly not for any movie fan looking for a fantastic script and Oscar-worthy acting. Only those looking for an entertaining, albeit imperfect, sci-fi action film will even want to consider Jumper. I'd definitely be interested to see this story continued and developed further. As always, if you have any questions or comments about the film before you see it (if you, for some reason, decide to), feel free to contact me.

Sex/Nudity: David takes a woman to a hotel room or something after meeting her in a pub. We see him looking out the window, shirtless, while she lies in bed, and he then leaves (implying they slept together); Millie and David kiss passionately and begin disrobing. We see Millie without a shirt in just a bra (her pants are still on), and she falls onto the bed as David helps her get her shoes off. The two then fall on top of each other on the floor and the scene ends there

Alcohol/Drugs: We see some characters drinking in an Irish pub; David has a drink in a bar; David's father drinks some

Blood/Gore: We see a person get tied to a tree, then a man walks up to them, unwraps a large knife and stabs them in their stomach and cuts upward to their chest, killing them (all shown, but not especially graphic); A presumably dead man has some dried blood on his face in Griffin's hideout; David has some blood on his face

Violence: Lots of action violence. To note - when the Jumpers are subdued, they're zapped with wands that electrocute them to prevent them from jumping, and will strap them down with grappling hooks fired from these wands so that they might be executed; We see someone held down and stabbed to death; There are many action scenes with physical combat; A person uses a flamethrower in a couple scenes; etc... Disclaimer: All reviews are based solely on the opinions of the reviewer. Most reviews are rated on how the reviewer enjoyed the film overall, not exclusively on content. However, if the content really affects the reviewer's opinion and experience of the film, it will definitely affect the reviewer's overall rating.