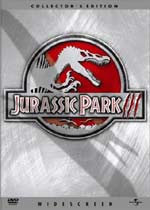 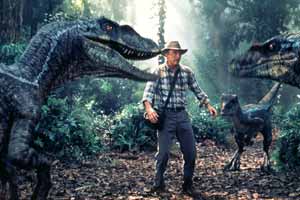 It's 8 years after the first Jurassic Park incident. Dr. Alan Grant (Sam Neill), had continued his work as a palentoligist, especially interested in velociraptors. When Paul and Amanda Kirby convince Grant with their checkbook to be their guide on an aerial tour of Isla Sorna. When the trip goes horribly wrong and they end up stranded on the island, they learn that not only is it the wrong island that Dr. Grant was on (he was on Isla Nublar, Sorna featured "Site B" as in The Lost World), but he soon learns of the real reasons why the Kirbys have brought Grant to the island...

As much as I do enjoy and get excited about the return of characters and overall plot elements in sequels for films I greatly enjoyed, I'm often let down by the outcome of the sequel, where it's usually less imaginative, less organized, less exciting, and less original. But there's something about seeing the same characters again that can make you feel like you're revisiting an old friend. In a way, fans of the first Jurassic Park film may feel this way with the return of Sam Neill as Dr. Alan Grant. I just watched both films again prior to seeing Jurassic Park 3, the third installment in the series of films set out to cash in on the audiences' craving for new dino flicks. So what in the world is Jurassic Park THREE?! Why a third?! Can you really do the SAME idea over and over to beat the idea deep into the ground? Man plays God to make dinosaurs, dinosaurs escape, dinosaurs chase/hunt humans, humans fight back, humans escape? Do we need THREE movies with this same underlying plot? I don't think so. But then why in the world did I give it 3 stars? It's allll in your mindset folks.

Do you know that feeling that you only get when you see a movie for the first time. You never ever ever experience that feeling again. It's the excitement (well, depending on the genre, we're discussing action/adventure films here), the suspense, the feeling that you have pretty much little to no clue what's going to happen next. The second time around, it may still be suspenseful, but you know everything that's going to happen. Wouldn't you like to re-experience that exciting feeling? That suspenseful thrill ride? How about if the same idea is delivered, but just in a newer, fresher way. Maybe it won't be as new or inventive, but it's still fun and exciting. Something to see with friends, something to pass a couple hours with brainless entertainment. Well folks, fans of 1993's Jurassic Park got to experience the thrill and wonders of the film four years later in a fresher, more simpler way in 1997's Jurassic Park: The Lost World (aka Jurassic Park 2). Well, once again, four more years later, viewers can be reminded how exciting it was to see dinosaurs reimagined on your local theater's big screen as you watch an interesting cast assembled to battle nature in Jurassic Park 3. The more I ponder it, the more I can't believe a third was made. For the third installment, the plot isn't exactly all that engaging, unique, or magnifiscent, but it's adequate enough to offer the audience more thrills, bigger dinosaurs, and more excitement.

JP3 is indeed intense. Many may argue it's old pre-trodden material that's not only been done once or twice, but now three times, but I must present the side that it's similar, but different. Dinosaurs finally get to see Pteranodons wreak a little havoc, along with the introduction of the bigger, meaner, nastier Spinosaurus... who apparently can see you whether or not you move (the satellite phone scenario with the Spinosaurus is hilarious). While the film's script wasn't the best, and could have been a lot different, it's once again adequate enough for the film. And although the movie does smell a lot like a typical sequel, it rises above the let downs of Dr. Dolittle 2 and the action over-stuffed The Mummy Returns (which I still have a love/hate feeling towards). What saves JP3 from utter and complete ruin? The cast, the amazing realistically depicted dinosaurs, and the introduction of newer ones.

Besides some all-out violent content in this film, sex and nudity is barely present with a brief glimpse of part of Amanda in her bra as she changes her shirt. As far as language goes, there's 1 possible "s" word (hard to hear above the roar of the scene-- no pun intended there), as well as a few "d*mns" and "h*lls," with that being the extent of the language. Violence is off the board with each character showing varying amounts of bloody scrapes and cuts throughout the course of the film, and several instances of characters being attacked or eaten by the dinosaurs. Jurassic Park 3 indeed offers bigger, but is not better than the original film (and is arguably better than The Lost World), but clearly offers an excellent action/adventure film for the viewer's pleasure. While the first Jurassic Park was more wonderous, well-written, and unique in its delivery, it had a slightly more realistic feel to it than of it's 3rd production. But this matters not, again, if you're just looking for some exciting, fun eye candy.

Overall, I thought the movie was pretty good. I thought it was near-excellent for a third installment in a franchise, but would have fared better from a stronger plot and a stronger script. The film is a lot more violent than its predecessors (which also may be due to different direction, considering Steven Spielberg isn't behind this one) and is not suitable for younger children. It should have been toned down more like the first film, but regardless, due to its exciting outcome and worthy effort, I still grant Jurassic Park 3 3.5 stars for its fun nature despite its unoriginality. Please read all the content details carefully.

Sex/Nudity: We briefly see Amanda in her bra as she changes her shirt.

Alcohol/Drugs: Some of the characters have drinks at a resturant

Blood/Gore: During the course of the movie, we see the characters have varying degrees of bloody scrapes, cuts, etc on their bodies. After two men vanish from a boat, we see bloodstains on deck from a distance. The spinosaurus grabs a man and we then see blood splatter onto the windshield of a plane taking off. As a T-Rex is eating, we see blood on its mouth and flesh in its mouth from the animal carcass it was eating. A dead and mostly decomposed human skeleton swings down from a tree and collides with Amanda. We see a raptor dig its claw into a man's back (not the actual contact, but we know it's happening. We then see the man from a distance with a non-gory bloody spot on his back. Later, the raptor quickly bites his head and snaps his neck. We see Pteradon babies attacking Eric as well as some attacking Billy. Both result in an increasing number of bloody scrapes on both.